The Kids Are Alright - Fiorentina 3-0 Pandurii

Fiorentina fielded a squad of backups and youngsters today and it paid off with a great result and their third straight Europa League victory.

Share All sharing options for: The Kids Are Alright - Fiorentina 3-0 Pandurii

Fiorentina continued their romp through Europa League group play today with another win, 3-0 at the Franchi against Pandurii. Coach Vincenzo Montella shook things up by bringing in 8 different players into his starting lineup then which started in an epic victory over Juventus.

Norberto Neto, not to be confused with Hagrid's Norbert of Harry Potter fame, started in goal again, but he had a different line in front of him. Gonzalo Rodriguez, given the captain's armband today, anchored the center of the line with Marvin Compper, while Nenad Tomovic and Marcos Alonso on either side.

The four man midfield was composed of Borja Valero and Marko Bakic in the center and Joaquin and Matias Fernandez out on the sides. Oleksandr Yakovenko and Ryder Matos filled out the front line.

Pandurii fielded a guy named Alex and another named Eric plus a bunch of guys with nearly impossible to pronounce names, at least if the announcers I listened to were any indication.

The game started off in a rocky fashion for our home standing purple avengers, as Pandurii hit a ball off the cross bar before the seats, at least those that weren't empty, even had a chance to get warm and Neto was called on for a save soon after.

but after about 20 minutes, Fiorentina began to settle down and began to exert pressure on the visitors and it paid off with a nice pass from Bakic to Rodriguez, who slotted the ball to Joaquin who split a couple of defenders, poked the ball forward and then dribbled around the goalie for an open netter to get the home team on the score board.

Only 8 minutes later, "Midnight" Ryder Matos, stripped the ball from a defender and charged in all alone on the goalie. Razvan Stanca managed to poke the ball away temporarily, but young Matos settled the ball, turned and poked it past the goalie for the second goal.

The second half started a bit rocky as well for Fiorentina, but by minute sixty, Juan Cuadrado came on and scoed within 10 minutes to put the game out of reach.

Fiorentina remain perfect in the group with 9 points. In the other match of the group today, Dnipro beat Paços de Ferreira 2-0 to remain in second place with 6 points.

Neto(7) - 4 saves and another clean sheet, at least two of them of the very nice kind. Don't recall any bad clearances either.

Tomovic(6.5) - looked very good on offense, got caught going forward one time, but Rodriguez came over to clear it away. Pretty good match for Tomo.
Rodriguez(6.5) - very solid, granted it was Serie quality, but nothing to complain about.
Compper(6.5) - Filled in nicely, again, questions about the quality of the opponent, but he played his role just fine
Alonso(6) - took a while to get heated up and seemed to take the match off in the closing minutes, but it was one of the few, if not the first, times he's played a full 90 minutes.

Bakic(5.5) - very rough start for the youngster, more passes to the other team than to his own, but he settled down halfway through the first half and began to ditrisbute the ball nicely with short passes out to either side, started the play that lead to the first goal.
Fernandez(6) - Rough start, along with the rest of the midfield, but settled down and played a pretty good match.
Joaquin(7) - Awesome one on one play for the first goal. always a threat. nice to have him as an option.
Valero(7) - Played more of a defensive midfieler role today, but was solid as always.

Matos(7) - Amazing play on his goal, had other plays that could have been dangerous. I think he's going to turn out to be an amazing player.
Yakovenko(5.5) - Other than an assist on the Cuadrado goal, didn't do a lot for me. he'll need to do better.


Subs
Cuadrado for Matos (6.5) - great shot for a goal, really was the only one trying to do anything in the closing moments.
Roncaglia for Rodriguez (NA)
Aquilani for Valero (NA)

"WE used several different players because we used up a lot of nervous energy on Sunday against Juventus.

"bakic started roughly because he was a little tense, but played very well in front of the defense and by the end of the match he was running the midfield. He will be able to grow up here with us, although it will take time for him to reach peak form."

"Joaquin put in a great performace. He is of exceptional quality, but finding the right level of consistency."

"He and I took a while to come to an understanding, but now he has settled into the team and understands my instructions. he just needs a few more weeks to find his form. 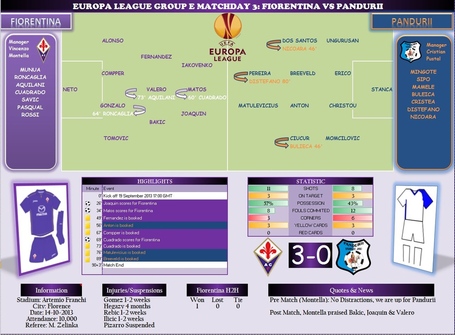 Big, big match this weekend, even though it's against a team currently in the relegation zone. These are the matches are the ones la Viola need to win, even if it's on the road, expecially with matches agaisnt Napoli and Milan up next.

One bit of blog business to add here.

We're still looking for a contributor to contribute to the Monthly magazine for October. Let me know if you're interested by posting here or e-mailing me at Slakas@yahoo.com