Turn The Beat Around!

Amazing day at the Franchi as Fiorentina come back from the dead and turn the game upside down with 4 goals in the space of 16 minutes to beat 2 time defending Serie A champions, Juventus.

Share All sharing options for: Turn The Beat Around!

Fiorentina proved to its fans today that it never wise to give up on them. Many of them, myself included, had given this game up for lost, but today showed that being fickle is not wise with this squad.

Things looked glum for la Viola, as they looked unable to even threaten the Juventus goal for much of the first half and after a generous penalty given to Carlos Tevez and a Keystone Cop-like defensive effort on the second goal by the Bianconeri it seemed our worst fears were here to stay.

Pre-season headlines were full of Mario Gomez, but Guiseppi Rossi is doing his best to show Daniele Prade's genius by putting the league on it's ear, scoring a hat trick today in 14 minutes of play and now leads the league with 8 goals.

Newcomer Joaquin also scored a wide open shot and Fiorentina handed Juventus it's first league loss since February and the first loss for the hated rivals at the Franchi in 15 years.

Vincenzo Montella fielded a 4-3-2-1 Christmas tree formation in front of Norberto Neto, with Facundo Roncaglia out on the right, Gonzalo Rodriguez and Stefan Savic in the middle and Captain Manuel Pasqual out on the right.

Alberto Aquilani, David Pizarro and Massimo Ambrosini played in the back of the middle field, with Borja Valero and Juan Cuadrado as the Attacking midfielders and Guiseppi Rossi played the lone forward.

Antonio Conte's Juventus played a 3-5-2 in front of Gianluigi Buffon, with Leonardo Bonucci centering the back line and Andrea Barzagli and Giorgio Chiellini to the right and left, respectively.

Simone Padoin and Paul Pogba lined up the right of Andrea Pirlo, while Claudio Marchisio and Kwadwo Asamoah on the left. Carlos Tevez and Fernando Llorente played up front.

The match started off evenly, with both team looking fairly rusty from the break and neither squad had much luck with chances.

Nearly immediately, play had to be stopped as Rossi needed work from the trainers as he was complaining of back pain. The forward was able to continue, however.

It took 14 minutes before either squad could get off a shot, as Rodriguez gave up a deep free kick and Pirlo took a shot at the net, which was blocked by the wall on the way in.

Tevez got the next shot and got the ball on net, but Neto extended himself and knocked the ball wide of the corner it was heading to.

At minute 21, Roncaglia got the first Fiorentina shot, but it was from way out and wild and went wide and high.

At minute 23 Ambrosini had to come off with a thigh issue and Matias Fernandez came onto the pitch.

over the next 5 or 6 minutes, Neto and Buffon exchanged saves, on Roncaglia and Marchisio.

The next 5 minutes were fairly even but then Tevez went down in the box, fairly easily in Fiorentina fan's opinion, but the Ref called it and Tevez scored the penalty easily.

The goal seemed to energize Juve and demoralize la Viola and only 3 minutes later, Cuadrado scuffed a clearance into the air, Neto had come out of his net to get it and it was wide open for an unmarked Pogba, who made no mistake and, to all intents and appearances, the rout was on.

Rossi had a chance before halftime, but missed to the right and the teams went to halftime 2-0.


Second half started out much the way that it had ended, with Juventus getting the first 5 shots off, but Neto kept Fiorentina in the match, time and time again.

Montella then made his move, bringing in Joaquin for Aquilani, who really had not done much all match.


Immediately after, Savic took down Pogba, earning a yellow card and giving Pirlo another chance, but Neto stepped up and tipped the free kick up and over the bar.

however bringing in Joaquin did pay some dividends as Fiorentina started to take momentum back as Fernandez got off la Viola's first shot of the half, just wide.

Finally, Fernandez drove the box at minute 65 and was taken down by Asamoah, resulting in the penalty call. Rossi made no mistake, but it really still felt like nothing more than a consolation goal.

Juventus continued to press and got off the next two shots before lightning would strike as a triple teamed Rossi managed to find the corner of the goal to tie up the match.

That goal seemed to put Juve back on it's heels and enervated Fiorentina and two minutes later Valero found a wide open Joaquin and the stands went crazy.

Juventus tossed the dice and threw everything forward, but two minutes later, Cuadrado broke loose on the counter and found Rossi wide open on the right and Rossi completed the hat trick and finshed off an amazing day for Viola fans world wide.

The win, temporarily at least, put Fiorentina in 5th place ahead of Inter, who play later today and kept la Viola on pace with Roma, Verona, Atalanta and Milan, all of whom won this weekend.

Neto(7)- Probably would give him an 8 if it weren't for how bad he looked on the second goal. he made 6 saves, one of them off his chest while one on one with an Juve player and kept Fiorentina in the match and allowed them to come back. He still can't clear a ball to save his life, and his decisions on coming out of the goal remain to be in question, but today, at least, he's our guy.

Roncaglia(7)- Great effort by Facundo, both on offense and defense. He was probably our best defender out there today.
Rodriguez(6)- Gave up way to many free kicks to Juve by being slow and out of position, was invisible on free kicks and plays in the box and had at least one out of control lunging tackle right outside the box, which could have been costly had Pirlo been on his game. We need a bit more from him.
Savic(6)- Savic also had some rash tackles and gave up free kicks deep in the zone.
Pasqual(6)- Pasqual annoyed me to no end for about 60 minutes today with  horrible passing, slow, plodding play and just generally getting in the teams way. Later it seemed like he deferred to Fernandez and played more defense, which gave Fiorentina more room and ultimately they took advantage.

Aquilani(5.5)- Really did nothing for me today, perhaps it was fall out from his international play. Once he was subbed out the team seemed to take off.
Pizarro(6.5)- Also possibly because of fatigue from the break, Pizarro just didn't seem himself for most of the match. The insertion of Fernandez and Joaquin seemed to take some pressure off him and he seemed to light  it up a bit towards the end. He could probably use some rest this week.
Ambrosini(NA)- Really had no effect on the match and came out injured with a thigh problem.

Cuadrado(6.5)- Also a tale of two matches for Juan. Horrible first half, couldn't pass to his own team, did nothing really for me at all. Second half he seemed to figure it out, started drawing a lot of fouls on Juve and got them back on their heels. His two on one counter for Rossi's third goal was about as perfect as could be.
Valero(7)- Valero had his usual solid match, the time off did a lot for him I think. He stole balls, won challanges, made perfect passes and was a big factor on several of the goals.

Rossi(8.5)- Played through pain, he went down with a bad back early, but stuck it out. Didn't get discouraged with the lack of space and made no mistake on the PK. His second goal was amazing and really catapulted the team to the win.

subs
Fernandez(6.5) - (for Ambrosini - injury) Fernandez really didn't make much of an impact until the second half when he began to take over the left side from Pasqual and started charging Juve defenders and drew the penalty.
Joaquin(7) - (for Aquilani - tactical) Joaquin coming in made a huge difference as Juve couldn't account for his speed and Cuadrado on the other side. Made no mistake on his chance.
Matos(NA) - (for Rossi - tactical)

Montella(7)- It was a tale of two of matches really and there were a lot of questions in the first half, but the additions of Fernandez and Joaquin, as well as switching Cuadrado to the other side, really turned the tide for Fiorentina. Montella is going to have to return the team to Earth for the next two matches and maintain focus.

Rizzoli(5) - both penalties seemed very generous and affected the momemtum of the match, which is exactly what's wrong with Italy and the refs, in my opinion. The best ref is one you don't have to talk about. Also, Juventus were called for more than twice the amount of fouls that Fiorentina were called for (25 to 11). Granted, some of that is a result of the possession advantage that la Viola had and their attacking style, but that lopsided stat could be commented a lot, as well as the penalty calls will be a talking point as well.

"This is certainly amongst my most enjoyable victories. The first half was balanced, but Juve made the most of our errors, most especially on the second goal."

"Juventus didn't allow us much space in the middle after the break and we looked unable to score, but Calcio is wonderful and the penalty changed the momentum of the game."

"I thank the fans, who had perfect behavior and at times believed in this result more than we did, perhaps."

"These were three very important goals, but we had a great performance in the second half."

"Montella told us to give more because we were a bit scared after the first goal. We listened and did what he wanted. We are so happy."

"I think we had the game practically closed. We were in control in nearly every way, even in the second half and had very good chances to add to our score."

"But then something strange happened. We lost the match that we had dominated."

"How to explain it? Explaining it would be easy. In 10 minutes we destroyed all our hard work, both during and before the game. We allowed Fiorentina back into the match and conceded bad goals." 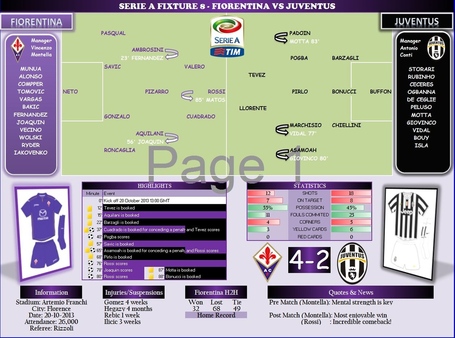 Fiorentina continue their European Campaign on Thursday, hosting Pandurii. The Romanian squad was tagged by nearly everyone to carry up the rear in Group E, but surprised everyone with a 1-1 draw in Portugal against Ferreira, putting them currently in third place in the group. Fiorentina will need to pay attention and not let the euphoria of this comeback victory distract them from the business at hand. I expect to see a lot of the regulars get the match off, or at least play reduced minutes.

Next Sunday is another trap for la Viola, as road matches against teams they should beat have historically been hard for this squad and with matches looming against Napoli and Milan, anything less than three points is necessary or acceptable.

In Fiorentina's favor is that this season they have shown themselves perfectly competant on the road, winning 2, drawing one and only losing one match, and that one to Inter, while outscoring the home teams 8 to 4.