Fiorentina's dreadful 2013 start came to a welcome respite last week as Fiorentina were able to salvage a 1-1 draw with an in form Napoli at the Franchi. Favorable results today with Lazio and Juve leave the viola in an excellent opportunity to relaunch themselves into the upper sides of the table. 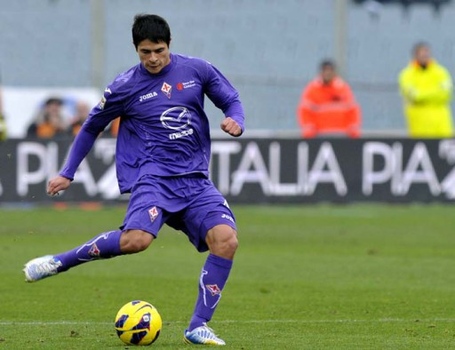 Despite the results over the last few weeks, Fiorentina are still a project in progress, seen this week as we heralded the arrival of Rafal Wolski, Marcelo Larrondo, Matias Vecino, and Marvin Compper. Fiorentina have been surprisingly busy on the winter market and with Della Valle promising a substantial investment in the summer, things are looking up with or without the results.

However it's the results that get us to the point where we are now. Struggling with a sterile attack and a midfield that seems to be passing over their own feet. Last week, Fiorentina managed a draw with an in form Napoli, featuring a superb but lucky Roncaglia lob all the way from the viola half. Jovetic and Toni are struggling to find the magic that saw them fly through the first half of the season, and as transfer rumors fly through every position on the field, it's up to every player to prove to Montella why they deserve to be in Florence.

Catania is celebrating an excellent season thus far, sitting in 8th and dreaming of a Europa League berth as a win tomorrow could see them leapfrogging Roma and Milan and nestling right behind Fiorentina's back. Catania are on the heels of back to back wins with Roma and Genoa, but they've struggled all season against the Milanese sides as well as Palermo and Juventus. Featuring the fearsome Argentine force of Gomez, Barrientos, and Castro, and led by Rolando Maran, Catania have been scorching Serie A with an entertaining brand of South American football.

Fiorentina's attack is stemming from an unenthusiastic forward line, and the lack of consistent drives from midfield which often have seen a winger tripping the ball over to the defending side. Aquilani has led the midfield goalscoring drive with four, while Cuadrado, Pasqual, Romulo, Pizarro and Borja have one, and Migliaccio and Mati Fernandez have yet to make a goal line impact. The idea of an entertaining tiki taka style like Barcelona seems to have become a side note, as much of the attack is sent over to Jovetic who seems to be taking desperate last minute shots and straying too far off from goal lately, or Toni who trips over his own feet when he tries to dribble. Ljajic is capable of moments of brilliance (see his Lazio goal) but seems to have his head in the clouds at crucial moments. Here's to hoping that a rejuvenated attack with new signings might be able to recapture that last brilliance.

Mati Fernandez and Pizarro as well as the new signings will remain in Florence while Larrondo joins his new team on the way to the island. Neto is once again back in goal (while Viviano has his bags half packed) with Savic, Roncaglia, and Gonzalo. Migliaccio fills in for Pizarro with Borja and Aquilani, while Cuadrado and Pasqual back up JoJo and Toni.

Catania starts with Andujar in goal, covered by Marchese, Spolli, Legrottaglie, and Alvarez behind Paglialunga, Biagianti, and Izco, who support the Argentine trio of Barrientos, Castro, and Papu Gomez.

The key to this match is going to be cutting down Catania's forward three. Tight marking will be needed especially around the talented Gomez, while the defense will have to be sharp to avoid any nasty counter attacks. If the forwards can work in the right way, we can start our climb back up the table.