Down But Not Out: Fiorentina-Napoli

In what has been a dismal start to 2013, Fiorentina face a trial by fire as they try to revive their spirits against an in form and supercharged Neopolitan side at the Franchi.

Share All sharing options for: Down But Not Out: Fiorentina-Napoli 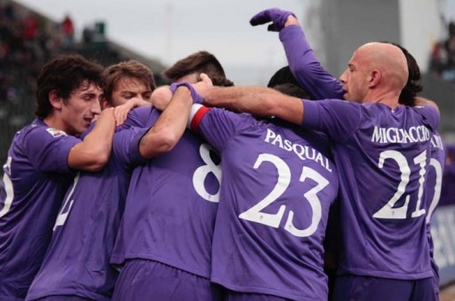 Fiorentina are facing their first mini-crisis of the season. Aquliani and Pizarro are facing knocks, reported arguments with Viviano and Roncaglia have been reported, and a mid-week knockout of the much wanted Coppa Italia in an unfortunate match against Roma have left fans with a slightly bitter taste as we go to a lunchtime matchup with Walter Mazzari's Napoli.

Napoli have had a sort of revival this week. With two of their players now off suspension, and a 2 point deduction reinstated, the Neopolitans are flying high on the upper reaches of the table and are storming under a 3 game win streak, the latest coming from wins against Roma, Siena, and Palermo. However Napoli aren't without their faults. They fell twice to Bologna, both at home, and both to 90 minute goals, and on the road they've suffered defeats in Turin, Milan and Bergamo, held by Catania in a scoreless draw, and just narrowly edged Sampdoria and Cagliari. It's safe to say that Mazzari's men are tough, but not unbeatable and the Franchi has always been one of Napoli's weak spots.

Fiorentina have struggled out of the winter break. A consecutive set of defeats have seen them drop to 5th, and a mid-week loss to Roma knocked out the wind from their stride. Rumors came abound that Montella had punished Roncaglia for his undoing against Pescara with a short bench spell, while he looks set to possibly make another goalkeeper rotation and give Viviano a second chance. With Montella, the decisions are always made at game time and nothing is for certain just yet. Fiorentina were active on the transfer market this week, hauling off Ruben Olivera to Genoa while heralding the arrival of Marcello Larrondo to Florence. Fiorentina are also said to be closing for Rafal Wolski, either for the end of the month or for summer, while Matias Vecino looks to arrive in the next week or two.

Although Montella has sworn Fiorentina are not facing an identity crisis, eyebrows were raised when a despondent looking Roncaglia left training on Thursday, prefering not to speak with the fans and seemingly disturbed. The eventual knee jerk rumors started and by the end of the week, it had been known that the Argentine was integral to the squad and would regain his place in the starting XI as of this week. Different story for Viviano, who allegedly threatened to ask for his own transfer, should he not be considered for a starting place this week. A possible return to Bologna could be in the works as Fiorentina are valuing names such as Bizzari, Rosati, and Stekelemburg. The dream however remains an approach to Pescara's Perin who is also accosted by Milan and Napoli.

Montella's picks for the week are a rebus for a majority of the team. The Neto-Viviano rivalry will be known at game time with the Brazilian possibly holding the upper hand. Roncaglia returns with Savic and Gonzalo while the biggest mystery of the day revolves around midfield. While Cuadrado and Pasqual retain the wings, Borja could be partnered with either one between Pizarro and Aquilani or neither of them. Romulo could reportedly take the place of Aquliani while Migliaccio would fill in for Pizarro. Up front Toni will take his place back, starting with Jovetic. Curious is the exclusion of Mati Fernandez from the roster whose difficult start to Italian football is making itself known.

Mazzari comes to town with De Sanctis in goal, covered by ex capitano Gamberini, Capagnaro, and the returning Cannavaro. Ex man Behrami partners with Inler giving support to Hamsik, Maggio, and Amero, who will lend service to Cavani and Pandev.

Fiorentina's problems at the moment stem from up front. Unfortunate against Roma, the strikers are facing a negative period with Montella's midweek comments suggesting he's expecting "more from Jovetic." A bungled and haphazard defense was pried open by Udinese last weekend while Neto fumbled the third into his own net. Sharpness is the key this week. Strikers like Cavani are rarely off point and crowding the midfield and limiting space while opening ours is going to be the key to this match. Hope for a minimum of a draw. But with the right attitude, even the three points are still very possible.