After a shock loss at home to Pescara last week, Fiorentina fly into the second half of the season hoping to recapture the spirit which saw them living large through the winter. Fiorentina face off against Udinese at the always treacherous Stadio Friuli where Fiorentina must absolutely be at the top of their game. 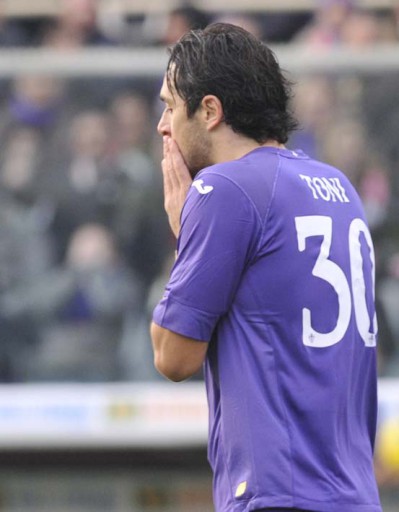 2013 started in the worst ways for our beloved viola. Lowly Pescara sliced open the defense, outwitted the midfield, and frustrated the attack as they went for a 2-0 win and ending Fiorentina's dominance at the Franchi. In other words, it was the kind of victory that was bitter. Fiorentina head to a potentially dangerous matchup against Udinese at the Friuli to kick start the year the right way.

Fiorentina can already boast having defeated Udinese twice this year, once at home and then once again in Udine, knocking them out of the Coppa Italia. The zebrette flexed their muscle once again last week as they demolished Inter 3-0 last weekend and can also count having only lost once at home this term. Antonio Di Natale is flying up the scoring charts with 12 so far, and they will not show us any leniency.

Fiorentina played their usual game last weekend, and for 45 minutes things went swimmingly, save for being denied miraculously time and time again by an excellent keeper. The defense seemed mesmerized and confused as they fell into disarray from a series of counter attacks, something that Udinese has always excelled in. Fiorentina also lost midfield hard man David Pizarro to a knee knock who is set to be switched out with Giulio Migliaccio. In Udine, Fiorentina and the bianconeri are historically matched with 13 victories each and fourteen draws. Fiorentina last won here in 2009 while Udinese last took the spoils in 2011.

Montella welcomes back Gonzalo Rodriguez this week alongside Savic and Roncaglia as Neto once again takes his place in goal. Migliaccio fills in for the injured Pizarro with Aquilani, Cuadrado, Pasqual, and Borja Valero while Ljajic and Toni are waiting for a gametime decision on who starts next to Jovetic.

Udinese show up with Brkic in goal covered by Domizzi, Danilo, and Heurtaux while Pasquale, Lazzari, Pinzi, Pereyra, and Basta cover Di Natale and Muriel.

One of the keys to the match is avoiding the counter attack. Udinese will allow Fiorentina to fall in deep before taking the ball and slicing through the defense. Their defensive line is typically high while they are also big opportunists on set pieces. Fiorentina need to show flair and creativity in front of goal and not waste time in trying to beat the keeper. Today's match will be a strong indication if the viola can truly show continuity.