Share All sharing options for: Napoli 2-1 Fiorentina; Tonight In Jungleland 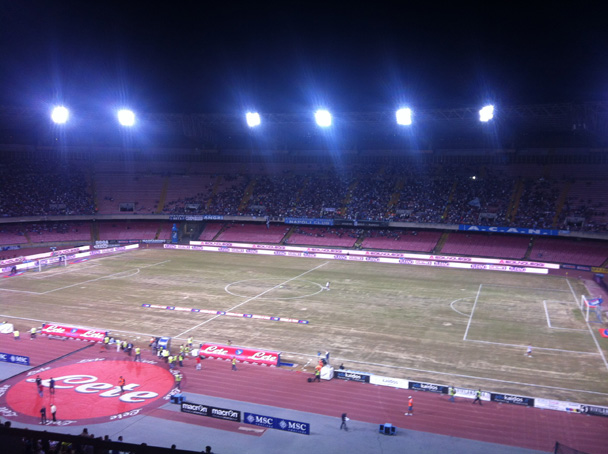 Welcome to Italy: Land of crumbling stadiums and dirt fields.

Even with a pitch that resembled a vacant lot, and missing Alberto Aquilani, Fiorentina's brand new precision style of Calcio went into Stadio San Paolo against a squad touted to be in contention for the Scudetto and dominated Napoli for 60 minutes.

The furrowed dirt took away the short, on-the-ground passing game and Firoentina was forced to pass through the air, but even still it was only after an own goal off a set piece from a questionable call put Napoli into the lead that the offense stumbled, allowing Napoli to press forward and score a second goal, from another set piece, by Blerim Dzemaili. Fiorentina got one goal back from Stevan Jovetic and Napoli won 2-1.

There were a lot of question marks for Fiorentina coming into this match, coming off a 2-1 victory over Udinese, as last minute transfer madness saw starter and defensive rock Matija Nastasic leave the squad and the turmoil of a failed transfer for Dimitar Berbatov also had left fans wondering what was going on in Viola land.

Recap
Of the very new players, only Tomovic saw the field in this match, lining up in Nastasic's Left Back spot and really did the job well, as Edison Cavani had absolutely no impact on the match, what so ever. Next to Tomovic, in front of Emiliano Viviano, was Gonzalo Rodriguez and Facundo Roncaglia, now fixtures in Vincenzo Montella's 3-5-2 formation.

Manuel Pasqual, wearing the Captain's armband again lined up in his usual spot, next to Borja Velero, David Pizzaro, Romulo, in for Aquilani, and, starting for the first time, Juan Cuadrado.

Jovetic and Mounir El Hamdaoui, also starting for the first time, played the tip of the formation.

Last season's 5th place finishers, Napoli, coming off a 3-0 drubbing of Palermo on the road, were making their first appearance at home. They, also in a 3-5-2 formation, fielded a star studded lineup with Italian International goalie Morgan De Sanctis behind Miguel Britos, Paolo Cannavaro and Hugo Armando Campagnaro. In the midfield were Juan Zuniga, Dzemaili, Marek Hamsik, and former Viola players Valon Behrami and Christian Maggio.

In attack for Napoli were new young stud Lorenzo Insigne and legitimate candidate for the Ballon d'Or, Edison Cavani.

It took nine minutes of back and forth sparring before Fiorentina began to impose themselves upon Napoli, but over the next 6 minutes, Fiorentina got off 4 shots, 2 from Valero that were block, another blocked effort from El Hamdaoui and the only shot Fiorentina got on goal for the half, a left footed shot from outside the box by Manuel Pasqual that De Sanctis saved.

Fiorentina got off 5 more shots in the first half, although none were on goal. it wasn't until the 33rd minute that Napoli got off their only shot of the half, a header by Cannavaro that drifted wide.

Second half was much of the same, with a 50 minute shot by Jovetic blocked on the way in. Then came the call on Cuadrado, where it appeared he had won the ball, but was called for a foul in his own end, perhaps with the body. The set piece cross was knocked into the goal by Valero's head, as he vied with Hamsik for the ball.

The goal seemed to light up Napoli and deflate Fiorentina as the next three shots were from Napoli, with the third shot being Dzemaili's goal.

Oddly enough, the second goal seemed to reignite Fiorentina and they came back with the next 5 shots, with Jovetic finally scoring, but it wasn't enough and the game ended 2-1.

Fiorentina out shot Napoli 16 to 5, but only 3 of those shots were on goal to Napoli's 1. De Sanctis has 2 saves to 0 for Viviano. Fiorentina wound up with 55% of possession and had 9 corner kicks to 7 for the home squad.

Report Cards
Viviano(5.5) - was basically a spectator in the first half with only 1 shot from Napoli, none on. Nothing he could do on the first goal, but he was caught flat footed on the second. The pitch probably didn't help him. Need a bit more from here.
Roncaglia(6.5) - had a few rash tackles, but shut down his side for most of the match.
Rodriguez(6) - had a few shaky moments, but for the most part, shut down one of the most prolific offenses in the league. The entire back line needs to tighten up their set piece defense.
Tomovic(6.5) - Shut down a tough man in Cavani. gave up a few corners a bit easily for my taste, but pretty good for a debut.
Cuadrado(6) - Man of the match in the first half. he got a bit tentative in the second. had a few rash tackles, including the foul on the first goal, which, in my opinion was a lousy call. gave up a yellow card and has his share of bad passes.
Romulo(5.5) - lots of running in the first half, had problems with the pitch. lost something in the second half. moved over to play Pasqual's spot and then was subbed late for Seferovic. Seferovic(NA) only got in 5 minutes, wasn't a factor.
Pizzaro(5.5) - looked a bit put off by the pitch and seemed a bit tired at times. tried to hold onto the ball for too long every so often. will get better
Valero(6.5) - still the flower of the midfield. even when Napoli began to press, he was the one Viola who pressed back.
Paqual(5.5) - Played back to help out with Cavani most of the match. Took a shot to the kidneys, (with no card or even a call) and it seemed to hamper him the rest of the match until he was subbed for Fernandez. Fernandez(NA) - had a few runs but did not have enough time to make a contribution.
El Hamdaoui(6) - The pitch seemed to have a big effect on him as well. had one shot just barely over the crossbar. got tired late and was subbed for Ljajic. Ljajic (5.5) didn't have a lot of time to get in the match and seemed lost most of the time. Took a free kick, hit it straight into the wall. A few corner kicks were ok.
Jovetic(6.5) - Had problems with the pitch but was the best out there. Great shot made it close at the end.

Montella(6) - Even with the bad result, the team dominated another front runner for long stretches of the match. Give them time to gel and get in shape and this team can do wonders.

Quotes
Mazzarri:
“The pitch was shocking, especially for Serie A. We have to do something about this and I don’t know whose responsibility it is.

“Not only was it ugly, but it was also dangerous for the players who could hurt themselves on that surface. I hope someone will work to make the field suitable for the top flight.

“As for the game, I want to compliment Fiorentina, as they started stronger and we were a little held back in the beginning. They were better in the first half, holding possession and deserved more.

“I did not like our performance, mainly thanks to the efforts of Fiorentina, who can be a real surprise this season.

“In the second half Gokhan Inler was very sharp and gave our play more organisation. We deserved to win for the way we played after the break, but I think today we only played for 45 minutes.

“In fact, I didn’t like the end of the match either, as we went too deep.”

Looking Ahead
The first International Break of the season is here and several Viola players will go off on International duty. Those that remain will play a friendly on Friday in Florence against Walter Zenga's Al-Nasr Sports Club from Dubai.

Serie A play will resume at the Franchi on Sunday, September 16, with Catania coming to town. Catania is in 6th place with 4 pts, having tied at Roma and beating Genoa.