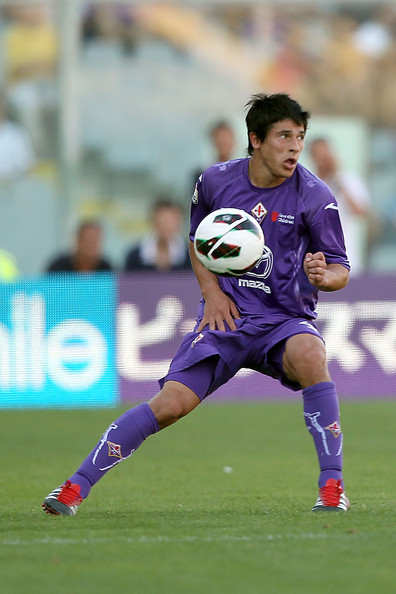 The Legend of Facundo Roncaglia continues to grow as he scores his first goal, a screamer from way outside the box.

Fiorentina had a chance for a win and three points today, but waste Facundo Roncaglia's first goal and a fine save from Emiliano Viviano on a penalty kick as Luca Toni handles a ball in the area and give up a second penalty to ten-man Parma which Jamie Valdes makes no mistake on. Stevan Jovetic had the perfect opportunity to put the game away but served up a weak penalty of his own that was easily blocked by Parma Goalie Antonio Mirante.

Fiorentina started out strongly enough, with the usual possession game that Viola fans have grown used to, but faded in the second half, as former Viola Massimo Gobbi and his Gialloblu took the match to Fiorentina and La Viola seemed to choose to sit back and defend, rather than control the ball, which has worked so well for them.

The game was marred by continual questionable calls by Paolo Valeri and his officiating team. Valeri called 35 fouls, gave out 7 yellow cards, 1 red card, and granted three penalty kicks, although all but the first penalty were fairly straight forward (Ed note: Replays show all penalties as correct). There were some questionable non calls and offside called as well. Way too much participation from the officials. Fiorentina do not have a good history with this man, having zero wins, 6 draws and 1 loss.

Recap
Fiorentina fielded a slightly different lineup today, most likely because of the quick turnaround before the midweek games. The defense in front of Viviano was the usual triad of Roncaglia, Gonzalo Rodriguez and Nenad Tomovic.

Coach Vincenzo Montella switched up the midfield, however, starting Juan Cuadrado and Matias Fernandez on the right side, with the now normal duo of David Pizarro and Borja Valero next to them. Mattia Cassani started on the left side in place of Manuel Pasqual, likely to keep him fresh for Juve. Haris Seferovic got his first start next to Jovetic as well.

Well-traveled manager Roberto Donadoni has had a bit of a schizophrenic season so far with Parma, winning at home against Chievo 2-0, while losing both away matches, a 2-0 loss at Juventus and a 3-1 loss at Napoli. He fielded a 3-5-2, like Fiorentina, with Alessandro Lucarelli, Yohan Benalouane and Gabriel Paletta ahead of Mirante.

Lined up in the midfield were Daniele Galloppa, Jamie Valdes, Marco Parolo, Massimo Gobbi and Aleandro Rosi, with Ishak Belfodil and Dorlan Pabon up front.

The match started out fairly evenly, as both squad started to feel each out, but Fiorentina began to take control and assumed the bulk of possession, but never really had a chance until the 20th minute, when Roncaglia got the ball from Valero and blasted it home for a long distance.

Cassani and Jovetic each had shots but neither were on target and Parma struck back, with Lucarelli getting a header off from th3 middle of the box that struck the goal post right before the 30th minute.

Benodil got off a wide shot but the Fior came back and hit the woodwork as Roncaglia just missed his second goal from the middle of the box 4 minutes later. The half ended 1-0 in favor of La Viola.

The second half started out fine enough for Fiorentina, as Seferovic won a free kick deep in the Parma zone, but Fernandez shot it just wide.

Parma came back and started to assert themselves after that threat. They won a corner off of Cuadrado, but Benalouane sent the header wide. 2 minutes later Valdes missed a shot to the left and Benalouane missed another, but the warning signs were clear to see.

A minute later, Dorlan Pabon drew a penalty on Roncaglia, although there was a question as to the validity of the call.
Valdes stepped up to the spot to take the kick, but, after a slow, stuttering run up, he dribbled a shot to the corner that Viviano easily corralled.

Parma continued to press, so Montella made the first substitution of the match, bringing in Romulo for Fernandez. Valero got off a shot but Mirante made the save.

Right before the 70 minute mark, Seferovic, with some nice passing with jovetic earned another free kick deep in the Parma zone. Montella sent in Luca Toni to replace the young Swiss striker, however.

Jovetic took the free kick, but blasted it into the wall. It was only a preview to the disappointment that would follow. Jovetic went on to miss three more shots wide over the next 15 minutes before Cassani won the penalty kick and a red card three minutes before stoppage time.

Jovetic stepped up and sent a weak shot right down the middle that Mirante got a leg to, saving the match for Parma.

Even a man down, Parma seemed energized and took it right at Fiorentina, with former Viola Amauri getting a header on goal that Viviano had to tip away. The ball landed right in front of the goal, but was swept away by a Viola defender.
it wouldn't matter however, as Luca Toni then handled a ball and Valdes stepped up and did not make a mistake to even the match and steal the point from Fiorentina.

Report Cards
Viviano(7) - Emiliano today showed why we were excited to get him. With a PK save and another fingertip save on Amauri late. It was a bit too much to expect a second PK save. Only needed for 2 saves on the day.
Roncaglia(7.5) - Awesome first goal, bit too eager on the first penalty called, although on that play it really looked to me as if the Parma player was going down before Facundo even touched him. Solid on D the rest of the match
Rodriguez(6) - Played his usual solid match, although he seemed back on his heels, along with the rest of the squad, at the end.
Tomovic(6) - held his side firmly, Parma rarely attacked from that side. Cassani helped out there as well.
Cuadrado(6.5) - owned the ball fearlessly, seemed to be fouled over and over without getting the call. Still have issues with his passing and choices but all in all a good match. A bit of a liability on defense later on in the match, however
Fernandez(6.5) - Great taker of corner kicks and paired up well with Cuadrado. With those two the right side becomes a slashing, attacking side. However, it also left the door open for Gobbi and Parma to attack from that side. Subbed after an hour. Romulo(6) came in with great energy and had several drives down the side, but the rest of the team had packed it back by then and most of his efforts were wasted.
Pizarro(7) - Still the midfield general, owned the ball for an hour, but then packed it back with the rest of the squad. Got a yellow card for a tackle from behind. perhaps a bit harsh, but that's Valeri for you.
Valero(7) - Got an assist on Roncaglia's goal. He, along with the rest of the squad, disappeared late, but that would be the only downside.
Cassani(6) - Earned the penalty that Jovetic missed, helped out Tomovic on defense, but really didn't seem to contribute to the possession game very much. Should see Pasqual back for Tuesday
Seferovic(5.5) - took him a long time to get settled, was virtually invisible until just before the half. during the first part of the second half he earned a few free kicks with nice plays and had some interaction with Jovetic. Subbed out minute 68; Toni(5) came in with 20 minutes left, looked tired after 10 minutes and gave up the handball. Not all his fault, as defending isn't what he's in for, but there it is.
Jovetic(5) - missed a penalty, every shot he took was wide left or right. Didn't connect with anyone really, was out there on an island. Hopefully it was just distraction and he'll come back strong next week.

Montella(5.5) - Put out a competitive squad, at least early on, but failed to keep the team playing the possession game. His subs made the squad even more defensive. However a point on the road is never a bad result and if he can get points from Juve, all will be forgotten. A bad loss Tuesday, however, and these two lost points will be missed strongly.

“I certainly have to analyze the game in its entirety. In the first half we played comfortably and passed the ball around well. Perhaps we could’ve done better with a few of those chances. After the break we suffered the initiative of our opponents and gave them the confidence to fight back. It’s a shame we didn’t make more of our opportunities when we were in control, as a mature team would’ve done that. We made some mistakes and must work to ensure we don’t repeat them. Perhaps we thought that the result was already under lock and key and didn’t maintain the same level of determination. At least these are experiences that help the team to grow, so I see the glass half-full. We need to work harder and become more confident of our abilities.”

Yellow Card Situation
Disqualification of one game after the 4th, 8th, 12th, 15th and the 17th yellow card.
Past 17, every yellow card is equivalent to a one-match ban.

Looking Ahead
Juventus comes to town Tuesday. The Franchi will be sold out and Brett will be there to deliver our mojo first hand. The Viola will have to play better than they did today, but a tie isn't out of the question against this team. A win might be a lot to ask for, however.