Breaking In The Season: Napoli-Fiorentina

Share All sharing options for: Breaking In The Season: Napoli-Fiorentina 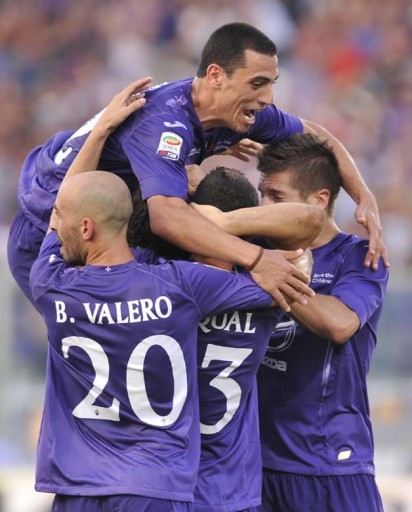 Fiorentina's lightening start to the season continues as the boys take a tricky trip to the San Paolo in Naples to face a scudetto contending Napoli.

So the week ends in a series of ups and downs. Much admired defender went to Manchester to hang out with the Gallagher's, and Fiorentina celebrated a host of new players and the return of a much loved figure. This weekend, Fiorentina head down to face four former ghosts of the past, and a Neopolitan side spearheaded by a feisty Uruguayan. After last weeks 2-1 comeback victory over Udinese, spirits are running high in the viola camp, and organization and strategy have made a welcome return in the viola ranks. After getting settled down last week, El Hamdaoui looks to make his first start next to JoJo and the midfield, much heralded for it's technical quality, should have a more comprehensive and settled down feel to it.

Napoli started off their season with a 3-0 drubbing over Palermo and Cavani already looks to be in fine form. They suffered the loss of Lavezzi to P$G this summer but managed to hold on to Hamsik and also add the hero to villianous Behrami to their midfield. Behrami left Fiorentina over the summer after being left out joining Switzerland's Olympic Team (Who finished last in their group and didn't make it past the first round). Napoli also added former captain Alessandro Gamberini who joins former teammate Marco Donadel as well as former viola Christian Maggio.

Montella looks set to start El Ham alongside JoJo while Aquilani will once again start from the bench. Pasqual will start over Cuadrado on the left with Borja and Pizarro in the middle and Cassani covering the other side. Roncaglia, Gonzalo, and new boy Tomovic will hold the fort in front of Viviano.

Mazzari's men start with De Sanctis in goal, held by Campagnaro, Britos, and Maggio, while Zuniga, Dzemaili, Behrami, and Maggio cover Hamsik behind Cavani and Insigne. Donadel and Gamberini will start from the bench while Pandev and Dossena are still suspended from the Supercoppa incident.

Montella is choosing to go with a more offensive route like he did against Udinese, starting the defense high on the field, but should things get rough he now has a DM in Migliaccio to give extra weight to the midfield. Cuadrado should make an appearance in the second half as should Aquilani or Fernandez. Montella has enough depth and talent to switch around the formation as he likes. Toni didn't get his paperwork to file in time to make the bench, and Savic is still waiting on a work permit which should arrive this week. Della Rocca picked up a slight knock this week and won't be with the team.

The conditions of the turf are said to be in a poor condition so we might have to muscle our way through the game instead of the gentle passing we saw against Udinese. It is rumored that ADV himself is flying down to the game as well as Daniele Prade.