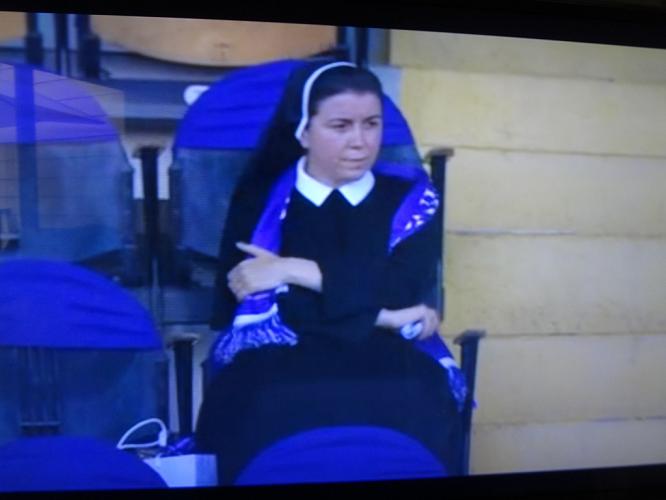 A Fiorentina team still learning each other and trying to find a way to gel, with a large portion of the team being away on International Duty for the past week and a half, still managed to own possession, dominate a scrappy Catania squad which were committed to defending their goal and scored 2 heavenly goals to win for the second straight match at home.

Viola Talisman Stevan Jovetic authored both the miracles, scoring a sublime goal, seemingly out of thin air and setting up Luca Toni’s first official goal in his return to Firenze. The Jovetic goal, his fourth in three matches, puts him on top of the League goal scoring list and continues his goal-scoring string, having scored in all three matches he’s played.

Recap
Sixth place Catania came into the Franchi undefeated this season with a draw at Roma and a win over Genoa at home. New coach Rolando Maran put out a 4-3-3 formation with Mariano Andújar in goal. Nicolás Spolli, Nicola Legrottaglie, Giovanni Marchese and Pablo Alvarez defending him. Former Viola Sergio Almiron lined up to the left of the midfield with Francesco Lodi and Marco Biagianti beside him. Gonzalo Bergessio, Alejandro Gómez and Pablo Barrientos were up front.

Former Catania manager Vincenzo Montella brought his tenth place Viola into the match after a loss at Napoli. Despite owning most of the possession on a dirt field, the squad had failed at set pieces and allowed the loss. He put his men out in his now standard 3-5-2 in front of Emiliano Viviano. Facundo Roncaglia, Gonzalo Rodriguez and new comer Nenad Tomovic playing in just his second match after the defection of Matija Nastasic to the Manchester City back up squad.

Juan Cuadrado got his second start next to Giulio Migliaccio, in for an injured Alberto Aquilani. David Pizarro was in the center of the formation with Borja Valero and Captain Manuel Pasqual out to his left. Adem Ljajic was in for injured Mounir El Hamdaoui, who has a sore knee, next to Jovetic.

The match started out much the same way the previous two had for Fiorentina, with La Viola asserting themselves, controlling the ball and moving steadily forward. This attitude was helped by Catania's game plan as they packed their squad back and committed to defending. This match however, perhaps because of the lay off, passes were a bit off target, control a bit disjointed and the squad just looked a bit uneasy.

They still managed to get some chances however. Jovetic got off a shot which missed the net, Migliaccio made a weak shot from outside the box that Andujar easily saved and Jovetic ha another shot requiring a save.

Adem Ljajic went down just outside the box in the 19th minute, but was issued a yellow card from ref Daniele Doveri for diving, which was really questionable and ironic, given that Catania had been diving and going down easily for most of the match. Notably, Gomez, diving to ground, clutching his chest, when any contact, if there was any, was down near his feet.

Jovetic, Valero and Cuadrado all had shots after that, but none were on the frame.

In the 39th minute, Gomez and Pizarro had a scuffle over a free kick and Doveri started waving his yellow card arounda gain, giving each man a yellow card.

It looked as if the half was going to end scoreless when Jovetic gave the ball to Ljajic, who drove it into the side of the box. The defender managed to get back and cut off Adem, but somehow he managed to dig the ball out, keep control and serve it back to Jovetic, who spun and drilled it under a defenders leg and past the goalie for the lone goal of the half.

The half ended with 62% possession, 7 Viola shots to none, 3 of them on goal and 4 corners to Catania's zero.

The second half started with Catania coming out of their shell as they looked to even out the match. The first shot of the half was from Barrientos who sent it wide.

Fiorentina would have none of that as they settled down, took possession back and got off the next three shots, a missed Migliaccio header, a shot that Valero scuffed high and wide and a beautiful give and go with Jovetic and Ljajic that required a sprawling, frantic dive by the goalie. The Ljajic shot need a defender to put it out over teh end line as it almost trickled in anyways.

Gomez came back with a long range shot at the one hour mark, but it was right at Viviano and an easy save.

A few minutes later, Adem Ljajic was brought off the field and Luca Toni made his first official appearance for his old squad. It didn't take long for him to make impact either. Juan Cuadrado served a ball from midfield to Jovetic who gave an easy pass to a wide open Toni who made no mistake and sealed the deal for Fiorentina.

Catania tried to get back into the match, a header from Bergessio was just tipped over the crossbar and Viviano save a shot from Gómez.

Luca Toni had a chance with a header that went wide and another chance on a rebound from a Jovetic shot, but the goalie made a double save to preserve the score at 2-0. Jovetic got a late yellow card, his second of the young season.

Fiorentina had 59% possession, out shot Catania 15 to 8, with 7 of those on goal to Catania's 4. The result puts them in 5th place with 6 points, depending on the outcome of the afternoon match. Even then they can finish no worse than 6th place. Not a bad start.

Report Cards
Viviano(6) - His first clean sheet in purple. looks a lot for comfortable in goal. one fabulous save, tipping a ball over the bar.
Roncaglia(7) - Shut down his side as always. had a few excellent tackles, on one, he took away the ball, saved it along the sideline and started a rush forward. Another play he took the ball all the way into the Catania zone and was tripped, although Doveri didn't see fit to give Fior the free kick.
Rodriguez(6) - Sold and dependable. no mistakes.
Tomovic(7) - One sweeping tackle saved a goal, on another play he ran back on a counter, caught up with the attacker and took away the ball. Good job by Prade to find him.
Cuadrado(6.5) - I'm conflicted about Juan. On one hand he is a monster on the ball and always a threat to go around, or through, his defender, but his passing and finishing is often very poor and several times leaves the team open to counters. That being said, he served the ball to jovetic for Luca Toni's goal, so good job. Subbed late for Matigol; Fernandez(NA) - not enough time to make an impression.
Migliaccio(6) - Had a chance at his first goal, but missed the header wide. Looked like he was still finding his way for long stretches of the match, but he's a worthy sub for Aquilani.
Pizarro(7.5) - Just an absolute beast on the ball. If not for Jojo's heroics, he'd be the man of the match. Owned the ball all match, always making the right pass or spinning out of tackles. He's the kind of general this team has been lacking for years.
Valero(6) - Not as strong in possession as he's been the first two matches, especially in the first half, but was better in the second. Scuffed a shot badly, but that's not really his role.
Pasqual(6) - The short passing game fits his style much more than the previous administrations. he's not called on for long crosses. he gets taken off the ball a bit too easy for my taste, however. Subbed for Cassani late.; Cassani(NA) - Not enough time to make an impression. He played on the left side however, so that shows some versatility.
Ljajic(6) - Had a very unproductive first half, but the assist on the first goal made up for all that. SEcond half played much better, nearly getting a goal himself. Subbed for Toni; Toni(6.5) - Any one of us here could've scored the goal he scored, but it was nice to get him going so quickly after entering the game. missed a header late and almost got his second as he leaped onto a Jovetic rebound. He could be a great sub to bring on when you need a late goal, but I'm not sure he's got a whole 90 minutes in him.
Jovetic(7.5) - Looked a bit ragged in the early going, but his goal was amazing and he showed great partnership with Ljajic in the second half. He's the man...

Montella(7) - Team was a bit ragged and rusty in the first half, but still dominated play. Every sub he brought in either contributed or didn't detract from the squad. Great so far, but need to keep it going with the tough teams coming up soon.

Quotes
Vincenzo Montella: “It was a fantastic performance. Stevan Jovetic is not a surprise anymore and I knew Luca Toni could achieve great things too. The fans have every right to dream, but we do not. We’ve got to keep our feet on the ground.”

Rolando Maran: “We lacked consistency and precision, as we could’ve created more dangerous opportunities. We did use up a lot of energy and it was difficult to fight back.”

Yellow Card Situation
Disqualification of one game after the 4th, 8th, 12th, 15th and the 17th yellow card.
Once this threshold every yellow card shall be equivalent to a one-match ban.

Looking Ahead
La Viola travel to Stadio Ennio Tardini in Parma in search of their first road points. Parma have won their only home match, a 2-0 win over Chievo, while losing both their away matches, 2-0 to Juve and 3-1 at Napoli. If Fiorentina want to continue in the top of the table, these are the kind of matches they’re going to have to win.