Share All sharing options for: Back On Track: Fiorentina-Catania 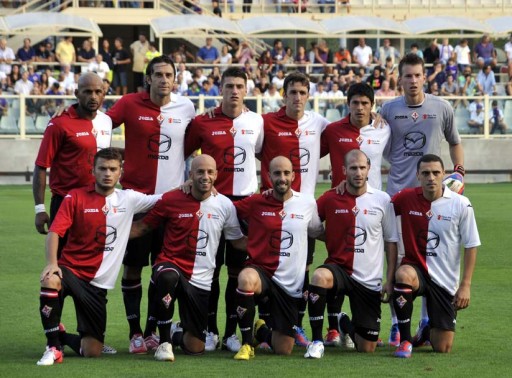 After a slight stumble in an ugly Naples two weeks ago, Fiorentina return from the international break looking to redeem themselves against a determined Sicilian side.

Fiorentina were disadvantaged in Naples. A still building team, playing on what was basically a dirt and sand pitch, and two set piece goals to drive the viola to a 2-1 loss. The week that followed had many purple people spread through the globe, from Chile to Morocco. The ones who remained have been subjected to a tough training regime, followed by a morale boosting win over Al Nasr that saw Luca Toni at the forefront with just as much drive and passion to succeed as the rest of the team. Despite losing El Ham, Aquilani, and Della Rocca to the short term, Fiorentina look charged this week to take the 3 points against Catania.

Catania aren't a team to be reckoned with. They gave Roma a hard time on opening day with a 2-2 draw and took the three points against Genoa in a thrilling 3-2 win. Led by the much desired Papu Gomez, Catania look to impress former boss Montella and make the viola work for their points.

With El Ham nursing a knee knock, the question was, who to start next to JoJo? It would be preferable to have a tall man like Toni for crossing, but it's still unsure if he can last an entire match at his age, so Ljajic looks to be getting the start. Montella is going back to his 3-5-2 with Viviano in goal held with Roncaglia, Gonzo, and Tomovic, with a nicely Offense/Defense minded midfield of Pasqual, Valero, Migliaccio, Pizarro, and Cuadrado covering JoJo and Ljajic.

New Catania coach Maran is set to field a classic 4-3-3 with Andujar in goal covered by Alvarez, Legrottaglie, Bellusci and Marchese, while Lodi, Biagianti, and Almiron support Barrientos, Bergessio, and Gomez.

Fiorentina are taking a offensive approach to the game but the addition of Migliaccio gives some break to the play and takes the workload off the defense. It'll be up to Viviano to step up his play today and show that he has his much talked about talent. Expect Toni in the last half hour, if not to please the fans, who look to be coming out in a decent 24,000 today and also an appearance from ex Catania man Llama.