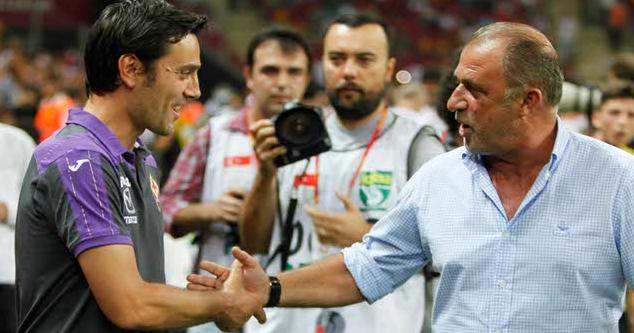 La Viola took a trip to Istanbul today for a friendly against Turkish league giants Galatasaray, but instead of Turkish delight on a moonlit night, they suffered a loss and an injury to starting goalie Emiliano Viviano.

The first half was all Galatasaray, but La Viola's defense held firm for the first half. It wasn't until the second half when Viviano reached down awkwardly and missed the ball, and started waving to the sidelines before crumpling to the ground in pain. Thoughts went quickly to his left knee, which he injured and had surgically repaired last season, but initial reports suggest a muscle injury, rather than knee damage.

Early reports says he could be out for 2 to 7 weeks, which means returned alumni Cristiano Lupatelli might start the season in goal.

After the scare, Fiorentina stormed back and put the pressure on Cim Bom, which is what the natives call Galatasaray. Stevan Jovetic hit a crossbar and Fior had several corners, but were unable to break through former Lazio goalkeeper, Fernando Muslera, who has given up the Roman Hills for the city that straddles the Bosphorus.

Video of the match wasn't available in the US, so I'm having to base my review on other reports, but by all accounts, Juan Manuel Vargas had a horrible match and was replaced at the half by Pasqual. Also leaving a lot to be desired was Olivera, while, reportedly, newcomers Facunda Roncaglio, Borja Valero and Alberto Aquilani had fine games and show a lot of promise.

Late in the match, Adem Ljajic was subbed in for Mounir El Hamdaoui and had several good interactions with Jovetic, one being a corner that Jovetic headed and Muslera deflected off the crossbar. The ball dropped perfectly for Roncaglio, but he headed it high over the bar,

Ljajic had another shot at an equalizer after a fine give and go with Jovetic, but shot it wide.

Looking Ahead
Fior travel to newly promoted to Serie D Tuscan neighbors USD Fiesole Caldine on Saturday, 1800 local time, followed by another short trip to Viareggio on Wednesday, also at 1800 local time, to play FC Esperia Viareggio, who are in Lega Pro Prima Divisione A.

Then it will be August 25th and Udinese at the Franchi as we start to play for real.