Dimitar Berbatov - U + UR Hand

Share All sharing options for: Dimitar Berbatov - U + UR Hand 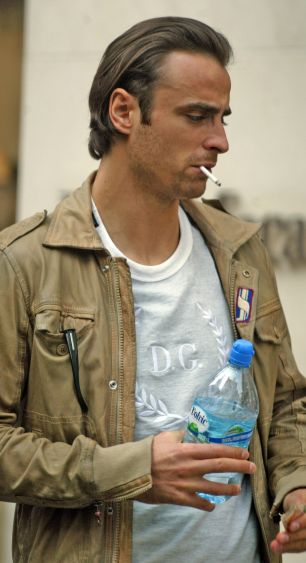 Dimitar Berbatov, on the way to Florence, with Technical Director Eduardo Macia at the airport waiting for him, changed his mind and decided Florence wasn't good enough for him.

While on a lay over in Munich, the player received texts or phone calls that made him change his mind and he neveer showed up.

"ACF Fiorentina announce that the transfer for Dimitar Berbatov definitively collapsed after an agreement with Manchester United had been concluded (with shared exchange of contracts, the first instalment paid and the financial guarantees for the second instalment ratified) and after reaching a verbal agreement with the player over his contract.

“During today the English club had allowed their player the written permission to come to Florence for a medical and to sign his contract.

“The player got on the flight with his agent and on tickets paid for by Fiorentina. He never arrived in Florence.

“This was down to outlandish and arrogant behaviour of other clubs, who have nothing to do with fair play and sporting ethics that go even beyond the confines of fairness.

“As for the player, apart from his characteristics and his value on the field, at this stage we are happy he didn’t come to Fiorentina. He did not deserve our city, to wear our jersey or the values that represent it.”

Fat, lying Juventus director general Beppe Marotta, would have everyone believe that Berbatov had already changed his mind and that Fullham had scuppered the deal:

“We only approached Manchester United and got close to the player after discovering he had turned down Fiorentina. There was an offer from Fulham, but he wanted to evaluate our proposal too and give a definitive response tonight.

“He wants to stay in the Premier League. Why was he in Munich? His wife is from there.”

Whatever the real story, its clear that Berbatov is an idiot of the highest degree and clearly doesn't deserve to wear the Viola. Reports have him back in England having a physical with Fullham.

To add to the distress, is the apparent transfer of Matija Nastasic to Manchester City, which only lacks an official announcement as the player has gone for a physical. There are reports that Montenegran and former Partizan player Stefan Savić will be coming from Man City to fill the gap, but that has yet to be official.

We still have the rest of today and most of tomorrow left in the transfer market and rumors are abounding as to what Fiorentina will do.

Reportedly Nicklas Bendtner is very close to signing with Juvemerde, so he's no longer in the picture.

Other rumors say that Fior is still trying to get Marco Borriello from AS Roma or Marouane Chamakh from Arsenal on loan. Both those players have high salaries, but the reported transfer of Juan Mauel Vargas to Genoa frees up nearly 2 and a half million Euros in salary which could help pay one of those guys. Ryan Babel is still considered a possibility as well.

Rumors have it that Fior are considering Central Defender Angelo Ogbonna and Nac Breda player Nemanja Gudelj. Gudelj is listed as a midfielder, but, this season, has been playing as part of Nac Breda's 6 man defensive line, so I'm thinking he could be the Defensive Midfielder we've been looking for.

Time will tell. We have about 48 hours of madness left and then we can get down to business. Regardless of the last few days, fans should remember the fine work that Daniele Prade, along with Mr Macia, have done already and not let recent events tarnish the shiny new lineup we already have.