Share All sharing options for: Fiorentina: Your New Squad for 2012-2013 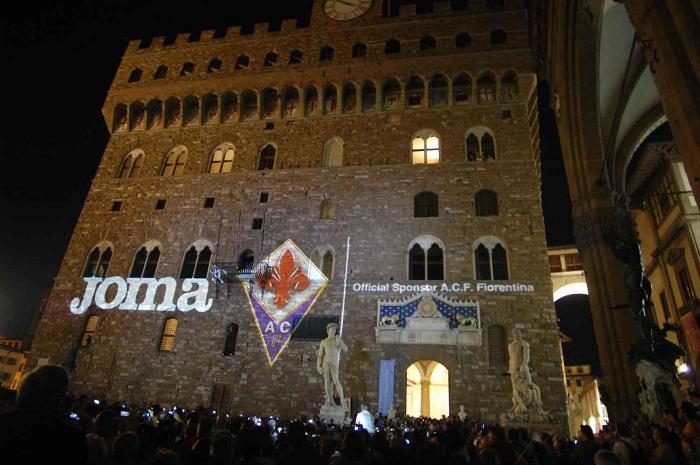 The Preseason started off with a bang as new sponsors, Joma, lit up Firenze with new jerseys and a light show...

The start of the Serie A season is just days away, as is the end of the transfer market. So, barring some late changes, it looks like our roster is mostly set and here it is. 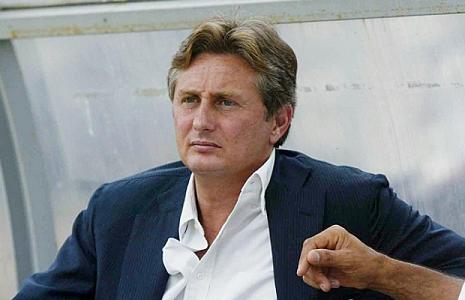 Daniele Prade was named as Sporting Director May 26th. The 45 year old was former AS Roma DS. During his AS Roma tenure, the squad won a Scudetto, 6 second places, 2 Coppa Italias and 2 Supercoppas. His first signing at Roma was coach Luciano Spalletti. Prior to his time at AS Roma, Prade managed Teramo, Frosinone and Ternana. 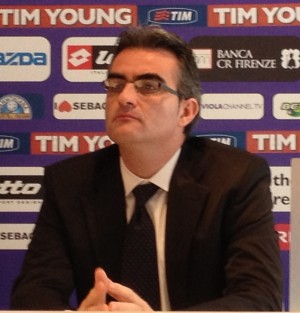 Eduardo Macía is a Spanish football Technical Director. A retired player, as a scout he has previously worked for Valencia CF and Liverpool F.C., in liaison with manager Rafael Benítez. On 28/04/2011 Olympiacos F.C. announced that Eduardo Macia had been appointed as their new Technical Director. On November 17 2011 become a talent scout of ACF Fiorentina, finally being promoted to Technical Director with the hiring of Prade. 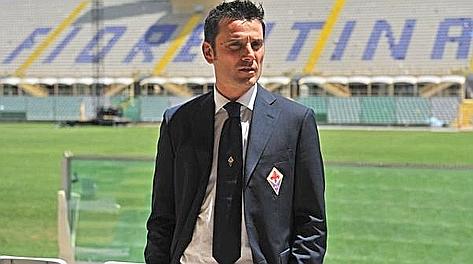 Vincenza Montella started his career on 21 February 2011 as he was appointed interim head coach of the first team for AS Roma for the remainder of the season, taking over the role from resigning boss Claudio Ranieri. On 23 February 2011 in his first game in Serie A, Roma won away beating Bologna 1-0. He completed a eventful season for AS Roma leading the Giallorossi to sixth place in the league table, and he was subsequently released after the new club owners led by U.S. businessman Thomas R. DiBenedetto decided to appoint Luis Enrique as permanent head coach for the 2011–12 season.

Montella went onto Catania, where he led the Rossazzurri to a mid-table placement, and ahead of Sicilian rivals Palermo for the first time in eight years; by the end of season, he was heavily linked with a comeback at Roma and the vacant job at Fiorentina. Montella left Catania by mutual consent on 4 June 2012, after only one season in charge of the team and took over La Viola on On 11 June 2012, signing a two year deal.

Montella has preferred a 4-3-3 formation throughout his career, but this preseason has seen him primarily put out a 3-5-2 lineup and that is what we expect to see come Saturday against Udinese and what I will lay out here 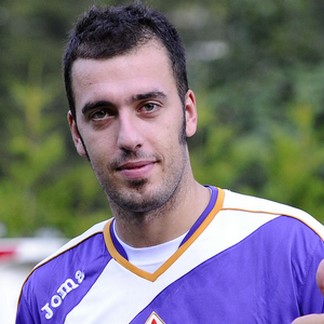 Viviano is a Florence local and a product of Fiorentina's youth system and a self-professed fan of the organization. his daughter is named Viola. His return to Fiorentina was a long, drawn out saga, with visits to Brescia, Cesena, Bologna, Inter and Palermo along the way. His co ownership deal between Palermo and Inter threatened his arrival, as Inter wanted restitution and blocked the deal, but Palermo was able to work out the kinks and Emiliano has been loaned for a year with Fiorentina having the right of redemption. he has 139 appearances in Serie B and 92 appearances in Serie A. 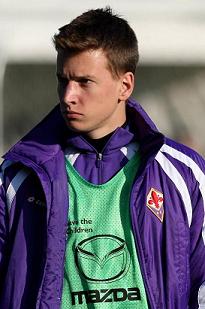 A young Brazilian product, he has had 3 Coppa Italia matches with Fiorentina, the latest being Wednesday, a 2--0 win over Novara. 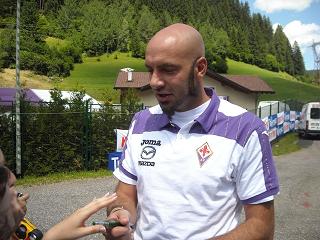 Lupatelli is 34 years old and widely traveled, this being his second stint with Fiorentina. He wore the Viola in 2004 to 2008 with 32 appearances. 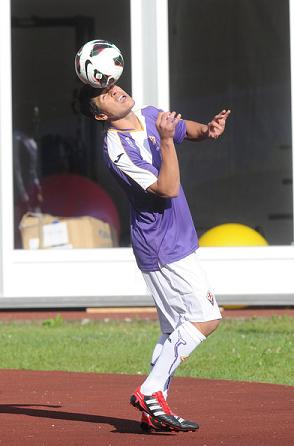 The new Right Back comes to us by way of Argentina and Boca Juniors. Facundo Roncaglia is a 25 year old that has already shown himself to be a bull in defense and should hold down his side for years to come. 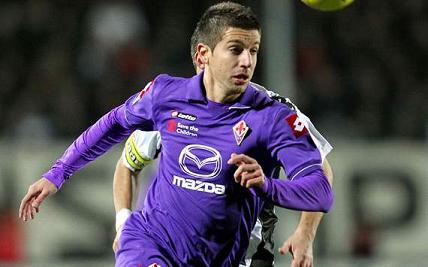 Nastasic, our 19 year old Central Defender is another year older and looks to only get better with time. EPL Champions Manchester City made a bid to steal him away, but were successfully deflected. Matija's contract is up in 2014, so he looks to get a very nice extension come next summer. 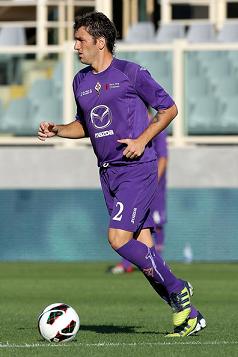 Another newcomer, Gonzalo Rodriguez, will hold down the left side of the defense. Rodriguez is Argentine, is 28 years old and comes to Fiorentina by way of Villareal. 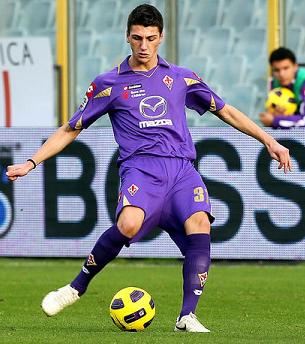 Camporese is only 20 years old and has had two major injuries, which have held back his progress a bit. He's had 16 appearances with the Senior squad and is a fixtures in Italy's youth system. Camporese can fill in at Center Back or either wing. 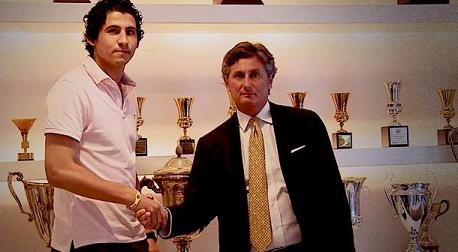 Hegazy is another newcomer, a 21 year old Egyptian National team member and is very tall, six foot four inches. He comes from Egyptian squad, Ismaily, is a bit raw and needs some experience before featuring in the big time, but should be an able substitute at Center Back. 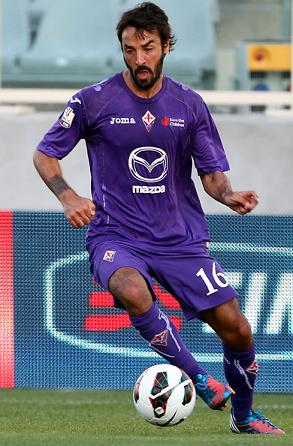 This offseason, Fiorentina purchased Cassani's contract from Palermo, so he's now Viola all the way(he was on loan last season). He will be back in the position he filled last year, playing on the far right of the Midfield in Montella's 3-5-2. he could drop to Right Back, should the formation change to a 4-3-3. 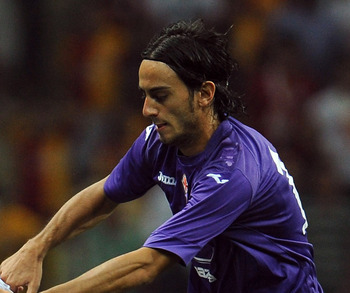 One of the biggest sensational purchases of the off season was bringing back Italian International Alberto Aquilani to the Peninsula from Liverpool. Aquilani had failed to make the Scouser lineup the last two years, winding up loaned to Juventus and Milan and is a huge upgrade from that Montolivo guy. His endurance is a bit of a question and he's been known to be injured frequently, but this is his chance to show his stuff and if he's healthy he'll be out there on a daily basis. he will play inside Cassani on the right side. 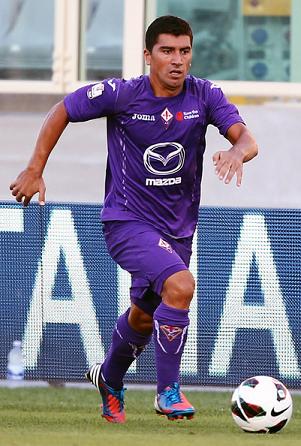 What could turn into another huge pickup for Prade is the midfield general Fiorentina fans have been begging for, and this season, that general is David Pizarro. Pizzaro has over 240 appearances with Serie A squads and will be the steady, stabilizing presence in the Viola midfield. Hes a bit old, being 32, but has been very durable through his career. with Aquilani and the other midfield purchases, he will be a big addition.

Another big pickup in the midfield, playing just to the left of Pizzaro, is Borja Valero. Valero comes to Italy from Spain. He came from Real Madrid's youth system, has played for West Brom, Mallorca and Villareal. he is great in possession and passes well. Combined with the other new midfielders, he provides a rock on the left side of the midfield and should provide an outlet for Pizzaro to aid in ball possesion. 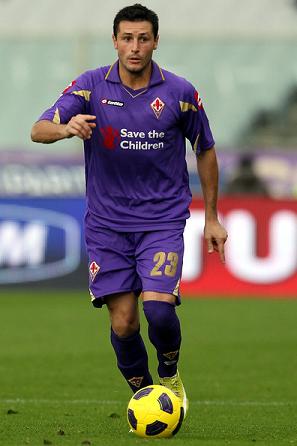 Filling out the midfield on the far left is senior squad member Manuel Pasqual. Pasqual has been with the squad since 2005 and has 168 appearances. The addition of all the other midfielders has freed Pasqual to forage forward and serve a lot of crosses. Valero gives him support in back when he goes forward, making La Viola a lot less susceptible to the counter. 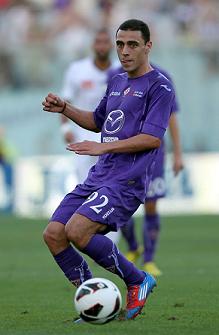 Romulo, originally brought in from Cruzeiro as a Right Back, then moved to a Right Forward by Sinisa Mihajlovic, has been resurrected by Montella as a midfielder and looks to back up Aquilani and Valero. 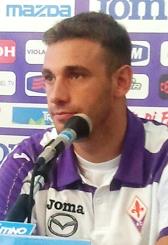 Another newcomer who came over from Palermo with Viviano, hes a 24 year old attacking Central Midfielder and looks to backup Pizzaro. He had 21 appearances with the Rosanero last season. 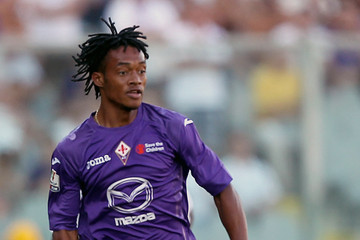 Columbian National newcomer Juan Cuadrado has come to the squad and looks to backup Cassani this season. he can also play right back as well, if necessary. Cuadrado has played with Udinese and was at Lecce last season on loan. He is a beast on the ball and looks to attack at all times. His passing, at times, can be a bit ragged. 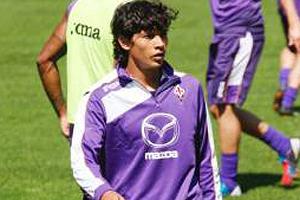 Matias Fernandez is a 26 year old Chilean who comes to Fiorentina via Sporting Lisbon and is another slashing, attacking outside midfielder. He looks, at least at the start of the season, to be Pasqual's backup, but might eventually wind up the starter, given his age and work rate. 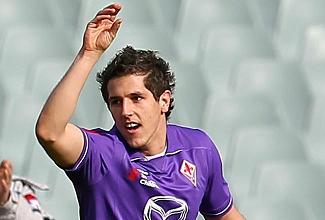 Despite all media attempts and various club attempts to pry him away from La Viola, Stevan Jovetic returns to Firenze for another season in purple. Being the second year after a complete knee reconstruction, this season is a make or break year for him. If he's going to have a complete recovery, this will be the year to show it and given the squad built around him, this could be a huge year for Jojo. 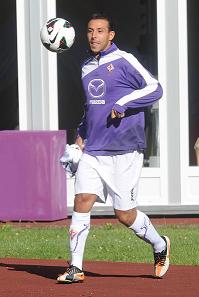 At this time, the most likely partner for Jovetic in front is Moroccan international, Mounir El Hamdaoui. El Hamdaoui finally makes his transfer to Firenze, having been denied at the last second by an inconceivable management foul up with former club Ajax last winter. He's looked good in preseason, scoring 5 goals in one friendly alone. 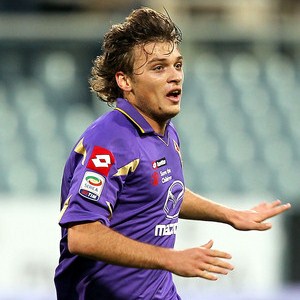 Making a bid to be the comeback player of the season, Adem Ljajic has been wonderful in preseason. Working hard,as perhaps he's never done, he's scored several times and shown great partnership with Jovetic. it may be that he has, or will, earn the starting spot next to Jojo. We'll have to see. 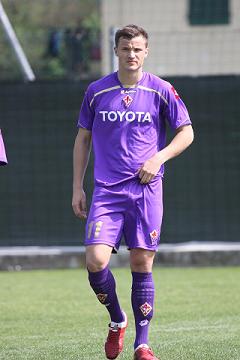 Also impressive in preseason has been the young Swiss international. One gets the feeling he may need a bit more experience before making the lineup, however, and could be on his way out on a loan deal.

Leftovers - On the squad, but without a spot
Ruben Olivera 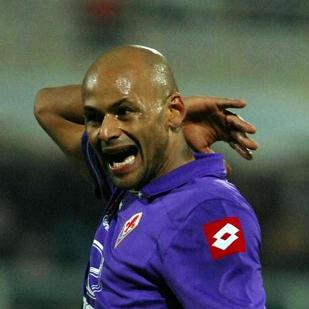 No room for Ruben. If someone wants him, they can have him. 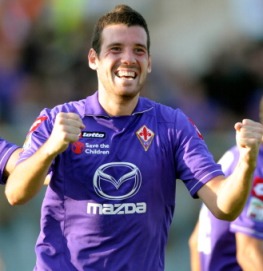 A starter by default last season, he looks likely to leave before the transfer window closes. 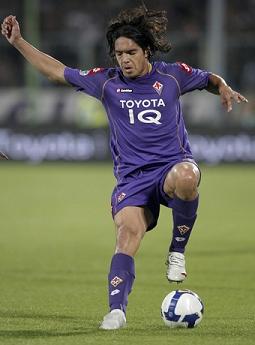 Not even practicing with the squad anymore, Vargas, once the cream of La Viola's crop, now sadly sits unwanted. He most likely will transfer out this window or the next, or leave for free next summer if no one picks him up.