Off With A Bang: Fiorentina 2 Novara 0

Share All sharing options for: Off With A Bang: Fiorentina 2 Novara 0 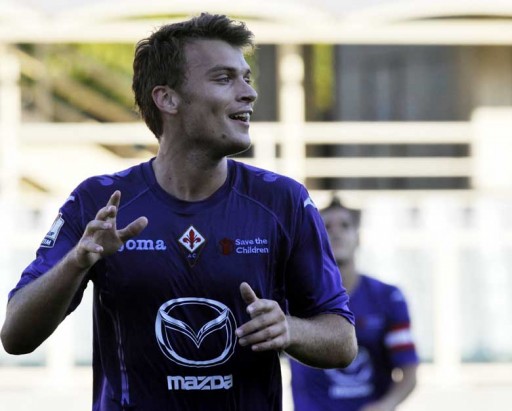 The new look Fiorentina start off their Coppa Italia with a more than positive result against recent Serie B entrants Novara.

This is what we were waiting for. To see a team, last year pushed against the ropes and hopelessly thin and static, come out with a style that can only be described as the Renaissance Tiki Taka. Crisp passing, creative finishing, and even a goal directly off a free kick, this is the Fiorentina everyone was waiting for and did it ever deliver. Fiorentina charged out of the gates in the first minute, already pushing down on the Novara defense with Borja Valero and Pizarro, who already looks like a team veteran, delivering one through ball after another, providing excellent service to JoJo and Ljajic who played in the center forward position. It was the same Ljajic who broke the deadlock just before halftime, collecting a flying ball and acrobatically sending it into the back of the net.

It was only mere minutes after halftime that Pasqual, sitting from 20 meters out, smashed a lovely curled free kick into the near post. It was a symbol of sorts of the kind of personal revolution Pasqual has experienced over the course of the last season, and being the most senior member of the team, he sets an example for his younger defensive counterparts. One of the most pleasant surprises of the match was watching Roncaglia, who plays like a pit bull in defense. His broad body provided one crucial intervention after the other and he always seemed to be in top form and ready whether on the left or the right. Cuadrado made his first appearance and as many of our commentators noted, his entrance to the box is excellent even if he was a little imprecise in his shooting in the final half. Definitely something that could be improved. Fiorentina definitely delivered a sterling example of the changes we've faced this summer and should be ready to face Udinese next week!