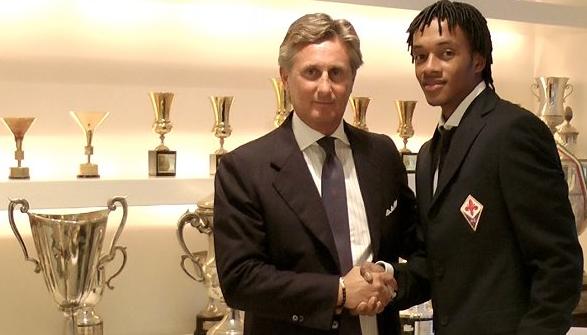 “Fiorentina announces that it has acquired, on loan with the right to redemption, the playing rights of footballer Juan Guillermo Cuadrado, from Udinese.”

Fiorentina have made their first move to restore a severely depleted and dysfunctional midfield, acquiring Juan Cuadrado on loan from Udinese. Cuadrado looks to replace recently sold Valon Behrami, who left for Napoli with Allesandro Gamberini earlier this month.

Cuadrado is 24 years old, from Necoclí, Colombia and can play all three positions on the right side, right winger, midfielder and back. The Columbian International, who got into 33 matches for Lecce while on loan last season, has superior ball handling skills and scored 3 goals with 2 assists.

Prior to his loan stint at Lecce, Cuadrado had been unable to break into the Udinese lineup on a regular basis, playing in only 10 matches in 10/11 and 12 in 09/10 with no goals or assists. He came to Udi from Independiente Medellín where is played in 33 matches with 2 goals in the 08/09 season.