Addio Amici; You Will Be Missed...

Share All sharing options for: Addio Amici; You Will Be Missed... 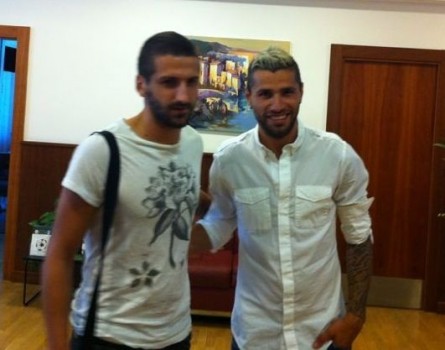 It's Official. Napoli have announced the outright purchase of midfielder Valon Behrami and central defender Alessandro Gamberini from Fiorentina. The players have passed their medicals and will practice with their new squad starting tomorrow. Also moving along is Lorenzo De Silvestri, being loaned to Sampdoria, with Samp holding the right of redemption.

In his short Viola career, lasting only a year and a half, Valon Behrami had become much loved and respected for his all out effort and also for his refusal to defect to the ultimate enemy, Juventus, who looked to poach him at the winter window.

Ultimately, an inability to sign a contract extension and a dispute over the 2012 London Olympics spelled the end of the 27 year old Swiss International's Viola career, which ended with an even 50 matches played, no goals scored but 4 assists.

Last season's Team Captain, the 30 year old Gamberini, ends a much longer campaign, coming over from Bologna in 2005. Playing in 189 Serie A matches for La Viola and 18 other matches in European Cup competitions, scoring 6 goals in those matches. In that span he played for Cesare Prandelli, Sinisa Mihajlovic and Delio Rossi.

Also unable to reach an agreement on a contract extension, and with the accumulation of younger players at his position, Gamberini was considered to be expendable and so was sent to Naples.

Lorenzo De Silvestri came over from Lazio in 2009, was never able to break though to a permanent spot on the lineup and the purchases of Mattai Cassani and Facundo Roncaglia made him superfluous to the lineup. Nevertheless, LDS was able to play in 74 matches, scoring twice with 5 assists.