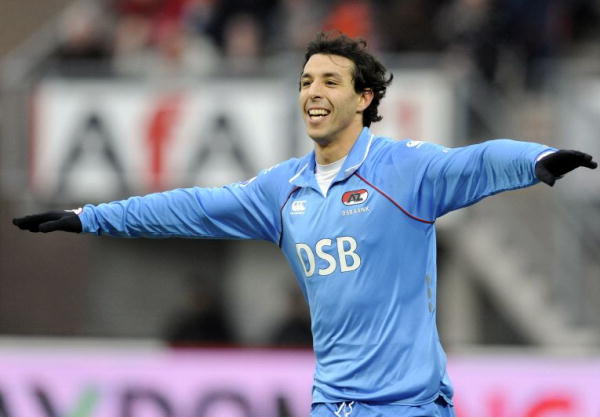 It took nearly 6 months to get him here, but today ACF Fiorentina officially announced the acquisition of Mounir El Hamdaoui.

In January of this year, Fiorentina had the 27 year old, Dutch-Moroccan Striker signed, sealed, but not delivered as the deal with Ajax fell through at the final minute of deadline day

This was reportedly because Ajax had asked for a bank guarantee statement from Fiorentina that would assure them of payment on the transfer, but that it was requested too late into proceedings. There was not time to acquire this before the 7pm Italian time deadline passed and the transfer subsequently fell through. Interestingly, El Hamdaoui saw a move to Espanyol on the last day of summer transfer window fall through for reportedly similar reasons.

The 27 year old, Dutch-Moroccan Striker comes to La Viola from Ajax, where he was relegated to the youth team for two years because of personal issues with Frank de Boer. In the season prior to that, he scored 19 goals in 38 appearances for Martin Jol.

Before moving to Ajax, El Hamdaoui had a very successful stint at AZ Alkmaar, from 2007-2010, with 69 goals in 84 appearances. In 2008-2009 he led AZ Alkmaar to only their second title, was the goal scoring leader in the league and was named the Dutch Footballer of The Year. Unfortunately, AZ Alkmaar's sponsor went bankrupt and left the club in financial difficulty and he was sold to Ajax to lighten the wage list.

Prior to AZ, he played for Willem II in 2006, scoring 3 goals in his first four matches before a serious injury benched him for nine months. In the following season, he only played two matches before being sold to AZ.

In 2005, Martin Jol brought Mounir to White Hart Lane to play for Tottenham Hotspur, but he was unable to get any first team playing time, so they loaned him to Derby County. He appeared 6 times, scoring two goals before a shoulder dislocation sent him back. He recovered and was sent back to Derby at the winter transfer window, but a groin injury cut that loan short as well. He was sold at the end of that season.

El Hamdaoui started his senior career in 2001 with SBV Excelsior, where he had been a youth player, along with friend, Robin van Persie. He spent four years with Excelsior, racking up 74 appearances and 35 goals.

El Hamdaoui has also played Internationally, 3 matches for the Dutch U21 squad and 5 matches for Morocco. His recent banishment by Frank de Boer has seen him left off the current Qualifying squad and getting called back up to play for his country should be a strong motivating factor.