Share All sharing options for: What Happened Here? Fiorentina 2 Novara 2 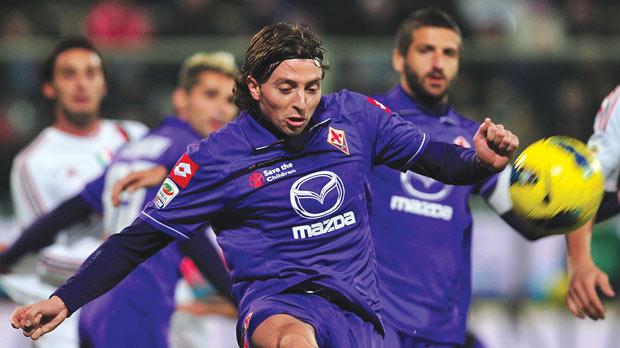 Fiorentina fought back from a 2 nil deficit to draw Novara and bring them one point away from season salvation in a match that saw Riccardo Montolivo write a fine ending to his time in Florence.

So we've now hammered Rossi's scuffle into the ground and he's now gone. The team has two games to salvage a single point, and Riccardo Montolivo put on one of the finest displays we've seen in a while from him while barely scuttling a third with a stunning display of acrobatics.

Fiorentina came out of the gates in the first half with Ljajic serving Lazzari who fired directly at Coser. Novara sealed the lead mere minutes later when Rigoni found Jeda completely unmarked by a lost Camporese, allowing him to fire a header from point blank range. Fiorentina continued with shots from Lazzari, Salifu, and Cerci, but it was Porcari who was pulled down by Lazzari in the viola box and Rigoni transformed the penalty. Meanwhile, Ljajic and Rossi decided it was a fine time to rehearse for the company theater production of "Rocky". Fiorentina went into the half with low morale in what must have been one of the more interesting halftime speeches of all time.

The second half turned into the Montolivo show. He came roaring out of the gates testing Coser on the first shot before Cassani was pulled down and he sent the Novara keeper the wrong way with a confidently placed penalty. Novara tested the viola net once more with Jeda making a mazy run through the viola defense and scaring Boruc, but it was Montolivo once more who fired it in from the edge of the box and set the score straight. Meanwhile in Turin, Juve didn't feel like returning us any favors. Montolivo fired off a piece of acrobatic skill but it was Novara who were determined to have the last laugh with Porcari who barely placed it over the bar.

Boruc 6 - Not at fault for either goal, never truly tested the entire game.

Natali 4 - Strangely plays way too wide and doesn't give support in the back.

Nastasic 5 - Suffers the curse of the back line but not as bad as the other two. Stays confident.

Cassani 5 - Same as Nastasic and also earns the penalty

Montolivo 7.5 - Dude, where you been all season?

Salifu 5 - Solid in the first half. Disappears in the second.

Lazzari 4 - In the first minutes, he looks decent, then after the penalty, it's all downhill from there.

Marchionni 5 - Suprisingly attacker like. He hasn't played consistently but puts his heart into it when he does.

Pasqual 4 - Didn't even notice he was playing until he started picked needless fights.

Cerci 4 - Still can't play 90 minutes, but got a couple of decent shots off.

Delio Rossi 1 (generously) - Sorry it had to end this way. You only get the point because you played Montolivo and the gamble worked. At least you can't say we didn't give you chances.

Game of the season (literally) this weekend when we take on Lecce, and then Cagliari after that, we're 99% secure, lets just end it already.