Share All sharing options for: Meet The New Boss 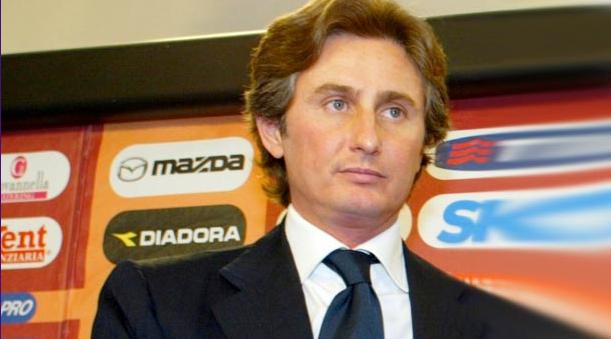 ACF Fiorentina have announced the signing of Daniele Prade for the position of Sporting Director.

The 45 year old former AS Roma DS will be presented by President Cognini at the Franchi tomorrow morning.

Prior to his time at AS Roma, Prade managed Teramo, Frosinone and Ternana. His first signing at Roma was coach Luciano Spalletti and he will most likely start his Viola term with the signing of a new coach as well.

During his AS Roma tenure, the squad won a Scudetto, 6 second places, 2 Coppa Italias and 2 Supercoppas.

Prade is the sporting director and his partner will be Eduardo Macia as Technical director. Macia has been a talent scout at Fior since November of last year.

Macia is from Spain, spent two decades as a player, scout and sporting director at Valencia, moving to Liverpool and then to Olympiakos.

He has spent a lot of time with one, Rafael Benitez.

Excerpts from the Press Conference
Cognigni:
We return Fiorentina to Europe

The mandate that I give Daniel Pradè is to rebuild a competitive team right away, and bring back the excitement which in recent times has gone from the Franchi.

On DDV words (regarding fans and leaving)
There is no hallway, Diego does not run away, no desire to run away from Florence.

In Florence there’s an incessant, argumentative critical-ness, but regardless, Diego’s words do not refer to supporters of Florence. Unfortunately, also in Florence, there is a small fringe of supporters who hold hostage the good fans.

On Rossi and Ljajic, I repeat: there are too many tensions, and someone may lose his head. Too many pressures, we must review things (to make things calmer).

And then I add: the financial fair play will be crucial. In Italy live years of purgatory, and then maybe come back to win the Champions League. And ‘an alarm, the fringes extremists of bad fans could ruin what the good companies are trying to do. As Diego said, however, he was speaking in general, not specifically to Fiorentina fans.

Prade:
I thank the Delle Valle for giving me this opportunity. My goal is to reproduce the enthusiasm in Florence, I have a great desire and believe that together we will do great things.

Jovetic? It ‘a player crazy and will be our point of departure, the center of the project. Of course, we’ll talk with him, hear what he thinks,

The coach? “It will be a choice made ​​with the head and not the belly. It is our priority, we will evaluate the technicians, look into their eyes. I think that Fiorentina have a roster of important players, they will be assessed, those who give away and who to keep. But I repeat: it will be essential to choose the right coach. ”

On LJiajic: “I really like Liajic, I want to speak with Eduardo Macia and then decide. Also on Vargas, we want to talk and then we’ll see.”

Montella? Each coach has its pros and cons. I repeat: we must not make a mistake with the coach, we do not want to hurry. And then Montella has a problem: Montella has a team, the coach of the Catania. would be a problem ..

Autonomy of choice: “I have full independence, but I know my staff and I love them. Macia have known since the time of Valencia and will work closely together. I am convinced that working with more people is the right choice.

On youth: “I’ll evaluate the budget, Macia will organize the rest. In Rome, worked in the same way with Bruno Conti here: Macia will be my Bruno Conti”

The attackers and the case Mutu: “In football you have to throw it inside, and the attacker will be the most important choice. On Mutu? I remember the episode. The deal was already done, would be an advantage for all. Too bad … ”

The current squad: “We will have a mix of youth and experience. Florence is a major city, an important place, young people are good … when things are going well. This year the key points we’ve taken away and without the players’ experience would be difficult to do. “