Share All sharing options for: Fior 0-0 Cagliari; Fade To Black 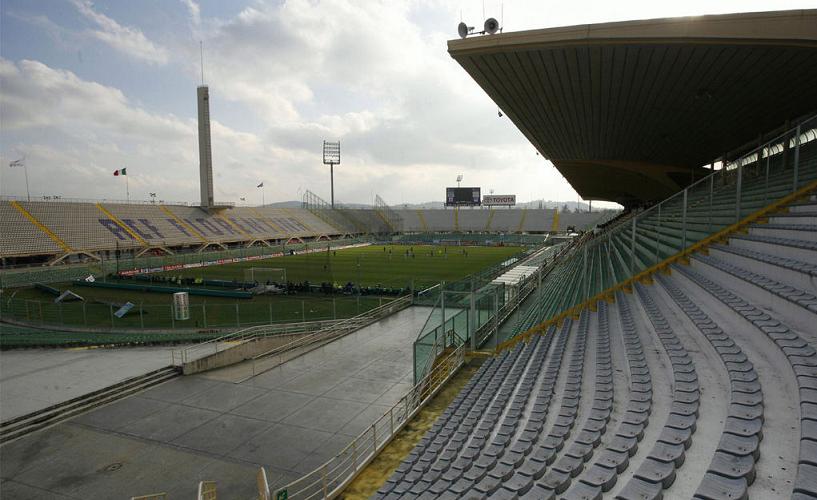 The curtain falls and the lights dim as another season draws to a finish. The play will start again, but who knows what script shall be written and whom the players are that will read it.

A dark, dreary, sparsely populated, rainy Stadio Artemio Franchi was the perfect backdrop for the last act of what can only be described as a tragedy in the Classical sense as Fiorentina saw out a dismal, pathetic season with a lackluster 0-0 tie with Cagliari this afternoon.

Recap
With virtually all of Fiorentina's stars unavailable, caretaker manager Vincenzo Guerini choose to start with La Viola's ragtag group of substitutes, rather than field youngsters and Primavera players. The lone exception to this was young Brazilian backup goalie Norberto Murara Neto, although Amidu Salifu and Boadu Maxwell Acosty managed to get on the pitch due to injuries to Marco Marchionni and general suckage by Andrea Lazzari.

Fiorentina started in a 4-4-2, with Lorenzo Di Silvestri, Cesare Natali, Felipe and Captain for a Day, Manuel Pasqual ahead of Neto. Romulo, Marchionni, Houssine Kharja and Lazzari filled out the midfield with Ruben Olivera and Alessio Cerci out in front and I do mean out in front as neither man could manage to stay onside all match.

There weren't a lot of hi lights in this mess as Fior only managed four shots on former Viola reserve goalie Vlada Avramov, none of which were on goal. Cagliari managed eleven shots, but only three on and only one of those required any effort at all from our Brazilian, who is aiming for a starting spot on the Samba Boys Olympic squad. The result saving stop by Neto was in the 88th minute as Radja Nainggolan fired a shot in the corner from the top of the box, but Neto sprawled and parried just wide to preserve the point.

Fiorentina were assessed 10 offside calls, one of which was shown to be in error and cost Natali a goal.

The result sees Fiorentina end the season with 46 points, 6 points less than last season and one point less than the year before. To further deepen the depression around this squad, owner Andrea Delle Valle deserted his seat about 10 or 15 minutes into the match as he became offended by chants by the few fans in attendance as the chasm between Viola Tifosi and team management widens exponentially.

Report Cards
The only person that really deserves a score is Neto, he gets a 6.5.
Everyone else a 5.

Quotes
Natali:
I have played my last match for Fiorentina.

Neto:
My Future ? We'll see, I do not know. I hope I can play with the shirt of Fiorentina. I am a professional, I am ready to help the society.

Changes in management are rumored to be coming, along with a new Sporting Director and a new coach, which should be announced within ten days, according to our pouting owner.

Montolivo, Marchionni, Natali are definately gone. Kharja, Olivera and Lazzari are probably leaving, although Lazzari's play down the stretch may have saved him a seat on the bench as a reserve. Adem Ljajic's status is still up in the air, possibly will be sold or go out on loan.

Questions remain as to the status of Artur Boruc, Captain Gamberini, Manuel Pasqual, and Alessio Cerci as well.

It will be a long, contentious rumor-filled summer to be sure.