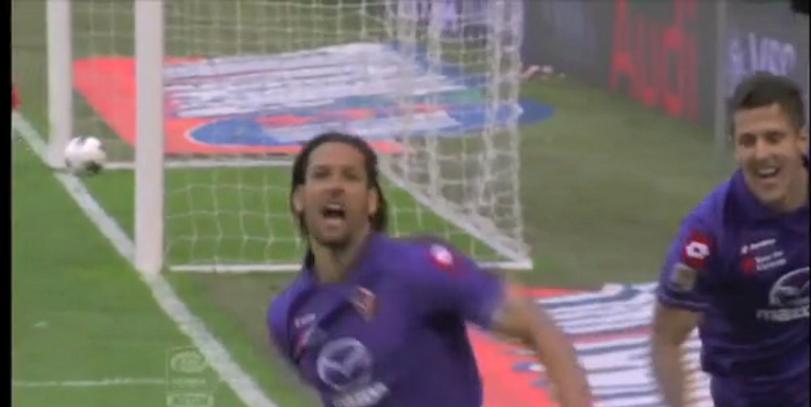 It couldn't be worse in Viola Land, could it? Five starters on an already depleted squad out for injuries and suspension, fans in revolt, executives being fired, even the Other Brother, Diego Delle Valle had to come to town to give this squad a dressing down.

On the other hand, AC Milan, league leaders, with the leading scorer, Ibrahimovich. To add to Milan's momentum was the return of Antonio Cassano from heart surgery. Fiorentina really had no chance at all.

But today something magical happened, something that hadn't happened at the San Siro in more than a decade, since the days of Enrico Chiesa. Fiorentina beat AC Milan in Milan. The scoreless tie back in November at the Franchi had broken a streak of 7 straight wins for the Rossoneri. The win today is the first for Fiorentina since a 3-1 win at the Artemio Franchi in November 2005.

The win moves Fiorentina ahead of Parma and Genoa into 15th place, still just 5 points from relegation.

Recap
Milan coach Massimiliano Allegri was quoted as saying he expected Fiorentina to sit back, but La Viola came at the Rossoneri early, with Stevan Jovetic getting an early chance at the 4th minute from a pass by Houssine Kharja, in for suspended Riccardo Montolivo, but it went just wide.

5 minutes later Kharja launched a long shot, but it was over the bar, another shot by Jovetic from Kharja was blocked in the next minute.

In the 12th minute, Jovetic won a free kick and a yellow card on Bonera, but Ljajic's free kick attempt soared high.

It wasn't until the 14th minute that Milan even got a shot, a blocked attempt by Abate, but the chance seemed to light a fire under Milan and they began to press until an 18th minute shot from Zlatan Ibrohimovic had to be saved by Artur Boruc.
Muntari had a chance right after but sent it wide.

After two corner kicks for Milan, Fiorentina raced back, with Valon Behrami getting a shot off, assisted by a surprising Lorenzo Di Silvestri, who made the most of his chance to start as Mattia Cassani is suffering from a sore back.

Milan continued to press, however, another shot by Ibra blocked, a corner, a missed shot by Zambrotta and finally, in the 30th minute, Fiorentina conceded a penalty as Maxi Lopez went down and Matija Nastasic was called for a very dubious penalty, which was converted by Ibra easily. Things were looking bad.

Fiorentina did not let the bad call get to them, however, and continued to press and won a free kick deep in Milan territory and only a fingertip save by goalie Christian Abbiati kept Adem Ljajic from his second goal in as many matches.

It wasn't over for Milan either, however, as Lopez drilled a shot off the woodwork, but the squads left the field for halftime with Milan ahead 1-0.

Fiorentina came out in the second half, just as they had in the first, pressing hard and it paid off immediately as Di Silvestri got a ball through to a hard charging Jovetic, who was just onside and wound up one on one on the goalie and did not make a mistake with the equalizer. Jovetic's 13th goal of the campaign.

Milan came right back at La Viola with four straight shots, although the first three were blocked, the fourth required a save. The match went back and fourth until the 73rd minute, when young Viola defender Camporese needed to be replaced and long idle, but not forgotten, defender Felipe, got into the match.

With 11 minutes left in relegation, Coach Delio Rossi pulled out his Ace in the Hole, Amauri and the move did not fail him as Amauri scored on a back and forth play with Jovetic in the 89th minute to put the Viola ahead and give Amauri his first goal in Viola.

Milan came back furiously, falling over at every opportunity, trying to get the ref to save them, but he refused and not even the return of heart patient Cassano was enough to salvage a tie.

Report Cards
Boruc(6.5) - One or two good early saves and a late punch kept Fior in it and he really looked into the match from start to finish. 4 saves officially
Camporese(6) - some good, some bad, but considering he was on ibra most of the time, well done. subbed for Felipe due to injury; Felipe(6) - there's been a lot of talk about this guy, but he was ready to come in when called upon, made a contribution and didn't screw it up. FORZA
Natali(6) - solid in the center, limped to the finish line as he seemed to be holding his ribs. kept Ibra out.
Nastasic(6.5) called for the penalty, but that really was a harsh call. stopped an Aquilani shot.
DiSilvestri(7.5) - Man of the match. Got the assist on the Jovetic goal, outran practically the entire Milan squad twice and raced back to defend as well.
Behrami(6.5) - The Warrior as always. Monto who?
Kharja(5.5) - worked hard, but nothing seemed to come of it, Subbed late for Olivera, fitness; Olivera(NA) - just held his ground.
Lazzari(6) - still has trouble with passing and running into people, but he was in the right place to block a shot towards the end.
Pasqual(5.5) - Got a yellow early (undeserved, I thought), and had to play within himself. took a ball to the face later and seemed to just hang back from there.
Jovetic (7) - goal and an assist and was there anything more sweet than the calm, cool back and forth with Amauri to win it.
Ljajic (6.5) - Another Free kick on, took a world class save. pushed forward, worked with Jovetic. Last two games have really put him back on the map. subbed late for Amauri; Amauri (7) - Could not have picked a more special time for his first goal. HISTORIC

Rossi (8) - He takes the heat for the losses, I'm giving him the glory for this win. With a strapped together lineup, going down a goal on a dubious penalty and his squad still comes back to win. Every substitution worked, even Felipe. FORZA ROSSI

Quotes
Amauri:
“I am very happy. After so much suffering, we finally won
“I dedicate the goal to my wife. We should always go on to the field with this hunger.

“Did I do a favour for Juventus? I do not care, all I care about is doing a favour for Fiorentina. These are three fundamental points for us. I don’t care about the rest.”

Rossi:
“Yesterday in the press conference someone asked what on earth we were going to do in Milan, but I go to play games and look for the result,” smiled Rossi.

“I saw a good performance and perhaps we felt more psychologically free because we had nothing to lose. I am happy for the lads, the directors and the fans. It was an important match and I only wish we’d played this way more often.”

“You come here and play a good game, then go behind to a penalty like that… My players did very well, because a blow like that is enough to kill an elephant, especially as news filtered through that all the teams behind us in the table were winning.

“The club and fans deserve more than this situation. The Della Valle brothers have always been close to us and never abandoned the team, even when we were indefensible.

“Can this result change the Scudetto race? As far as we are concerned, the only important thing about it was breaking away from the relegation zone.”

Looking Ahead
Palermo at the Franchi on Wednesday. Injuries are still an issue. Gamberini probably won't go, Camporese hurt and with a short turnaround, probably won't be ready either. One interesting thought is that maybe LDS played himself into a starting role today, so you could theoretically see Cassani, if his back is better, back on defense, with Lorenzo slotting in with Behrami. If Cassani can't go, that leaves Felipe.

Montolivo and Cerci are off suspension. Montolivo will replace Kharja, almost certainly. Cerci should not see any time. maybe not the rest of the season, certainly not at the Franchi. you would be able to hear the jeers all the way to Rome.