Share All sharing options for: Zero to Hero: Roma 1 Fiorentina 2 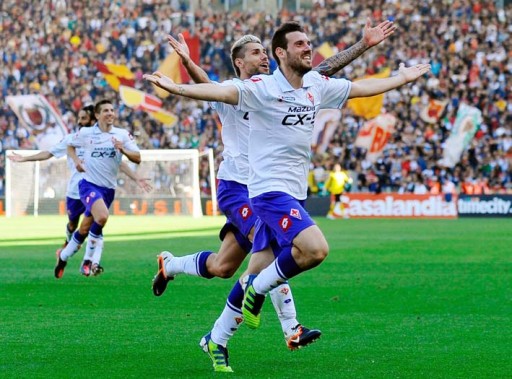 Fiorentina shocked Roma at the Olimpico today in a historic victory that saw the viola win in Rome for the first time in 20 years. Spearheaded by Andrea Lazzari's superb performance, the viola have all but secured protection for next season with four games to go.

Andrea Lazzari has spent a majority of the season as the punchline of jokes, criticism and ridicule. He's fumbled one goal line ball after another and was Montolivo's perfect awkward counterpart. Today we saw the fighting Lazzari, serving one goal and scoring another in what was his best performance of the season.

Fiorentina came roaring out of the gates in the best of ways when at two minutes from the whistle, Lazzari flicked the ball to Jojo inside the box who looped a header over Curci's head for the 1-0. It was a dream start for Fiorentina who whipped the ground under Roma's feet. Fiorentina carried on inside Roma's half, the Giallorossi were pinned back and had trouble stringing their passes forward. Fiorentina continued to pound Curci with runs from Jojo and Cerci while Borini and Totti tried to pressure Boruc, but the half went to the viola who took a relaxed lead to the dressing room.

Roma came out with a renewed spirit in the second half and it showed when Greco and Borini pounded Boruc while Fiorentina tried to defend one corner after another and Boruc was getting worn down. Eventually the viola wall tumbled when Marquinho let out a ripping strike from outside the area to Totti who flicked it in for the draw. At 77 minutes Rossi switched JoJo for Ljajic and Cerci for Amauri who struggled to get into the game. After several minutes, Amauri crumbled to the ground grasping his groin and was substituted for Olivera. Fiorentina was desperately trying to push through and spent the last ten minutes of regular time trying to weave through the Roma defense. At 90+1 Ljajic broke free on the right side, and fired a screamer directly at Curci who couldn't handle the ball. The ball found it's way to an onrushing Lazzari who controlled and fired into the top of the net sealing the win and a much needed 3 points.

Boruc - 6.5 - Solid match, didn't have much to do in the first half but stood strong in the second during Roma's barrage of corners, and made a great game winning save on Totti. Could do nothing about the goal.

Nastasic - 7 - Expertly guides the defense like a veteran, takes the ball forward, and frustrated Totti all afternoon.

Camporese - 6.5 - Placed farther back than Nastasic but stands firm in the Roma rush, placing his body where it's most needed. Just barely misses catching Marquinhos goal.

Natali - 6.5 - Standard operating procedure for Natali, stands like a column next to Camporese and concedes very little. Still a solid figure in the defense.

De Silvestri - 6 - He does well in the first half but visibly falls back in the second, conceding several corners and looking a little nervous. Good runs on the side though.

Kharja - 6.5 - Much improved performance from the Moroccan and gives a steady boost in the midfield, even threatening the goal several times. Well done.

Behrami - 7.5 - It's the usual "lion-like" performance. Intimidates his performance, wins his contrasts, breaks up play, and wins back possession. Masterclass.

Lazzari - 8 - Involved in both goals. Crosses from the first, and then a gorgeous volley on the second to give Fiorentina a much needed morale and table boost. His best performance of the season and he's a menace the entire match.

Cassani - 6 - Like his partner on the other side, he does well in the first half but noticeably falls short in the second.

Jovetic - 7.5 - He's the extra gear this team needs. He's the point where every ball should go and with him, they look like they have an identity and an idea. His 14th goal with 4 games left and he looks like he still has steam to carry through the end of the season.

Ljajic - 6.5 - Immediately comes on and puts his head in the game, serving the screamer that led to the winning goal. Much improved in three days.

Cerci - 6 - Finding himself alone is starting to be his thing. At 30 minutes he gets way out in front but loses his time to shoot and lets Roma regroup, however he adds a bit of speed and fantasy to the game so the team doesn't fall behind.

Amauri - 5 - Comes on and never really moves very much. Isolates himself in the front and waits for the ball. Substituted off early for a groin injury.