Share All sharing options for: Fior 0-0 Inter; Close To The Edge 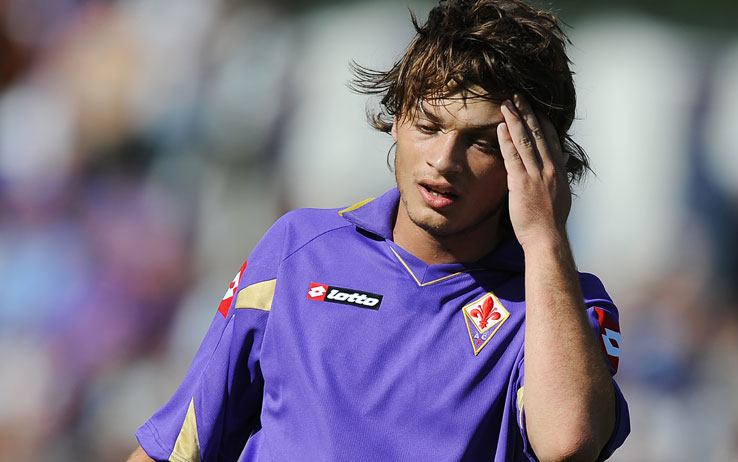 Adem Ljajic couldn't convert a penalty kick to give Fior a big win.

Another huge match up, another patchwork lineup and another big result early this morning as Fiorentina held Inter scoreless and moved another point closer to salvation. In what was sure to be a tough string of matches, at Milan, plus Palermo and Inter at the Stadio Artemio Franchi, La Viola have managed five HUGE points in the battle to stave off relegation.

The tie, along with a three goal loss for Cagliari, what was a four goal loss for Genoa before fans started throwing things on the field and the match was suspended and a tie for Lecce move Fiorentina into 15th place, ahead of Cagliari on goal differential, 2 points ahead of Genoa and 3 points ahead of Lecce.

Recap
Coach Delio Rossi rolled out his now standard 3-5-2, but the lineup fielded was anything but standard as injuries and suspension again decimated the pool of available players. Stevan Jovetic, Riccardo Montolivo and Allessandro Gamberini were all out for injuries and Amauri was suspended for yellow card accumulation.

Fiorentina came out in with a classic counter-attack game plan, allowing the Nerazzurri the bulk of possession, but ready to drive forward and frequently caught the older and slower squad on the wrong foot as Houssine Kharja nearly made Inter pay in the 2nd minute, although he slashed the shot wide.

Inter continued to press forward, with Diego Forlan getting a shot off at the 5 min mark, but Artur Boruc claimed it easily. The played continued as it started, but the first half ended without another shot on goal.

It took 20 minutes of the second half for another shot on, a save for Boruc in the corner on a shot from Ricardo Álvarez
Shortly thereafter, Valon Behrami was forced to come off the field for fitness issues. He was replaced by promising youngster Amidu Salifu.

Then Andrea Lazzari got a through ball, went across the front of the goal and was taken down by Inter Goalie Julio Cesar. In what was, perhaps, one of the few correct decisions of the day for ref Paolo Valeri, the foul was considered too wide to be a scoring chance, so the goalie only received a yellow card.

Without Viola Talisman Jovetic or Amauri available, it fell to youngster Adem Ljajic to take the penalty and he served up a weak shot that Cesar parried wide of the net.

That proved to be the end of any serious chances for either squad, although Cerci had a breakaway called back incorrectly for offside and the squads shared the points.

Report Cards
Boruc(6.5) - 4 saves, 13th clean sheet. getting it done
Camporese(6) - solid on his side defensively, had a nice drive forward, but held on too long and coudln't get the cross off.
Natali(6.5) - Old Father Christmas with very nearly a perfect match. Won every header and was never threatened
Nastasic(6.5) - Missed a wide open net, but never threatened in defense. took a yellow for an elbow into Milito's back.
Cassani(6) - concentrated on defense in the first half, came forward more in the second. well ordered.
Behrami(7) - All over the field again. If only every viola player gave the same effort . Subbed for Salifu due to fitness; Salifu(6) - Came in and played well, did not seem to affect the team badly with the switch.
Kharja(6.5) - held the middle of the field well, had some nice plays with Pasqual, did as good as Montolivo would've
Lazzari(6.5) - lots of turnovers, but earns a PK and a yellow card on Julio Cesar, better than normal.
Pasqual(6) - shuts down Maicon all match, had some decent crosses, got a yellow for excessive complaining in the refs mind, in reality it was Valeri who was excessive with his cards all match.
Ljajic(5) - just never looked comfortable, gave the ball away a lot, served up a weak PK. Subbed for Acosty; Acosty(6) - beat his man a few times, but was all alone by then as Cerci became a spectator late in the match.
Cerci(6) - Looked promising early. Should've had a one on one with the goalie, but for an incorrect offside call. Got tired and started standing around and watching late. no one else to sub in for Rossi, however.

Rossi(6) - a point is a point and especially against a team like Inter, even with Inter's disappointing season and even more so without your starting strikers, not to mention Gamberini and Montolivo.

Quotes
Rossi:
“Inter are stronger than we are, but we played with great team spirit. We suffered on occasion and at times went too deep, but games are decided by incidents and we deserved to win,” said the Coach.

“Inter had two or three shots on goal, but never really created any danger for us. We had a few dubious offside flags go against us, but the incidents certainly didn’t help.

“The fans have always been close to us, though of course they showed their dissatisfaction when the team did not play with the requisite determination. If we had always played like this, then the supporters would’ve been happier with our season.”

“Our youngsters already showed against Milan that they have character. At this moment it is important to have the mind free of pressure, especially at home. Besides, let’s just say younger players are forgiven for certain errors more than older figures.”

Stramaccioni:
“We have to give credit to Fiorentina, as they put in a strong performance, especially in their movement without the ball,” said the tactician.

“It wasn’t easy to play against this Fiorentina side, as Milan and Palermo also struggled recently.”

Looking Ahead
A midweek tussle in the Capital against Roma on Wednesday. Amauri will be available, Pasqual will be suspended. Jovetic's condition will be a big question mark the next few days, along with Gamberini, Montolivo and Behrami.

With Genoa at Milan and Lecce hosting Napoli, any result could be a big plus.