Share All sharing options for: Fior 0-0 Palermo; Hold On, Baby Hold On 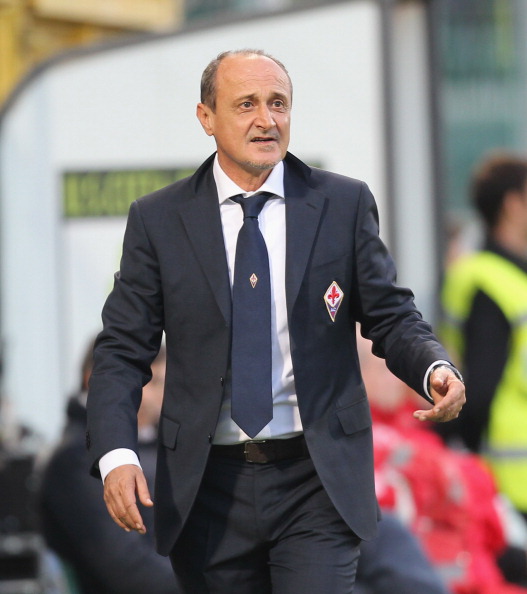 'Cause it's closer than you think, And you're standing on the brink

Fiorentina came into today's match with Palermo at the Franchi on a high after an amazing win in Milan and looked to ride that momentum to victory, but only managed a point from a tightly contested battle.

Shots were flying around like Spring fireflies this evening, 20 shots for Fior and 14 for Palermo, although only 9 were on target, 7 for La Viola and 2 for the pinks. Possession was exactly even, and both squads had the same number of fouls called, 16. Fiorentina dominated in the amount of corner kicks, 14 to 1 and many of those were dangerous, but the ball just wouldn't cross the line.

The tie and other results around the league saw them drop to 16th place and only 3 points from relegation, although Genoa are still between Fior and high flying Lecce. Oddly enough, 10th place is only 3 points away as well, and it looks like anything can happen down the stretch.

Recap
Conventional wisdom would say to not mess with a good thing, but Coach Delio Rossi changed things up. He did stick with the 3-5-2, but Captain Alessandro Gamberini returned for Michele Camporese on defense, next to Cesare Natali and Matija Nastasic. Riccardo Montolivo returned from suspension to line up between Manuel Pasqual and Houssine Kharja, with Valon Behrami and Lorenzo Di Silvestri rounding out the midfield, and weekend hero Amauri started instead of Adem Ljajic, next to Stevan Jovetic.

Early on it seemed like a great decision as Fiorentina came out flying, getting three shots on goal in the first few minutes, a header by Natali, a shot by Amauri and a shot off the post by Nastasic, but Inter-owned palermo goalie Emiliano Viviano was able to parry each of the three shots away from his goal. Those saves proved vital as that was the most dangerous La Viola were to be all match.

Palermo slowly got into the game from that point and nearly-Viola Ezequiel Munoz called Artur Boruc into play off a free kick to make one of his two saves of the match. Valon Behrami nearly got off his duck right before the half, but for Viviano.

The second half was very much a back and forth affair, with a lot of shots, but not a lot of real chances until minute 81 when it appeared the goal had been scored by Amauri, but it proved to be an intentional hand ball and he will miss the next match in Roma. The rest of the match finished without incident and the two squads shared the pts.

Report Cards
Boruc(6) - two saves, never seemed in danger. his 12th clean sheet of the season.
Gamberini(6) - solid, never in danger
Natali(5.5) - neared screwed up early and had some shaky moments, but had a good overall match. I think Father Christmas was a bit tired
Nastasic(6.5) - took a knock early but manned it, was totally wiped out by Artur, but got up, shook it off and finished the match. Nearly got the winner, but for the post and Viviano. He is going to be our defensive stud for a long, long time.
Di Silvestri(6) - started off where he ended in Milan, very good down the side, second half tailed off, probably fatigue. subbed for Cassani; Cassani (NA)
Behrami(7) - I love this guy, worked his butt off and nearly got his first goal.
Kharja(5.5) - had some great service from the many corners Fior got in the first half, but disappeared in the second after taking a bad knock and had some bad turnovers in dangerous spots. subbed for Lazzari; Lazzari(NA)
Montolivo(4.5) - merde
Pasqual(5.5) - had some nice runs early, but really didn't serve the ball well at all and didn't link up well with montolivo or kharja.
Jovetic(5) - had some nice passes early, but as time wore on he just started running at groups of defenders and gave the ball up repeatedly. prehaps some fatigue.
Amauri(4.5) - three chances at goal in the first five minutes,m but couldn't get it past the goalie. Stupidly put the ball in goal with his hand, rightfully getting a yellow card and made himself unavailable for the Roma match. On the plus side, he'll be free of yellow card worries for probably the rest of the season and he'll be able to rest.

Rossi (6) had the team raring to go and by all that's right and holy, the team should've scored in the first few minutes. Fatigue and slight injuries seemed to wear down the squad and his subs didn't make any difference. Considering the fact that one of those was Lazzari, it's not too surprising. all that being said, another clean sheet and a point closer to salvation.

Looking Ahead
Fiorentina travel to Roma, who have scored 10 goals in the last three matches, although they have also given up 7, and the Giallorossi will be looking to avenge the 3-0 loss served up by La Viola at the Franchi back in December. Amauri will have to be replaced by Ljajic, although, if Vargas is back, you could see a formation change with Vargas, Jovetic and either Cerci or Marchionni.

In Other News
Reportedly, after a long period of negotiations, Ismaily have decided to agree to Fiorentina’s €1.5 million offer for 21-year-old defender Ahmed Hegazi.

In a statement posted on their official website, ‘El Daraweesh’ said that they expected to receive half the sum as soon as the deal was signed and the rest of it in early July. The decision was made during today’s board meeting headed by team chairman Raafat Abdel-Azim.

Ismaily’s statement also noted that they were expecting ‘Viola’ representatives to visit the club in the coming weeks in order to sign documents officialising the transfer agreement.