Share All sharing options for: Parma 2-2 Fior; Livin' On The Edge 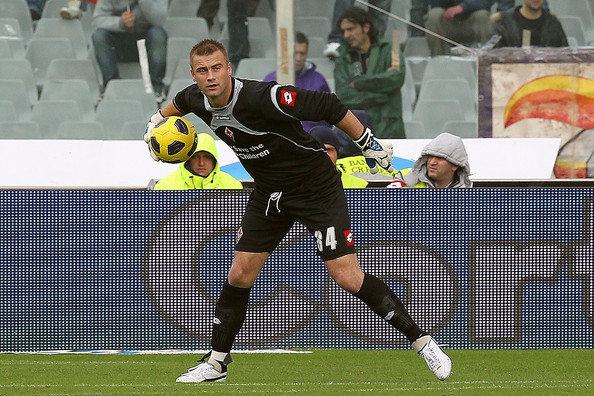 Only Artur Boruc and his early heroics kept La Viola in the match in the first half...

This match wound up 2-2, however and, perhaps, that's a fitting result for such a back and forth, wild affair. The single point doesn't really help Parma much, moving them up one place to 16th with 30 points and moves them 5 points ahead of the relegation zone. Fiorentina jump to 12th place with 32 points and, more importantly, 7 points ahead of relegation with 12 matches to go.

Recap
From a Viola perspective, this match had trouble written all over it. With Captain Alessandro Gamberini suspended and Vice-Captain Stevan Jovetic injured, the captain's armband fell to Manuel Pasqual and coach Delio Rossi was forced to try yet another formation with a 3-5-1-1. In front of Boruc were youngster Michele Camporese, Old Father Time Cesare Natali and emerging Serbian Starlet Matija Nastasic, fresh off a nice International performance and his first Serie A goal.

The first half was all Parma as Okaka's left-footed strike from 13 yards in the 26th minute required a great save from Boruc. Okaka eventually scored a few minutes later to put Parma ahead, 1-0. Fiorentina had two chances towards teh end of the half but Pasqual and Caporese bothe couldn't get the ball on net.

Fiorentina continued to press into the second half and 15 minutes in, after Allessio Cerci had been subbed for Camporese, won a free kick which Vargas served to Nastasic, who headed in his second goal in as many matches. Two other Viola were there with the young Serb defender.

11 minutes later, Manuel Pasqual fed Cerci on a break and the Roman made no mistake. Fiorentina couldn't hold the lead as Giovinco was taken down. Valon Behrami attempted to distract the striker and got a yellow card for his troubles, but Giovinco converted.

The thrills weren't over as Andrea Lazzari had two more distinct chances to score but couldn't get the ball on frame and Rizzoli lost his mind when he gave Valon Behrami a second yellow card and a red, then changed his mind and gave the yellow card to Nastasic.

Report Cards
Boruc (6.5) - man of the match in the first half, two big saves. saves a lob from might mouse to preserve the match in the second.
Camporese (5) - got beat a few times, most notably on the first goal, looked awkward and rusty. subbed for Cerci ;Cerci (7) - injected energy to an anemic offense immediately, scored a nice goal from a tough angle.
Natali (6) - looked solid in the middle.
Nastasic (7) - Giovinco rarely got the better of him, second goal in as many games. Our new star.
Cassani (5.5) - partly at fault for allowing the pass to break the first goal scorer, had a nice cross and a decent shot, but not on.
Behrami (5.5) - not his best effort, but not his worst. getting a yellow for the hi jynx with Giovinco was rash, but better he miss the next one than Juve.
Montolivo (5.5) - two steps forward last match, one step back this match. Seemed a spectator for all of the first half and much of the second.
Pasqual (6) - Out of position and looked it in the first half. in the second, got the assist on cerci's goal
Vargas (5.5) - like Montolivo, out of it the first half, but played better once Cerci was inserted.
Lazzari (4) - Horrible. his three first touches were turnovers, he missed two fairly easy goals late.
Amauri (5) - invisible much of the match, not surprising considering he was paired with an useless Lazzari, subbed late for Marchionni, in what seemed to be a defensive move, which didn't pay off. ; Marchionni - N/A

Rossi (6) - Considering the suspensions and injuries, a point and two goals on the road seems a minor miracle, but the fact that Fior had a lead and lost it, hurts the Tifosi a bit. one point closer to salvation and lets get on to the next one.

Looking Ahead
Sunday Morning at Catania, daily light savings time in effect, game at 10am eastern.
Nastasic and Behrami will be unavailable, Gamberini and Olivera will be off suspension and Kharja might be back as well.