Share All sharing options for: Let's Get Nasty: Fiorentina 2 Cesena 0 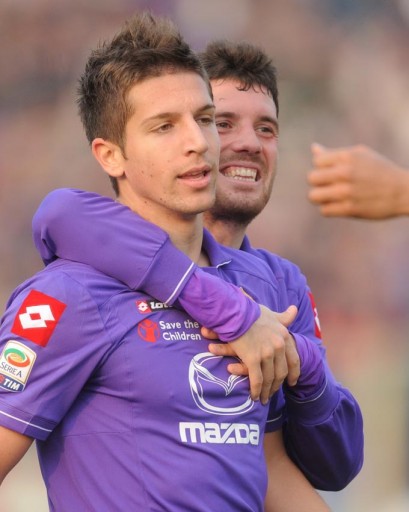 Today in beautiful Florence, Fiorentina got on the winning track with a wayward crossing own goal, and a slick shot from Matija Nastasic.

With JoJo staying to fight a minor knock, Fiorentina roared out of the gates with two Amauri misses in the opening 10 minutes, both coming from delicious crosses courtesy of Pasqual. At the quarter mark, Montolivo filtered a ball to Lazzari through the Cesena defense, who chipped a rushing Antonioli, and scraped the top of the bar. JoJo tried to make his mark on the match but couldn't fight a painful strain, making way for a loudly jeered Alessio Cerci (weather Cerci was being jeered for taking 5 minutes to put on his jersey or because he's not the most welcome man at the Franchi has yet to be determined) Despite occasions few and far between, Fiorentina went to the halftime room in dejected fashion.

Second Half
Fiorentina, proving for the hundreth time that they are a second half team, came out fighting when Montolivo served Gamberini in the area who just barely put it out. At the quarter mark, Pasqual rushed down the left side sending a cross to Amauri and instead finding an unfortunately placed Moras who lodged the ball into his own net. 1-0 Viola. Cesena tried to fight back in the next twenty minutes but Iaquinta and co found their passes frustratingly intercepted, and a sturdy defense held. At ten minutes from time, Nastasic found himself on the end of a well served cross, controlled it on his chest and fired it past Antonioli for the 2-0 and game closer. Despite a last minute counter attack from Iaquinta and Santana, Fiorentina were able to get a couple more shots from Vargas and Cerci who just barely missed the 3-0. With Boruc holding the ball safely, Fiorentina took the 3 points and moved closer to their salvation.

Boruc - 6 - A spectator the first half but crucial saves against Comotto and Santana in the second.

Gamberini - 6 - Calm and collected in the back area and has a chance to score at 53 minutes.

Natali - 6.5 - Gives ample weight to the back line and serves his partner, Nastasic, for the 2-0.

Nastasic - 7 - After a couple "no" weeks, he's back this week with his usual performances, frustrating Iaquinta and scoring his first match with coldness.

Cassani - 6 - Coming back after his suspension, he makes a couple important shots towards the goal, but seems to lose pace when covering Santana.

Montolivo - 6.5 - As awkward as it is to say, Montolivo had a good game today. He serves Lazzari with a decent through ball that Andrea scuffles, then has a good link with Vargas late in the 2nd to put some finishing pressure on the Cesena defense.

Salifu - 5.5 - If Monto was having a good game, Salifu was the sluggish one in midfield today, never really had his mind on the match, and rightfully subbed with Vargas.

Vargas - 7 - Glimpses of vintage Vargas who serves Cerci twice, Amauri once, and takes a couple shots on goal himself. One of his best matches in a long time.

Lazzari - 5 - Just not cutting it this season. Scuffles a simple chip, consistently losing the ball, and doesn't fit in with his teammates.

Pasqual - 7.5 - Pasquals best game of the season. He's active in almost every action, sends the cross for the 1-0 as well as consistently serving Amauri and frustrates the entire left Cesena side. Pasqual version 2005 has returned.

Jovetic - 6 - Plays a decent first half but it's clear that his injuries bother him.

Amauri - 5.5 - Maybe it's the lackluster service, maybe it's just bad positioning, maybe he's just not feeling the forwards, but it's just not going right now. It's becoming apparent we picked up "Juve style Amauri".

Rossi - 6.5 - Starts with the 3-5-2 to lukewarm response. In the second half he orders a 3-4-3 and immediately sees more service up front and a more vibrant midfield. After 3 straight losses, it's nice to see a decent result again.

Looking Ahead
Next weekend we're headed to Sicily to face a good looking Catania.