Genoa 2-2 Fior; Throwing It All Away

Share All sharing options for: Genoa 2-2 Fior; Throwing It All Away 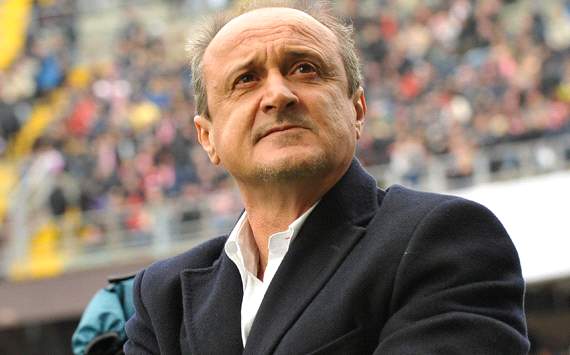 Fiorentina once again snatched a tie from the jaws of victory at The Marassi...

Fiorentina went into Genoa today needing a result against the Genoa Cricket and Football Club and came out with the point they needed. Fans were left wanting more, however, as La Viola took a lead and failed to hold it again as The Rossublu came back to tie late in the match. Rodrigo Palacio ran through three defenders before putting the ball past Artur Boruc, who was way off his line.

The goal was the fourth in a thriller between two teams fighting to stay in Serie A. Genoa had taken the lead early with a goal by Fernando Belluschi. Fiorentina equalized with a lash from Riccardo Montolivo and then took the lead by a strong laser-like header from Cesere Natali.

The 2-2 final score didn't hurt in the standings as the result, combined with three other ties, had Fiorentina holding their margins over each of the five squads below them in the race to avoid relegation.

Recap
There were many sub plots to this match, Former Viola players Sebastien Frey and Alberto Gilardino facing their old squad being in the forefront and it took only a few minutes until this plot came into play.

Marco Marchionni, playing for suspended Bone Head Alessio Cerci, crossed a nice ball to Amauri in the box, who one timed the shot into the right corner of the net, but Frey was there to stop the shot. 6 minutes later, Marchionni took a corner kick and crossed to the top of the box where Juan Manuel Vargas ran onto it, but shanked it wide.

Another 7 minutes passed before Genoa got a chance, as Biondini took a shot from outside the box, which Viola Goalie Artur Boruc captured easily, his only official save of the match. Genoa came right back as Gilardino got off a shot, but it was blocked on the way in.

The next 6 minutes passed by with only a wild shot by Vargas, but then Mesto got off a great cross to a virtually unmarked Fernando Belluschi who made no mistake with his header. 1-0 Genoa.

Genoa came right back and looked to blow it wide open, but Fiorentina absorbed the pressure and the next 10 minutes went by with only a few shots by either side, but nothing of note until minute 31 when Jovetic got another cross from Marchionni, but hit it straight at Frey. Moments later, however, Montolivo scored and evened the score with a strike.

Gilardino and Belluschi had chances early for Genoa, but failed to get the ball on goal and La Viola continued that trend as Vargas, Amauri, Vargas again, Montolivo and Marchionni all took shots in the next twenty-five minutes, but failed to hit the mark.

Finally, at minute 69, a corner kicked served by Vargas was deflected by a defender back to Cesere Natali and Old Father Christmas made no mistake. 2-1 Viola.

Four minutes later, Marco Marchionni got a knock and had to be replaced by Andrea Lazzari, Lazzari got a chance at goal, but headed it just wide and Fiorentina became increasingly more defensive minded. Genoa continued to press, but failed to get a shot on until Rossi threw the dice and brought on Lorenzo Di Silvestri for Amauri in a clear attempt to cement the victory.

The dice would come up snake eyes, however, as former Viola Gilardino headed a pass to Palacio, who shredded the Viola defense and put the game on even terms. Fiorentina tried to come back for the win, but really didn't have the players or the energy to pull it off.

Report Cards
Boruc (5) - was badly beaten for the first goal and also the second, which was called back for offsides. came way off his line for the tying goal late. Luckily genoa only got three shots on. I never got the feeling artur was all there and he only got one save.
Cassani (5.5) - never looked like he would be beaten on D, but he never really got into the offense either.
Gamberini (5.5) - beaten badly on the offside goal and completely beaten, along with the rest of the D, on the tying goal
Natali (6.5) - really was the man of the match until he picked up a knock on a lower leg late and lost a step. he was the first guy Palacio blew by .
Pasqual (5.5) - had a decent match from an offensive standpoint but was a liability on defense. Palacio was a bit fast for him.
Marchionni (6) - started rusty with a few turnovers, but held his own on the right for the rest of the time he was in, had a few good crosses and was faster than his man and required double teaming from time to time. came out late due to a knock for Lazzari; Lazzari (NA) - ehhhh
Behrami (6.5) - he's a warrior, picked up a silly yellow, but that's to be expected with the all out style he plays with.
Montolivo (6.5) - struggled a bit with his defensive responsibilities in the early minutes, was lost on the first goal, but made up for his mistake and had a very decent rest of the match
Vargas (6.5) - looked a lot more like the Vargas we remember. will need more of that down the stretch.
Amauri (5.5) - almost got the Viola off to an early start, but for Frey. poor effort on the later chance, one on one with frey and kicked it right into his stomach. however, he didn't really look like he was on the same team as Jovetic. that's a problem. Subbed for Lorenzo Di Silvestri; LDS (NA)
Jovetic (5) - been off 20 days and looked it. rusty, bruised and fairly lost most of the match.

Rossi (6) - Team came out slow and gave up a silly goal, but rallied and evened it out. second half took it Genoa and even got the lead. Unfortunate that Marchionni got the knock and messed up the chemistry and even more unfortunate that the only player Rossi deemed worthy to replace him was Lazzari. Pulling Amauri and putting in another midfielder in LDS was another bad decision, but hindsight is twenty twenty. He got the point that was absolutely necessary.

Coaches Quotes
“It’s a shame for the lads, because if we play games like this, then we deserve to win them. It just means this is a bad year,” said the Coach.

“This performance has to be a starting point. Perhaps the team lacks a little calm, as Fiorentina aren’t accustomed to fighting for safety.

“I changed system to rely on some more experienced players, because these young lads cannot handle the pressure and it seems unfair for me to put too much responsibility on their shoulders.

“Did I expect more from Amauri? I expected more from everyone, including myself. This is why I offered my resignation this week, as it’s too easy to blame others.”

Looking Ahead
Chievo comes to the Franchi. The Mussi Volanti are deep in the grip of The Dumitru Effect, being firmly ensconced in mid table and having three out of the last four matches ending in a tie. One would think they would come in looking for the single point or a cheap win.

Of the teams below La Viola, only Lecce have what might be considered an easy match, as they host bottom dweller Cesena. Siena host Udinese, while Novara travel to Roma and Parma host Lazio.

With a trip to Milan looming after the Chievo match, three points seem to be a must. Amauri and Montolivo will go into this match on their final warning, while Cerci will still be suspended.