A Tale of Two Teams: Genoa-Fiorentina

Share All sharing options for: A Tale of Two Teams: Genoa-Fiorentina 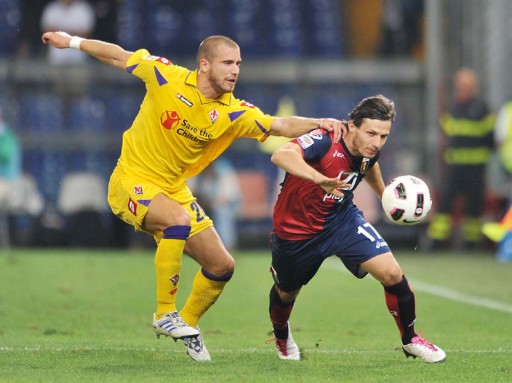 In what was possibly one of the most turbulent weeks in Fiorentina's history, the viola head up to Genoa to take on the Grifoni.

After a devastating 5-0 loss to Juve, the single greatest home loss in Fiorentina's 84 year old history, we're licking our wounds and after sending the boys to a retreat in Viareggio, we're heading up to Genoa to take on the equally suffering Grifoni.

The loss to Juve was the slap in the face the Della Valle's needed, and they responded with the quick dismissal of Corvino. Fiorentina don't have an excuse this week to mess this up.

Rossi returns to a 4-4-2 tomorrow with Boruc-Cassani-Gamberini-Natali and Pasqual shoring up the defense, while Behrami, Montolivo, Vargas, and Lazzari, cover the returning Jovetic and Amauri.

Pasquale Marino shows up with a 4-1-3-2 with Frey in goal covered by Moretti, Kaladze, Carvahlo, and Mesto while Veloso, Biondini, Belluschi, and Rossi cover ex man Gila and Palacio.

We're in desperate need for a confidence win so the boys need to deliver this time.