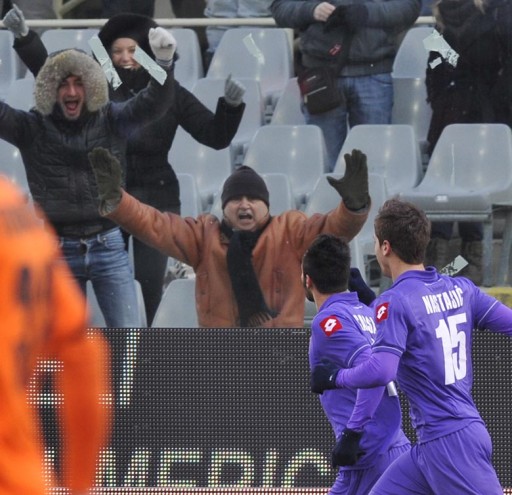 Delio Rossi's Fiorentina runs hot with a 3-2 win over third placed Udinese thanks to a Stevan Jovetic brace and Mattia Cassani.

Fiorentina are on a streak, with a positive attacking game, a renewed spirit, and as we saw today a never say die attitude. After going down to a sublime Toto Di Natale chip, Fiorentina roared back in the second half led by Jovetic and Cassani before succumbing to a consolation goal by Gabriel Torje.

Fiorentina's game admittedly started off in difficult circumstances with Udinese pushing hard on the wings and playing their trademark counterattack style which put pressure on Rossi's three man midfield. At the 14 minute mark, Montolivo misplaced a pass that found its way to the feet of Di Natale, who chipped it nicely past an onrushing Boruc giving Udinese the momentary lead. Fiorentina led by Amauri and Jovetic up front had their first occasion on 23 minutes when Amauri just barely missed the tap in from a Lazzari cross. At 28 minutes, Jovetic shot the ball from distance that bounced onto Pasqual's foot who shot it directly at Handanovic. Di Natale and Boruc fought it out all through the first half, with the Pole making a series of fine parries at Toto's efforts. Five minutes before the half break, Lazzari moved up the left side and fired a shot that landed onto Benatia's arm in the box. The referee made no hesitation pointing to the penalty spot, and Jovetic stepped up to take an ice cold shot right up the middle. Fiorentina went into the half on equal footing.

Fiorentina punished a wavering Udinese in the second half as a series of bounces in the box found it's way onto an unmarked Mattia Cassani who headed it in from point blank range and gave Fiorentina the lead. Ten minutes later, Pasqual had the chance to double Fiorentina's lead as he found himself one on one with Handanovic but preferred taking the shot instead of passing it to an open Jovetic. Ten minutes before the end, Jovetic ran up the middle and evading several defenders was pulled down once again by Benatia for the second penalty spot of the afternoon. Jovetic sent Handanovic diving and slotted it into the corner for his second of the day. 3-1 viola. Udinese brought in "Romanian Messi" Gabriel Torje who wasted no time linking up with Di Natale who served him just outside the area for the consolation goal. Udinese attempted one last counterattack but it ended in the arms of Boruc who sealed the first consecutive viola victory of the season.

Boruc - 6.5 - Couldn't do anything about either goal, made a series of acrobatic and crucial saves against Di Natale. Deserves his one year extension.

Gamberini - 6 - Played a bit more conservatively today given he was up against Di Natale. Doesn't openly risk himself but controls his area.

Natali - 6 - He suffers from Di Natale and later on Torje's fast runs and uses his body to mark his position but falls asleep on Torje's occasion.

Nastasic - 7 - He suffers in the back like his colleagues, but shows a level out astounding composure, and guides the defense like a veteran. Graceful.

Cassani - 6.5 - Plays a one on one with Amero in the first half who seems to beat him to every ball, but puts him in a cage in the second half and comes out roaring with a slick entry into the area and a crucial goal.

Behrami - 6 - A bit more of a reserved performance from the "usual" Behrami grit, but seemingly takes on the entire Udinese midfield on his own, constantly moves forward and doesn't shift into a lower gear the entire match. Warrior.

Montolivo - 5 - Ricky, Ricky, Ricky...clearly seems to be playing his last months for the paycheck, and demonstrates it with a pretty careless first half that includes his second Udinese assist of the season, and disappears for long stretches of the game before making brief appearances in the second half.

Lazzari - 6 - Puts a gear up, launches the cross that causes the first penalty, and puts pressure on the Udinese defense. A better effort today.

Pasqual - 7 - Arguably one of his better performances of the season. Beast on the wings, threatens Handanovic multiple times, and launches the occasional decent cross. Knows this team inside and out and plays to everyone's strengths. Too bad for the missed one on one opportunity.

Jovetic - 7.5 - A nightmare to Udinese's defense for ages to come. Launches multiple personal runs, scores both penalties with a cool and collected spirit, and continues to be the true leader of the team. Majestic.

Amauri - 6 - A subdued performance from last weeks acrobatics. He's frustrated by a distinct lack of service but himself is pulled into a mire by Benatia and Domizzi multiple times. His best occasion of the day was a missed tap in on the 25 minute mark when he missed a Lazzari cross by mere inches.

Delio Rossi - 7 - After the victory over Siena, Delio's boys come roaring back in the second half to bring the game to one of Serie A's best sides. There was lots of suffering, but the reaction and the spirit this team carried is exactly what's been missing the entire season.

Fiorentina are off to Parma next week to continue what could be a very positive streak.