Share All sharing options for: Lazio v Fiorentina; Point Of No Return 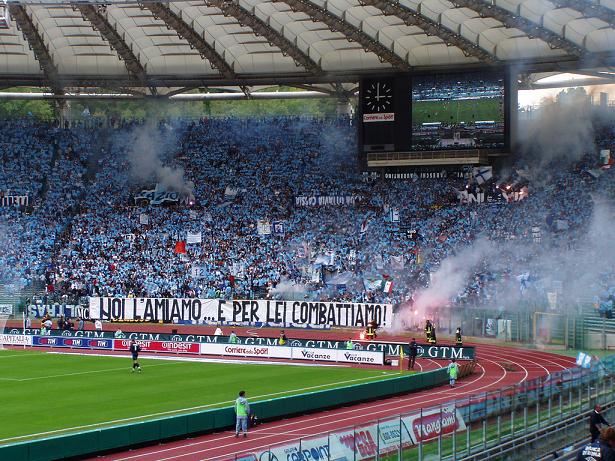 Fiorentina travel to Roma for an important match up with Lazio this weekend. Both squads are mired in their own chaos and seriously need a win to right their respective ships.

La Viola, currently in 13th place and 7 points from relegation, are currently riding a two game losing streak, with 5 goals given up. The midfield woes, which have plagued Fiorentina all season only look to get worse as Mattia Cassani, Ruben Olivera and Houssine Kharja all are unavailable to Coach Delio Rossi. Cassani for yellow card accumulation, Olivera for an elbow strike and Kharja to injury.

Another suspension to Captain and Right Back Alessandro Gamberini, also due to yellow card accumulation, will require a substitution in a defensive line that has shown itself to be anything but sufficient in recent matches. Either little used Brazilian Felipe or youngster Michele Camporese will fill in for Gamberini while Lorenzo Di Silvestri, coming home to his former squad, looks likely to slot in for Cassani. Late news states that Amauri also has a muscle issue and will be held out as a precaution, Adem Ljajic will start.

Lazio, while flying high in 4th place in the league, have given up 10 goals in their last three Serie A matches, although they managed to win one of those against Cesena. Add in 4 more goals in an Europa League tie elimination with Athletico Madrid and it was enough to cause coach Edy Reja to resign, and, although Biancocelesti Owner and President Claudio Lotito declined to accept the resignation, chaos still resides in Lazio Land and no one really knows what's going to happen or whom will coach on Sunday, although it looks like Reja will remain for now.

Among the issues causing Edy such grief is the lack of available players, Lazio has not fielded the same lineup for two games in a row for months and only had one defender available for Thursday's loss in Madrid, and that one defender, André Dias, is not available Sunday due to a red card.

Old Viola friend Luciano Zauri has been playing as a defender lately, but really it's anyone's guess as to the squad Mr Reja can field. Federico Marchetti should be back in goal and Fior nemesis Miroslav Klose, although he came out of the Palermo match, should also be available.