Share All sharing options for: Bologna 2-0 Fior; Sometimes you kick... 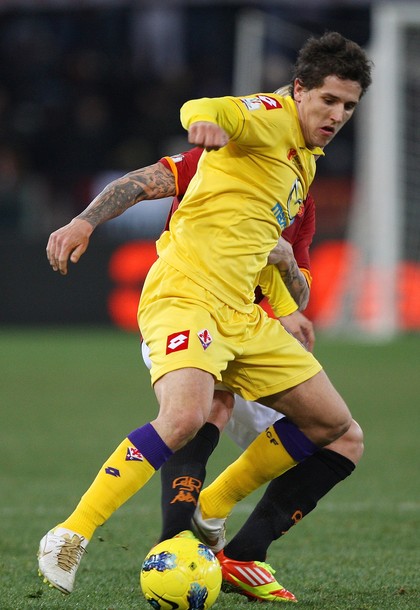 ... Sometimes you get kicked.

Fiorentina, coming off a painful drubbing by Napoli a few days ago and looking to gain ground from a game in hand against a team in Bologna, who, while being in much better form, coming off a 3-0 win at Inter, still resided below La Viola on the table, not only didn't get the result needed, but failed to score, again, for the league-leading 12th time this season and finished the game with ten men as newcomer Ruben Oliver got himself sent off for an ill-advised elbow. The two goals allowed, along with the three against Napoli put the Viola's goal differential in the negative for the first time since Nov 27th.

The result leaves Fiorentina in 12th place with 28 points, 7 pts from relegation and Bologna moves up to 13th.

Recap
Fiorentina looked much more likely to score throughout the first 30 minutes, but Bologna Goalie Jean Francois Gillet came up big time and time again until La Viola got caught to far ahead and got burned on a counter. After a mistake and a second Bologna goal before halftime, a Viola victory looked very unlikely and the Olivera red card just made it all but official.

Gillet was called on again before it was over as Jovetic tried again towards the end of the match, but to no avail.

Report Cards
Boruc(5) - given up 5 goals in 180 minutes, should not be a happy man
Gamberini(4) - merde. nutmegged on the second goal and stood around and allowed a bologna player to pounce on the rebound.
Natali(6) - defensive man of the match. won a lot of headers, that being said 2 goals allowed is 2 too many
Nastasic(5) - got caught out some, had to come out early; LDS - n/a
Cassani(5) - got caught forward time and again, didn't cross for crap and couldn't seem to beat his man. might be time to shelve the 5 man midfield and move him back to a four man defense.
Lazzari(4) - total merde
Montolivo(4) - at least the coach now admits he plays him cuz there's no one better. first touch was a turn over and it got worse.
Olivera(4) - like an all bean diet, lots of wind and no result. add in a red card and hes just another wasted transfer.
Vargas(5) - had a pretty good first half hour but faded from there. his mistake led to a goal. came out for salifu, might be time to say happy trails to el loco this summer; Salifu - n/a
Jovetic(6) - 5 shots, none of them on net. need better accuracy.
Amauri(6) - everything but the final result. 4 shots, 2 of them on, one of them calling for a monster save.

Rossi(5.5) - a loss is a loss, but the team had the right spirit, they are trying to create opportunities, they're just making mistakes and teams are capitalizing on those mistakes. it may be time to change up the formation. the 5 man midfield isn't doing a damn thing and the 3 man back line is bleeding goals.

Looking Ahead
Sunday at Lazio. No Gamberini or Olivera. Camporese the likely replacement for Gamberini. Jovetic with the armband. Kharja might be an option in midfield and Viola Fans will hope for the return of Valon Behrami.