Share All sharing options for: Feeding the Fire: Fiorentina-Napoli 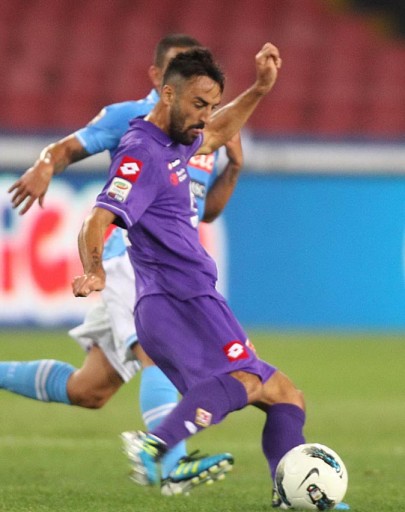 After a sudden 2 week break due to Italy literally freezing over, Fiorentina, now two games back, takes on the ever-ambitious, yet recently struggling Napoli at the Franchi in a match that could solidify much needed continuity to stay up in the upper reaches of the table.

Fiorentina recorded their first two consecutive wins against Siena and a scintillating comeback victory against Udinese. Tomorrow in beautiful (and in this case not ridiculously snowy) Florence, Fiorentina welcome Napoli, caught between Champions League success, and a teeter tottering Serie A campaign. On Monday, Napoli beat Chievo 2-0 ending a four game winless streak. Napoli have especially struggled when they're out of the roar of the Stadio San Paolo, and Walter Mazzari has recently come under the De Laurentis microscope, especially for getting himself ejected from both ties of their upcoming Champions League clash with Chelsea.

Fiorentina have made the best of their time with multiple training sessions, and building a team around the Jomauri coupling. Despite last minute scares for Jovetic and Behrami, both of them are set to feature tomorrow afternoon. While the team has been away, the Primavera is smashing their way through Viareggio, winning their group phase, and grasping a last gasp victory against Lazio that sees them setting a semi-final date with arch-nemesis Roma who they won the Coppa Italia from, and the Supercoppa earlier in the season.

Off the field, it's been the usual mercato antics especially surrounding JoJo and Behrami, and a admittedly troubled Vargas who is sorting out personal dilemmas. Rossi has had the boys training day and night despite the cold weather as evidenced by the constant stream from Behrami and De Silvestri's twitters.

Fiorentina confirm their 3-5-2 with Natali, Nastasic, and Gamberini holding up the back while new boy Olivera takes over for the suspended Lazzari, next to Cassani, Behrami, Salifu, Montolivo, and possibly Vargas for the injured Pasqual. JoJo and Amauri take center up front but Rossi also called up Marchionni and Felipe.

It is still unknown what kind of changes Mazzari will make in light of his Champions League clash, however he's replaced Morgan De Sanctis with Rosati in goal, while Campagnaro, Cannavaro and Britos cover a 3 man defense. Maggio, Dzemaili, Inler, and Dossena cover Hamsik and Lavezzi behind Cavani, however there is a chance Pandev may get the start.

The Tactical Key
As strong as Napoli is, they are prone to gaping holes and devastating errors, and distracted by Roman Abramovic's watchful eyes, they might be in a lower gear tomorrow afternoon. It's our responsibility to keep a tight defense, especially ahead of their front three, and take every opportunity we have. Amauri needs to step up his game after falling back a step against Udinese. His contributions to attack could be the way to win the fixture.