Fiorentina are off to the wonderful whimsical world of Zemanlandia as they face off against Zeman's Roma at the Olimpico in a match that sees a cooler headed viola side bounce off from two consecutive draws.

Share All sharing options for: Feed the Flames: Roma-Fiorentina 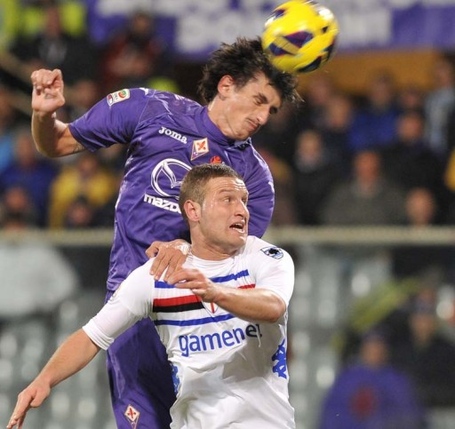 Maybe it was all the adrenaline and the excitement going to the head, maybe it was the high expectations, but after a stunning five week win streak, Fiorentina have come back to Earth with two consecutive 2-2 draws with Torino and Sampdoria. To say that last weeks draw was disappointing is the least. An exhausted viola side took the field which saw Stefan Savic as the protagonist, and an own goal from Gonzalo Rodriguez. Fiorentina head off to an exceptionally difficult weak against Roma at the Olimpico, a team that features an all out attacking side that has been both the benefit and bane of the Bohemian manager. Fiorentina have returned to strength this week, even having JoJo, Toni, and Aquilani back in the fold, but a week that included a devastating tragedy sees Montella's side reshuffling his midfield even if it results in unconventional tactics.

Roma have been increasingly strong at home this season, yet not impenetrable, facing defeats from Bologna and Udinese while their road form has been highly suspect. Internal spats have seen Daniele de Rossi frozen out from the squad for a long period of time and questions even linger about Osvaldo's place in the team after a massive summer shakeup. Nonetheless, power performances from Mattia Destro and an upsurge from Francesco Totti has left Roma fans feeling much more confident in recent weeks after a 3-2 defeat to Lazio.

Montella has wisely chosen to replace Pizarro with Migliaccio as the hard man in the middle with Cuadrado, Pasqual, Aquilani, and Borja, while Roncaglia starts again from the first minute with Savic and Gonzalo in front of Viviano. The recuperated Toni is joining El Hamdaoui up front but JoJo HAS been deemed match fit and will begin from the bench.

Stekelenburg returns to the starting berth with Balzaretti, Castan, Marquinhos, and Piris behind Florenzi, Tachsidis, and De Rossi who cover Totti, Destro, and Osvaldo.

It's a battle of the exes which see Montella, Aqulilani, and Toni taking on Osvaldo. The threats here are De Rossi, eager to show why he wants to stay in the capitol. Totti who is a very frequent viola scorer, and Osvaldo who would love to continue his Batistuta impersonation act by scoring against his former team. Expect an expanded role from Cuadrado this week as having Toni and El Ham up front leave a lot of room for poaching but not overly creative chance making. Cuadrado could serve as the second point if needed and take a JoJo like role until the latter becomes available. Roncaglia brings adequate security to the back and we'll have to see if Migliaccio continues the hard man midfield role.