After a rousing win over Siena and Udinese, Fiorentina head to Sicily to take on a potentially tricky Palermo side. 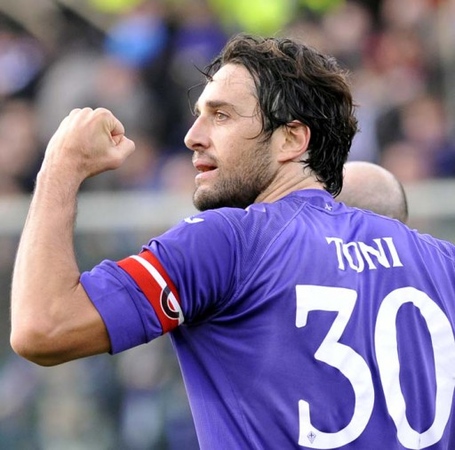 There are few things in Italian football that are more exciting than Maurizio Zamparini. For the last few seasons, the Palermo president, featuring a temper higher than that of Mt. Etna, has run his show like a rotating circus of players, coaches, and resigning threats. His side has gone from being once at the top of the food chain of the Italian game, competing for the Champions League, to a side that seems like it's in constant turmoil. However despite featuring talents like Fabrizio Miccoli, this season's Palermo has run hot and cold, holding Milan to a 2-2 draw and winning the Sicilian derby one week, and then crashing into oblivion the next. Palermo are currently at the top of the drop zone, while the umpteenth manager, Gian Piero Gasperini, struggles to keep them afloat.

Last Sunday, Fiorentina shot back into Champions League contention with a complete demolishment of Siena. Ex Palermo man Luca Toni continued his highly impressive form with a double while Alberto Aquilani continued his Renaissance with his own hit into the back of the net. Despite losing Roncaglia to yellow cards, Fiorentina look like they're back in the hot seat, buoyed by a midweek Coppa Italia win over Udinese with a masterful performance from Borja Valero. One of the impressive performances of the last two days was young goalkeeper Neto, covering for a much maligned Viviano and forcing Montella to make tough decisions about the lineup. Neto is once again in the spotlight this week as he starts once again to send Fiorentina into the Christmas break on a high note. Tomorrows match is an ex man derby of sorts featuring ex viola Miccoli against ex Palermitanos Luca Toni, Giulio Migliaccio, Francesco Della Rocca, Mattia Cassani, Christiano Lupatelli and Emiliano Viviano.

Montella looks to keep his Siena formation with slight alterations. Neto starts in goal with Tomovic covering for Roncaglia with Gonzalo and Savic while Cuadrado returns next to Pasqual and Aquilani, Pizarro, and Borja cover Toni and Jovetic from the 1st minute. At the last minute Pizarro could give way to Migliaccio as he's been working separate but El Hamdaoui returns to the bench in good condition.

Palermo show up with Ujkani in goal covered by Munoz, Donati, and Van Bergen, while Morganella, Barreto, Garcia and Kurtic cover Ilicic, Miccoli, and Dybala.

Obviously the one to watch here is frequent viola scorer Miccoli and Ilicic but if we control the midfield we can control the match. The question is can Neto keep up the level in his performances that he's shown in the last week? It's time to bring 2012 to a happy close.