Help! I Need Somebody! Fiorentina-Sampdoria

Fiorentina face a potentially tricky Sampdoria side with a minor injury crisis up front that leaves the viola with El Hamdaoui and Mati starting together while missing JoJo, Ljajic, and Toni.

Share All sharing options for: Help! I Need Somebody! Fiorentina-Sampdoria 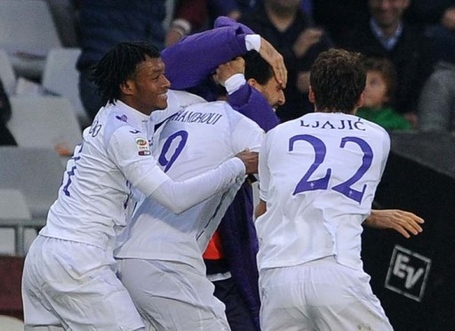 A few years ago, Sampdoria turned into one of the darlings of Serie A. With an impressive lineup featuring Antonio Cassano and Giampaolo Pazzini, they stormed through the season finishing fourth and heading off to the Champions League. A year which was to see them make the jump from little team to big contender ended in a massive disaster as Pazzini, Cassano, and Palombo were shipped off, and Sampdoria fell to the pits of Serie B. One year later they were back in A, helmed by veteran Ciro Ferrara, but although their season started brightly, old habits fell hard and they were soon on a seven game losing streak which saw them dangerously lingering once again at the bottom of the table. Although they've been on a two game winning run against Bologna and taking the derby against Genoa, they face a massive task this week as they come to the Franchi to take on Fiorentina missing two key pieces in Maxi Lopez and Eder.

The viola on the other hand took a tiny step back last week when they struggled away at Torino, just barely managing a 2-2 draw but boosting confidence in the abilities of one Mounir El Hamdaoui. Fiorentina now are in third place, just two off of 2nd placed Napoli, and 7 off of leading the table. A midweek win over Juve Stabia in the Coppa Italia boosted spirits but anything other than a win tomorrow could be costly before the winter break. Injuries saw Luca Toni and Alberto Aquilani come off early while Pizarro was dearly missed, forcing Mati Fernandez into an unfamiliar position. Tomorrow he takes on the second striker role as he partners El Ham in leading the charge while Pizarro returns to the lineup and takes control of directing the game.

Montella is still figuring out final fitness tests which sees Viviano starting in goal and a toss up between Tomovic and Savic partnering Gonzalo and Roncaglia. Cuadrado and Pasqual take the wings while Romulo fills in for Aquilani with Pizarro returning alongside Borja. Mati partners with El Ham up front while Alberto may begin from the bench.

Sampdoria are decimated as of late, missing Eder, Pozzi, Maxi Lopez, and latest forfeit, goalkeeper Sergio Romero who had to fly back to Argentina for personal reasons. Sampdoria will show up with Da Costa in goal covered by Mustafi, Gastaldello, Rossini, and Berardi, while Obiang and Maresca support Krsticic, Munari, Poli, and Icardi. We might get to see an appearance from ex-viola Lorenzo De Silvestri at some point.

Main threats here come from the talented Icardi and Poli while the key would be not to allow any silly goals like we did last week. Also substitutions (especially game changing ones) shouldn't be kept for the last ten minutes. A more solid midfield game that was missing against Torino should be the key to breaking an already fragile Genovese side.