Firenze brought out the love for David Pizarro today...

Firenze and Fiorentina brought out the love for David Pizarro today, with lots of banners in the stands and Stevan Jovetic giving Pizarro a chance at a penalty kick. Pizarro was mobbed by the squad in an obvious display of devotion when he converted. Pizarro was also given the Captain's armband when Manuel Pasqual was subbed out.

Pizarro had only returned to Italy from Chile late Wednesday, after his sister's funeral. His sister had passed away two weeks ago.

Fiorentina came into the match in six place, tied with AS Roma, who had given them a pretty definitive 4-2 beating last week. Coach Vincenzo Montella once again had to juggle his lineup. Besides Pizarro's return, Stevan Jovetic came back to the fold after several weeks with an injury and Juan Cuadrado was suspended due to yellow card accumulation.To further complicate things, starting goalie Emiliano Viviano was unable to go due to a hip injury.

Montella brought out Brazilian youngster Norbeto Neto for his first Serie A match of the season to replace Viviano. Neto played in two Serie A matches last season, a scoreless draw against Cagliari and a loss to Atalanta. Neto also has two wins under his belt in the Coppa Italia this season.

In front of Neto, Montella played Facundo Roncaglia, Gonzaol Rodriguez and Stefan Savic. Romulo started in place of Juan Cuadrado, next to Alberto Aquilani, Pizarro, Borja Valero and Manuel Pasqual. Luca Toni rounded out the lineup next to Jovetic.

Beleaguered Siena Coach Serse Cosmi brought in his club to the Tuscan Darby following two consecutive 3-1 defeats, to AS Roma and Catania. Last place Siena is at the bottom of the table with only 11 points after starting the season with a 6 point deduction.

Siena had their own Neto on the pitch in front of goalie Gianluca Pegolo. Also in defense were Massimo Paci and former Viola Felipe.

Fiorentina came out determined to right the scales as they had been out possessed in Rome and took firm control of the match early, getting the first three shots of the match in the first 7 minutes. Aquilani barely missed the first shot, Roncaglia took the next two, one requiring a save and the other a header over the net.

Siena got the next shot, but Fior countered and Pasqual served a perfect cross to Toni who made no mistake and headed it into the net for the first goal 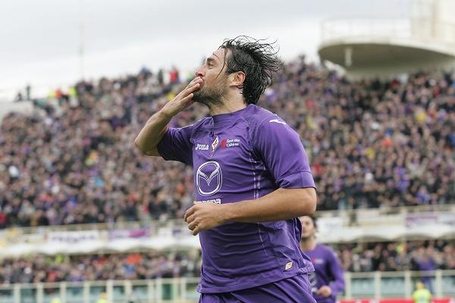 It only took 3 more minutes for Toni to get back into the area and Felipe pulled him back to give La Viola their first penalty kick of the match. Pizarro stepped up and put it into teh back of the net, although the Siena goalie guessed right. 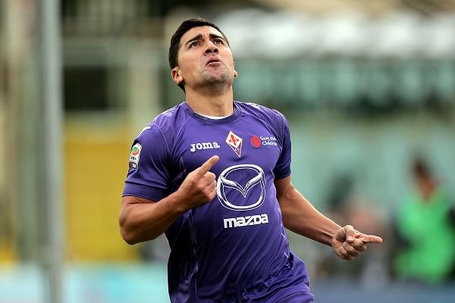 Siena made an attempt to come back after the second goal, getting four shots off in succession over the next 20 minutes, two of which were saved by Neto, but Fiorentina managed to strike once again before the halftime whistle.

Romulo put a pass in front of the net, with three Viola players there and Aquilani put it and the match away. 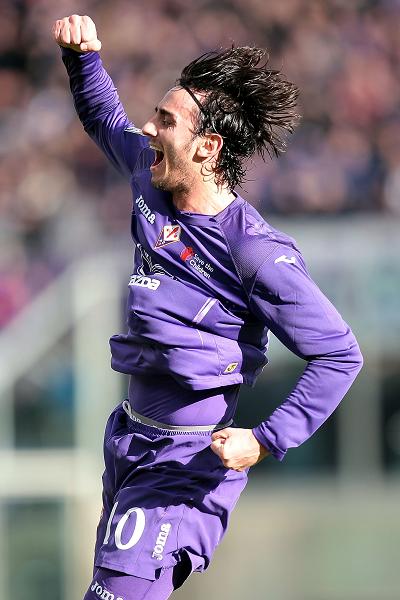 The half ended with Fiorentina dominating possession, 67% to 33%. Shots were closer, 8 to 5 in Fiorentina's favor, but la Viola had 4 shots on net to only two for Siena.

The second half was much more subdued for Fiorentina fans as Siena came out and took the first 4 shots of the half in the first 15 minutes, but only one of those required a save.

Jovetic came out after a good hour played, with Mounir El Hamdaoui coming in to replace the forward.

Fiorentina then turned the burners back on, getting the next 3 shots off, but Siena countered and got a goal of their own to temporarily raises hopes for the visitors.

10 minutes later, however, Valero crossed to Luca Toni, who headed in his second of the match and that was all she wrote. The brace for Toni gives him 6 on the season and ties him with Jovetic for the leading Fiorentina scorer this season. 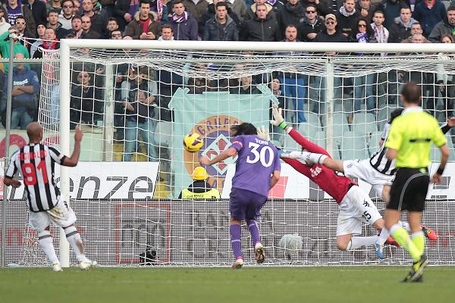 El Hamdaoui earned another penalty for Fior, but Aquilani missed it high and wide, but really, another goal would've just rubbed salt in the wounds.

The match ended with Fiorentina owning 62% of the possession, out shooting Siena 16 to 12, with 5 shots on to 4. The win, coupled with a Roma loss at Chievo, moves Fiorentina to 5th place, 1 point behind Lazio and Napoli, who still has a match to play this evening.

Neto(6.5) - Came racing out early to parry away a chance and made a fantastic save a bit later. made three total saves and really had no chance on the lone Siena goal. Good game for his first Serie A start. Will probably go in the Coppa match as well.
Roncaglia(6.5) - Nearly got back on the scoring chart, was never at risk in the back. Got a yellow on a handball which will disqualify him for Palermo, but it really was a harsh call.
Rodriguez(6) - Two bad clearances straight to Siena players were the only marks against him today. Other than that, his usual strong performance.
Savic(7) - Savic played his best match as a Viola. A nearly perfect match for him.
Romulo(7) - Maybe his best match as well. An assist on Aquilani's goal plus lots of possession on his side.
Aquilani(6.5) - Great control and passing, scored a goal, only down side was his missed penalty.
Pizarro(7,5) - Great to have him back. Scored a goal and owned the midfield, only downside was his 10th yellow card. He needs to get that under control, at 17 cards, he can be banned for every card.; Migliaccio(NA) Only had a few minutes and the game was all but over.
Valero(7.5) - Valero was everywhere today. An assist to Toni was just the cherry on top
Pasqual(7) - An assist on the first goal and a nearly flawless performance. Subbed for Llama; Llama(6) - The match was all but over by the time he got in, but showed some grit.
Jovetic(6) - Showed some good passing and running skill, had a chance at a shot, but couldn't get it past the defender. Good showing for his first match back in a while ; El Hamdaoui(6) - Earned a PK, and made some nice runs.
Toni(8) Two goals, and a chance on a third. Always in the right spot, looked a lot like his old self.

Montella(7.5) - Did not let the squad stew on the last bad result. Had the team ready and never let them give up. Got some players some rest and some bench players some good PT.

I'm going to start rating the refs as well, since I have such harsh words for them during the week.

Paolo Tagliavento(5.5) - Tagliavento had a good first hour, I had no complaints at all, but then he gave Roncaglia a yellow for what seemed to be an unintentional hand ball and then ignored or missed two Siena handballs, one in the box, and another on a free kick that was clear as day and purely intentional and led to a Siena break out and a goal. Wound up giving 8 yellow cards, one second yellow and two penalties, too much ref activity for my taste, although both penalties seemed to be warranted.

"Pizarro is an extraordinary player and a sensitive man who needed the affection of his teammates and fans," said the Coach.

"Today the side showed it was consistent and we put in a great performance."

"The decision (to play Neto) was dictated by his fitness levels, as Viviano had a hip problem. Neto proved he can be a first choice goalkeeper and has very quick reactions."

A midweek Coppa match and then a trip to Sicily for the last match before winter break. Cuadrado will be back, but no Roncaglia. Tomovic or Savic will probably take over.