After three weeks of what hasn't been the most brilliant Fiorentina side we've seen. Montella attempts to recapture that early season magic as the viola head into the Tuscan derby against Siena in Florence. With Stevan Jovetic and David Pizarro returning to the fold, Fiorentina look to be a team headed back into the upswing.

Share All sharing options for: Back to Basics: Fiorentina-Siena 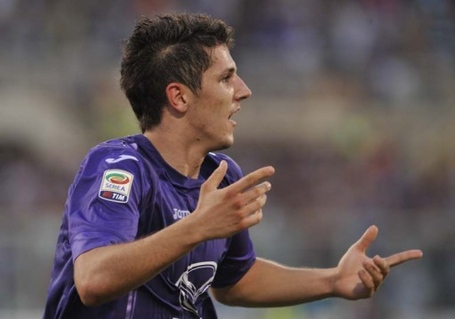 It's easy to blame a lot of factors for the last three weeks of mediocre football. Jovetic comes off with a mystery injury, Adem Ljajic falls next, and then Luca Toni takes a literal knock to the skull and misses a beat, all while questions of confidence surround Fiesole boy Viviano, and a tragic circumstance force us into going with an unpredictable and non-commiting Olivera. Yes against Torino, Sampdoria, and Roma we've taken a step back into last seasons territory and lost valuable ground. However the season is long, the players are fit, and playing Siena at the Franchi gives Fiorentina the perfect opportunity to get back into step.

Siena currently sit in dead last place with 11 points and are coming off two consecutive defeats despite having managed an impressive 2-0 win at the San Siro against Inter earlier in the season. The team has been subject to some in fighting lately, particularily when discussing the future of Ze Eduardo and the stability of the Tuscan neighbors has been rocked.

Last weeks 4-2 drubbing in Rome forced Montella into making some quick reaction changes this week, particularly in giving the under fire Viviano a break week and inserting Neto. I can't completely fault Viviano for last weeks mistakes. He's been playing all season in front of a superb defense, he's had a majority of the matches where he isn't dramatically called into action and it is possible to have lost a step in between, however he does show flashes of quality and I still believe that he can improve quite well.

Prade, Della Valle and Mario Cognini visited the squad today during their training, helping to boost their confidence before gametime. This week, Montella will have to do without Olivera and Cuadrado as he starts with Neto in goal covered by Roncaglia, Gonzalo and Savic. Cassani takes the Colombian's spot with Pasqual on the opposite end and Borja, Pizarro, and Aquilani in the middle who cover Toni, and finally a returning Jovetic from the first minute.

Serse Cosmi comes to Florence with Pegolo in goal covered by Neto, Paci, and ex viola Felipe, while Angelo, Vergassola, Bolzoni, and Rubin are behind Rosina supporting Larrondo and Calaio.

Siena have historically struggled at the Franchi but expect action especially coming from Rosina and Calaio both who are quick and decisive players. Having Jovetic back on the side is certainly the story of the week and it remains to be seen if he can capture that early season form again.