Fiorentina keep chugging away up the table, beating Atalanta 4-1 without Stevan Jovetic and achieve joint third place with Napoli, just one point behind Inter and 5 points from League leaders Juventus.

Atalanta came into the match flying high, with a three game winning streak, the most recent win against second place Inter, undefeated in 5 matches and all the way up to 6th place in the table, despite starting their campaign with a two point deduction.

Atalanta manager Stefano Colantuono put out a 4-4-1-1 in front of his goalie, Andrea Consigli. In defense was Cristian Raimondi, Guglielmo Stendardo, Thomas Manfredini and Davide Brivio. The four midfielders were
Ezequiel Schelotto, Luca Cigarini, Carlos Carmona and Giacomo Bonaventura, while Maximiliano Morales was up front behind German Denis.

Fiorentina came out of the blocks quickly, with Toni getting off a shot 2 minutes in, but it was saved. 2minutes later, Ljajic earned a free kick deep in Atalanta's zone. Pasqual took the free kick which bounced through the zone to Rodriguez who buried it in the back of the net.

After the goal, however, Fiorentina started to lay back and play a counter style game and let Atalanta come to them and it made viewers nervous.

Over the next 20 minutes, Atalanta got off 4 shots to Fiorentina's 1, one of which required Viviano's lone save of the match. Atalanta's next shot made La Viola pay.

Atalanta drove into teeh box from the right side, the cross came to Raimondi who headed the ball to Bonaventura, who clipped an oddly bouncing ball past Viviano. Replays showed Bonaventura to be offside, but the goal was allowed.

The goal seemed to snap Fiorentina out of their funk and they began the attack again, getting off 4 shots in the next five minutes and in minute 42 went back ahead. Pizarro won a free kick deep in the zone and Aquilani stepped up to take the free kick and placed it right in the corner for the score. 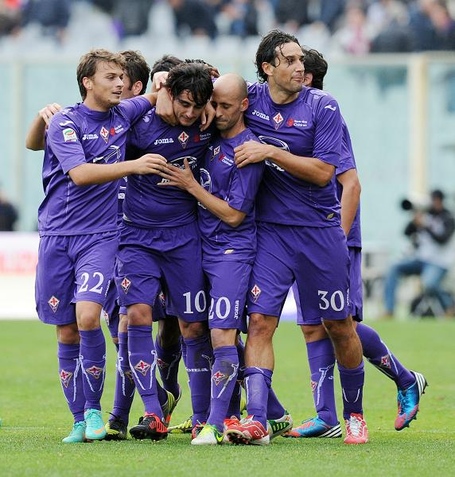 The action wasn't done for the first half as Cuadrado stepped up and intercepted a pass deep in the zone and drove to the net and was taken down from behind by Cigarini, who was issued a straight red card.

Pasqual took the free kick and put it towards the upper corner, but Consigli parried it away for a corner. Valero took the corner, sending it to Aquilani who put it in for the third goal right before the half. 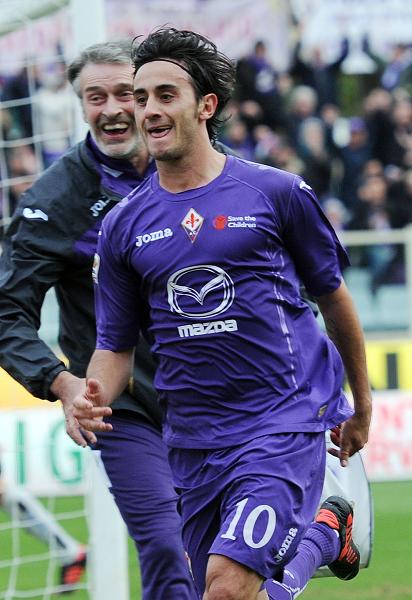 The first half ended 3-1 and with the exception of the score, possession and shots were fairly even. Fiorentina had 10 shots to Atalanta's 7, the difference being that 6 of the Viola shots were on goal while only two of Atalanta's were.

The second half was all Viola, with Fiorentina getting 13 shots to 0, but only two of those shots were on goal, including a Luca Toni header from Aquilani to add the final goal.

El Hamdaoui, Matias Fernandez and even Ahmed Hegazy made appearances, but had little impact as the game had been decided by halftime.

Viviano(6) - The lone goal was scored from an offside position, after a nearly complete breakdown by his defense and it was bouncing oddly. Not his fault. Only called on for one save.
Roncaglia(6.5) - Solid all match, played a bit more forward after the Red card. Subbed off for Hegazy ; Hegazy(NA) - Game was over by the time he got in, but it was nice to see him on the pitch.
Rodriguez(7) - Third goal of the season to start the match off right, slightly beaten on the Atalanta goal, but took over from there.
Savic(6.5) - The Atalanta scoring drive came from his side, but the whole back line was somewhat culpable on that.
Cuadrado(6.5) - Fatigue was a bit of an issue early, he began to beat his man later, causing a yellow to be given to Atalanta, and then intercepted the ball and was free on goal and had to be taken down by Cigarini, putting Fior up a man and that was all she wrote.
Aquilani(7.5) - Man of the match, two goals and an assist. Came off for Fernandez to preserve his fitness. ; Fernandez(6) - Match was virtually over when he got in, but he continued where Aquilani left off, controlling the pace and moving the ball forward.
Pizarro(7) - Once again the field general, holding possession and starting the break. Only downside is his daily yellow card. He'll miss next week. Given his ankle injury, that's probably a good thing.
Valero(7) - Other than a 15 minute span in the first half, he owned the field with Pizarro, The drive on the goal came from his side, so there was a bit of blame there, but not much.
Pasqual(7) - Got the assist on the first goal. Has become a serving animal on set pieces, but his crosses on the fly are still hit or miss, mostly miss.
Ljajic(6.5) - Only missing the finish, his ball control and possession in the first half was masterful.
Toni(7) - Got on the scoring sheet again, although he sent another chance over the goal. Earned several free kicks and worked hard. Came off after about an hour for The Hammer ; El Hamdaoui(6.5) - Had a goal called back, just a fraction off side, always looked dangerous.

Montella(7.5) - This was a match that the team could've taken lightly and they didn't. They came out with a focus and got the early goal, they laid back the next 15 minutes or so, but got back in gear and scored two more, as well as earning a red card before the half. In the second half they continued to press and put the game out of reach with a fourth goal. The team is playing well, seems to enjoy playing with each other and continues to play with focus.

"We proved that we can do without Jovetic, although obviously I prefer to have him at my disposal because he is a crucially important player."

"We already knew Alberto Aquilani’s qualities and now he is scoring regularly too, so is an added bonus for the squad."

"Are we in the running for the Scudetto? It’s wonderful to see the fans dream, but we have to continue growing gradually the way that we are. We mustn’t kid ourselves, though."

"It is good to have ambition and maintain our convictions. We are proving that we know how to interpret matches and only suffered for 10 minutes when we took our foot off the gas."

"I was glad to see that mentality of wanting the victory at all costs."

A trip to Turin to face 13th place Torino. Prior to tomorrows match at AS Roma, Torino are unbeaten in three matches, including ties on the road at Napoli and Lazio. Pizarro will miss the match, but Jovetic is likely to be back in the lineup. Fiorentina have won 5 in a row and have two wins and a tie on the road since their last loss in the league, 2-1 at Inter September 30th.