Shot at the Top: Fiorentina-Atalanta

Four games now won. Fiorentina is on a streak like we haven't seen in a long time and following a historic win against Milan at the San Siro last Sunday, Fiorentina face a potentially tricky Bergamese side with Atalanta facing the viola at the Franchi.

Share All sharing options for: Shot at the Top: Fiorentina-Atalanta 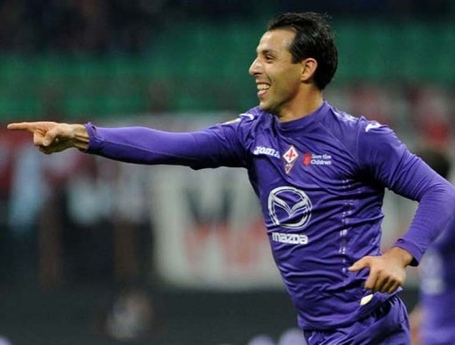 Three goals, three different players, thats all it took to solidify Fiorentina's spot at the top four slots, giving Fiorentina a rightful opportunity not only to dream of Europe, but dream of the Champions League once more. Of course the season is long and there's a ways to go, but this weekend more than any other is a perfect opportunity for Fiorentina to break away from the pack and lead their way up the charts by matching Napoli and breaking away from Lazio. It's a golden opportunity to give Montella's men some leeway as we head into the upcoming winter break.

Last weeks win in Milan gave the boys a boost in confidence in going to the international break, and a 1-0 loss to the Montreal Impact aside, there is little reason why Fiorentina shouldn't do well against a resiliant and potentially tricky Atalanta side headed by Stefano Colantuono.

Fiorentina's opportunities lie with todays matches. Lazio tied with Juventus giving Fiorentina the chance to jump up +4 from the Roman side. Napoli's last gasp draw with Milan gives extra motivation to grab the points this week which will bring the viola level on points.

Atalanta have been doing quite well as of late. The dangerous duo of Denis and Maxi Morales gifted the nerazzuri a 3-2 win over Inter last weekend and over the course of the season they've taken wins over Milan and Napoli but had moments of indecision resulting in a 5-1 home loss to Torino.

Montella looks to recuperate Jovetic however it seems unlikely that he will start but might come on in the second half. The squad looks to take the same shape that it did against Milan. Viviano will start with Roncaglia, Gonzalo, and one between Savic and Tomovic while Cuadrado, Aquilani, Pizarro, Borja and Pasqual will support Ljajic and Toni.

Colantuono's in form side includes Consigli in goal with Raimondi, Stendardo, Manfredini, and Brivio supporting Schelotto, Cigarini, Carmona, and Bonaventura behind Denis and Maxi Morales.

Atalanta's strengths are in their talented midfield of Schelotto and Cigarini while Denis is a natural poacher. Shutting down the three of them is going to be key to taking control of the midfield. A short and creative passing game like we played against Milan will serve to be the key to get into the upper half, but as always, we need to finish our shots as we have them (no Cassani style grazing the post tricks here) and provide consistent service to the strikers up front. With a crowd of 30,000 showing up tomorrow, it'll be up to the fans to provide a great and intimidating atmosphere at the fortress Franchi.