Missing injured Stevan Jovetic and facing a seemingly resurrected AC Milan squad who had scored 5 goals last week against Chievo, Fiorentina fans faced this weeks match at the San Siro with some trepidation, but fears turned to cheers as La Viola dominated the first half, scoring two goals and added a third insurance goal late to see out the Rossoneri.

Fiorentina remain in fourth place with 24 points in 12 matches, an average of 2 points per match. Last season, they had 13 points at this point and averaged 1.2 points per match for the entire season. AC Milan are 13th with 14 points.

La Viola came out flying taking the first two shots of the match within the 5 minute mark, a shot on net by Roncaglia that Abbiati saved and a shot by Ljajic that missed just a bit too high. El Shaarawy came back two minutes later with a shot from outside the box, but it was over the net.

10 minutes into the match, a long throw in from Cuadrado was headed down by Toni, and touched forward by Ljajic and Aquilani stepped right into in and put it past Abbiati for the first Fiorentina goal. 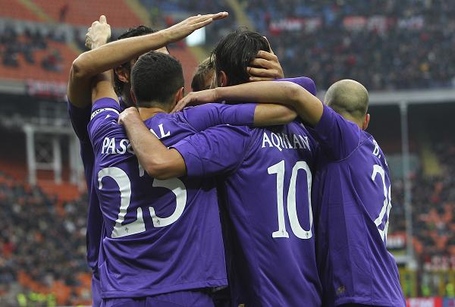 AC Milan seemed to take the goal in stride and pushed back, getting the next three shots off, an El Shaarawy miss a minute later, an Emanuelson shot blocked on the way in at minute 14 and a Boateng miss at minute 17.

Pato stepped up to the spot to take the Penalty kick but sent it over the net. 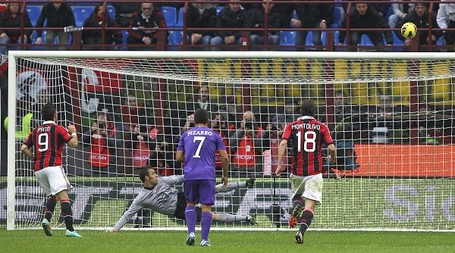 4 minutes later, Pasqual chipped in a short cross to Valero who drove the net, dribbled through three defenders and put the ball in the back of the net for the second Fiorentina goal. 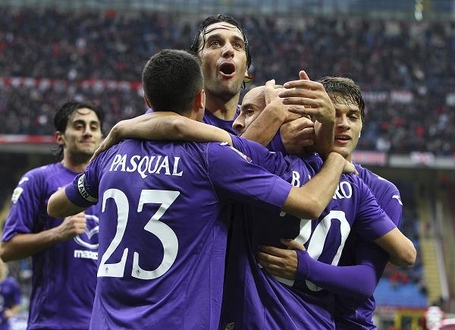 Aquilani missed a shot and Boateng had a shot blocked in the last five minutes of the half and halftime arrived with the score 2-0 Fiorentina.

Fiorentina owned possession 53% to 47%, shots were even at 5, but 3 Viola shots were on net while 0 Rossoneri shots were on net. Fouls were fairly even, with Milan having 5 to Fiorentina's 4. Fiorentina had three yellow cards assessed, however, to Milan's one. Abbiati had one save while Viviano needed none.

Allegri made two changes at halftime, bringing on Bojan Krkic for Emanuelson and former Viola Giampaolo Pazzini for Pato and these changes seemed to make an immediate effect.

Milan began the half and pushed Fiorentina back into their end and stayed there for most of the next 10 minutes. However, the only shot was made by Boateng, a miss.

Montella shuffled his deck for the first time at minute 56 and brought in Mounir El Hamdaoui for Adem Ljajic.

Three minutes later, off a corner conceded by Savic, Mexes hit the post and the rebound went straight to Pazzini who put it past an out of position Viviano to make it 2-1 Fiorentina at the one hour mark. 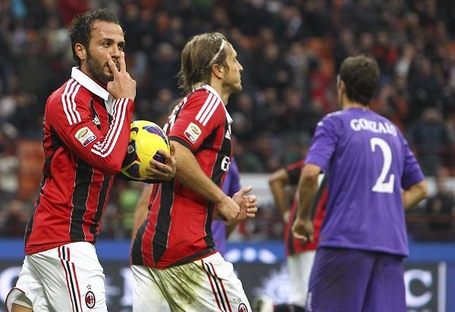 A few minutes later, Aquilani made a bad foul and earned a yellow card, so he was brought off and Matias Fernandez came on the pitch.

With Fernandez's inclusion, Fiorentina slowly began to regain some possession in midfield, something that had been severely lacking throughout the second half and by minute 69, Fernandez got off a shot that could have, and maybe, should have, been another goal, but he sent it wide.

With 15 minutes left in the match, both coaches played their last cards, with Milan bringing in Robinho for Ambrosini, who had gotten a yellow card, while Fiorentina brought in Mattia Cassani for Luca Toni.

Two minutes later, Fernandez got off another shot, but missed that one as well. Boeteng came back a few minutes later and had his shot blocked.

Fiorentina continued to hold possession and press forward, with Pizarro missing a shot and Fernandez slotting a nice ball to free up Cassani on the goalie, but he put the shot off the near post.

At minute 87, however, Juan Cuadrado, now playing on the left side, inside of Pasqual, where he had found a lot more space, fed the ball to El Hamdaoui just outside the box and The Hammer made no mistake, putting the ball in the upper right hand corner. 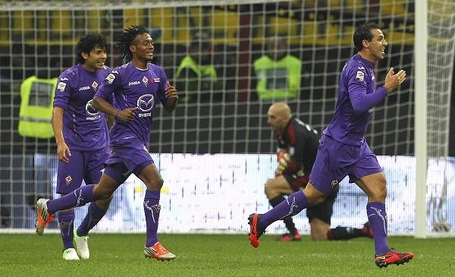 Boeteng got one more shot off, but it was a miss and the match finished 3-1.

Milan's control of the second half changed possession to their favor and the match ended with 52% possession for Milan. Milan also out shot Fiorentina 11 to 9, but only managed 1 shot on net, the Pazzini goal, while Fiorentina putting 4 four on net and scoring 3 of them.

Viviano(6) - Had no chance on the Pazzini goal due to the rebound off the pole, otherwise was not called on for a save.
Roncaglia(7) - Played strongly, had a nice shot, but right at the goalie. Given a harsh yellow on the penalty call.
Rodriguez(7) - Always strong in the center, several clearly headers and kicks in the second half.
Savic(6.5) - A little shaky early, but settled right in and held his side strongly
Cuadrado(6) - Didn't play as strongly as we've grown used to in the first half and the start of the second. With Cassani's entry into the match, he moved to the other side and looked much more like what we like to see.
Aquilani(7) - Scored his first goal of the season as calm as could be, held his position well, but faded a bit in the second half. Got a silly yellow card and was subbed off as a precaution; Fernandez(6) - Missed a shot he probably should've got on frame. The team seemed to settle down when he came in, however, adn he had a nice assist to Cassani, who plunked it off the post
Pizarro(7) - Solid in defense, held the ball like a matador and moved forward well. Got another silly yellow card, although that was more Romeo's touchiness.
Valero(7.5) - Played like a man possessed in the first half, an amazing drive and score towards the end of the half and a yellow for dissent. The second half he faded a bit, but came back after half an hour and helped to see out the match.
Pasqual(6.5) - Did pretty good from a defensive standpoint and had a lot of decent crosses in.
Ljajic(6) - Had some nice passes and a decent shot but seemed to defer to Toni a lot. Of all the players he looked to suffer for Jojo's absence the most, but nothing to hang his head over. He did get an assist on the first goal ;El Hamdaoui(6) - Looked absolutely horrible for most of the half hour plus he was in. Sat on the ball too much and dribbled into trouble, couldn't get passes correct and was a complete black hole, but then one moment of magic happened and we saw what this El Ham guy can do.
Toni(6.5) - Worked hard, nearly got a head on a ball that would've surely gone in, ran all match, subbed late for defensive purposes ;Cassani(6) - Came in and helped to settle down the squad and see out the match, nealry scored as well.

Montella(7.5) - The starting lineup was great and dominated the first half. The squad came out somewhat timid in the second half, however, but all three of his substitutions cleared that up and turned the tables back in Fior's favor. The team is playing well, is in fourth place and has an easier string of matches coming up. Will need to keep his team focused as to not allow distraction to creep in.

"I am satisfied, as this was a great day for us and the supporters considering the way it developed and the responses given by the team."

"These are three deserved points, even if we were a little lucky in the final minutes. I really liked the way we played, because the team showed it understood each moment of the match."

"We might’ve been a little less spectacular and a little more clinical compared to the start of the season, but still could have finished it off earlier."

"We are invaded by the enthusiasm of the fans. It is pleasing that the supporters and players are dreaming, but we have to transform all that into positive energy so we can keep on going."

"It’s true that third place is close by, but so is fifth… The Viola are showing what they can do and what they want to achieve."

"I will admit that I was tempted to introduce Giulio Migliaccio rather than Mati Fernandez when we were 2-1 up, but the DNA of this team is creativity."

"Fiorentina played well and kept possession, but we gifted them two goals from throw-ins. We did not react well and that is unacceptable.

"The Viola ran hard and pressed us around the field, but we were too deep and feel regret because they didn’t really have many chances aside from the ones we gave them.

"It was a fairly balanced encounter. Fiorentina kept possession, but it is chances that count in football."

"Pato had done well on Tuesday, so I thought he would grow and improve by playing more. The problem is that our style of football needs us to run at full speed and playing every three days we can’t do that.

"Sometimes we have to play badly and try to get a result anyway. We ought to avoid the slips in concentration.

"It’s a shame about the results, as we could’ve gone up to sixth place today and did not manage it."

Fiorentina head back to the Franchi to face Atalanta who have not lost in 5 matches and sit at 6th place in the league. Before beating Inter 3-2 this week, Atalanta have beaten Sampdoria away, Napoli at home, tied at Pescara and won at home against Siena. Fiorentina are flying high, winning four in a row and look to continue the trend the next three weeks as they have a run of very winnable matches.