Fiorentina head off to the San Siro on the heels of a three game winning streak to take on an uneasy Milanese side featuring former longtime teammate and captain Riccardo Montolivo. 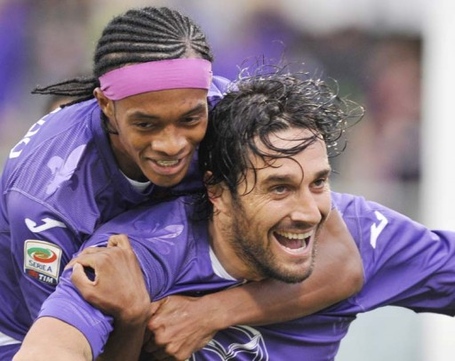 After a rousing 4-1 win over Cagliari at the Franchi last weekend and coming off a three game winning streak, Fiorentina are on fire as they head into a showdown at the San Siro against AC Milan and former viola captain Riccardo Montolivo.

There's a fervor and optimism about the match despite losing our talisman Stevan Jovetic to a knee injury for ten days, but it looks like Luca Toni, who has surprised and silenced his critics with three goals in seven matches will take the starting berth alongside Adem Ljajic.

Milan who have been struggling all season thus far had a welcome respite as they routed Chievo 5-1 last weekend but were brought back to Earth in a 1-1 draw with Malaga in their Champions League match in midweek. Their main attacking threat comes from Stephan El Shaarawy with eight goals in eleven matches and one of the only reasons why Milan haven't hit rock bottom yet. With a win over Milan on Sunday and several matches going in our favor, Fiorentina who lie in fourth could be ready to launch into the top three spots.

Last week Montella rested several key players including Manuel Pasqual and Nenad Tomovic, and has instituted a healthy squad rotation which sees players see different levels of action against different teams depending on the tactical necessity of the squad. This week sees Montella returning to classic form even sans Jovetic. Tomovic returns alongside Gonzalo and Roncaglia while Cuadrado and Pasqual will be on the wings of the dream trio: Aquilani, Borja Valero, and Pizarro while Ljajic will partner Toni up front. Former Milan man Aquilani will add a more in depth attacking flair to Borja and Pizarros passing game, and his crossing will be a major asset.

Allegri, who knows any false step now could be the axe, has Abbiati starting in behind De Sciglio, Bonera, Yepes, and Constant, while Ambrosini and Montolivo cover Emanuelson, Bojan and El Shaarawy behind single point and frequent viola scorer, Pato.

The idea for the game would be to crowd the midfield, cut off El Sharaawy and then spew a series of comments towards Montolivo indicating that he will forever, no matter what, look like a little girl. After Montolivo is predictably lying in a fetal position in midfield, Aquilani can take the opportunity to move in to the side on the heels of through balls from Pizarro and Borja.

If we were able to beat Milan at the San Siro last season with the likes of Amauri, there's no reason we can't come out with a positive result tomorrow!