Movin' On Up: Fiorentina 1, Bologna 0

Share All sharing options for: Movin' On Up: Fiorentina 1, Bologna 0 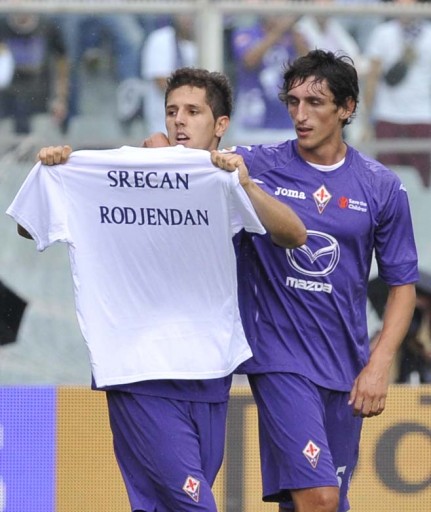 A clever Jovetic flick seals the win for Fiorentina as they defeat the ex-squad 1-0 and go into the international break on a high.

With a well pieced together midfield, a functioning JoJo, and a disputable offside Tonigol, Fiorentina took home the three points which sees them return to fifth place in pure Europa League positioning. Montella made up for the absence of Pizarro with a well rotated midfield while Toni made a surprise start from the first minute and we saw him in a form that we haven't seen in the last few weeks before giving way to the returning El Hamdaoui. The defense, marking the debut of Savic replacing Gonzalo, kept the Diamanti-Gilardino duo quiet, while Viviano was without work a majority of the game before making a spectacular acrobatic save on a Diamanti missile.

Fiorentina came roaring out of the gates as soon as the third minute when Borja Valero fired directly at Agliardi. But the positive play came out in only the seventh minute when a Mati corner flew to Tomovic who lobbed it over for JoJo to flick it into the net. JoJo scored his fifth goal of the season and celebrated holding a shirt dedicated to his sister's birthday. Fiorentina had to defend against Diamanti, at the moment, Bologna's only true working player. At the 14th minute Mati put Agliardi into a diving save while four minutes later Garics found Kone who just barely missed his opportunity to spin the ball around. At the twenty minute mark, Toni found JoJo who rushed the keeper alone but misjudging the shot made it fly well above the bar. The true star of the first half however was Borja Valero, who classily dribbled and spun around the Bologna midfield moving the ball forward constantly. Fiorentina were under the spell of Orsato all throughout the first half who was quite trigger happy on yellow cards, putting a few questionable calls against the viola players. At the other end Savic made an impression with a series of well timed sliding tackles which gave Viviano a break from his work. However Viviano was called into his only true save of the day when Diamanti rocketed a ball from 30 meters for Viviano to acrobatically put into the corner.

Fiorentina kept their momentum into the second half and despite questionable challenges from Natali who had already been earlier booked, Toni found a rebound from a Pasqual cross and nodded it in only to be judged slightly offside. Just a minute later, Borja was once again on the scene as he shot a cross to Toni who was only milliseconds slower than Agliardi who dove to take it into his hands. Agliardi was put to service several more times as he had to cover one corner after another and nearly suffered an own goal by Garics. Toni came off for El Hamdaoui's return who made himself known immediately, putting pressure on Bologna's defense with several turns and dribbles. Borja was once again a terror the entire half, forcing Taider to dangerously back pass too close to Agliardi's line. He also faced attacks from Cuadrado forcing it into a viola corner and El Hamdaoui grazing the top of the box. After three minutes of Fiorentina pressing, Orsato called time and gave Fiorentina and the nun-high fiving Della Valle the three points.

Viviano - 6.5 - He's finally turning into the Viviano we knew before, shows confidence and owns his area. Spectacular save on Diamanti in the 20th minute.

Roncaglia - 6.5 - The myth and the legend continues this week as he absolutely terrifies the Bologna offense into giving up the ball. Reports of him summoning lightning on his opponents has been yet unconfirmed.

Tomovic - 6.5 - I want so bad to give him a 7 save for the one on one missed opportunity at the end. He shows true authority in the back and commands the center defense with grace.

Savic - 6 - Shows personality and class on his debut against Diamanti, it'll be interesting to see how he grows.

Cassani - 6 - Played a generous but not quite physical game. Assists Toni a couple times but doesn't look to be quite starting material just yet.

Mati - 7 - One dangerous corner after another, free kicks that challenge Agliardi, and some sublime runs in the midfield, he's definitely up for starting and nearly made up for Pizarro's absence.

Olivera - 6.5 - It's shocking that he made an appearance today, even more shocking that he wasn't half bad. Great interception duties and was even able to take back the ball several times, his best game in purple.

Migliaccio - 6 - Decent game to waste time, maybe a bit too physical, picked up a needless yellow against Gilardino.

Borja Valero - 7.5 - A midfield virtuoso performance that was almost it's weight in goals. He leaps, spins, and trounces his opponents and sends one scintillating through ball after another. His only fault was misjudging a gift from the Bologna defense but he's the midfield leader and he gets the team moving. Fantastic.

Pasqual - 6.5 - Pasqual to Toni was like a time machine to 2005 again. He was instrumental in Toni's controversial offside goal, and forced Agliardi into a save. The wing seems to suit him.

JoJo - 7 - JoJo has been a bit of a polarizing figure lately. On one hand, he is scoring, netting his fifth goal of the season this year, on the other hand however, he's playing a bit too much on the egotistical side lately. He's driving balls from beyond the line because he can, but if Toni is just behind, why not draw out some attackers, pass the ball, and let him take care of it. Lately his long balls are a byproduct of the Kuzmanovic school of shooting, and although the occasional missile fires straight into the top corner attracting goal of the week crowds and Russian billionares, there's no harm in being an assist man or allowing yourself a tap in. So great game today but dude, think things through a tad bit.

Toni - 7 - The surprise starter of today, finishes off others work and gets a drive of his own which may or may not have been offside.

El Hamdaoui - 6.5 - In his short cameo he spins and dribbles like Borja and just nearly grazes the top post. He has a mad wanting to get back in the game and it shows.

Montella - 7 - In light of losing Pizarro and Gonzalo and not having Aquilani he gambles on Toni from the first minute, Olivera, and Savic. He reads the game well and knows where to turn from a defensive stance to an offensive one with the introduction of Cuadrado and El Hamdaoui. Got the three points and brings us positively into the international break.

No games this week as everyone goes on international break but we're back in two weeks (hopefully on Violanation) to face Chievo in Verona.

Facundo's Fact of the Day They tried to give Facundo the Ballon D'or. He took the ball, bounced it against his chest, and launched it into the top corner.