This Is The Place: Chievo-Fiorentina

Share All sharing options for: This Is The Place: Chievo-Fiorentina 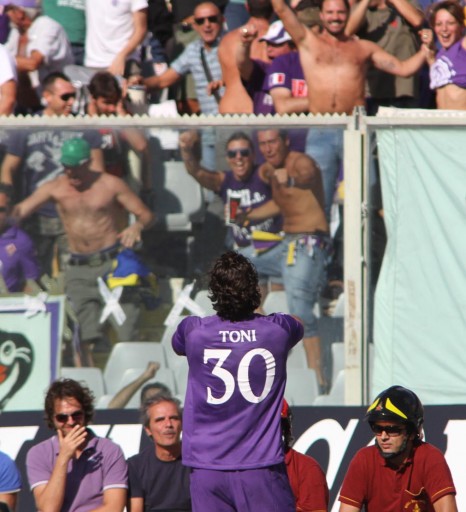 Chievo. It's the team that never quits. Chievo was the one of the many banes of Fiorentina's season last year. It was this match where Mihajlovic lost his job, it was the return leg in Florence that put Delio Rossi in hot water with the Fiesole faithful, and now the reborn viola return to Romeo and Juliet's city to retake the Bentigodi.

If there was ever a prize for Serie A's most celebrated underdog, Chievo would reach high for it. A team that has always been a midtable mainstay and who famously were thrust into the 2006 Champions League qualifiers, they always seem to border between lower table frustrations or mid to high table achievers. Chievo, as small a team as you want to call them, mean business, and they show it every time we play them. Last year Chievo managed to defeat Fiorentina home and away. A 2-0 win in Verona followed by a 2-1 win in Florence were the final straw for one manager, and the fatal blow to another. They currently sit four points above the drop zone after seeing off high flying Sampdoria last weekend at home, but have shown inconsistencies falling to Inter and Lazio despite solid showings.

Fiorentina returned to winning form last weekend, seeing off Bologna 1-0 thanks to JoJo and an ace solid defense, but is still showing struggles up front in finishing. They managed to hold off Gilardino and Diamanti and have reduced Viviano to little more than a spectator for most of the game. Even without Gonzalo and Pizarro, Fiorentina's depth held firm the entire 90 minutes. Chievo is in no means the "test of the season" but again, these are the games that we needed to win that we were suffering in last season, so a great impression as well as goals are crucial to team morale.

With all the players back from international duty and no major injuries to report, Montella looks like he has a semi full roster to select from (minus Aquilani who is still in the last phases of his recovery) One of the biggest surprises tomorrow is the starting of Luca Toni over El Hamdaoui, as Luca has shown to be a solid addition to the starting outfit. Toni will pair up with JoJo supported by Cassani, Pasqual, Romulo, Pizarro, and Borja. Gonzalo returns to a toss up between Tomovic and Savic as well as Fiorentina's resident mean machine Facundo backing up Viviano.

Chievo come out at home with Sorrentino supported by ex viola captain Dainelli, Frey Jr., Drame and Andreoli. Guana, Rigoni, and Hetmaj, are behind Stoian and Di Michele who will cover Thereau. Pelissier, coming out of a recent recovery will start from the bench as well as Luciano.

So where is Chievo's strong points? One is Sorrentino who i've always highly regarded as even ready for a big team, he's a fantastic keeper. Di Michele has always been set his eyes on Fiorentina and was a mess for us when he played with Lecce. Thereau is a good scorer but not as good as Pelissier or Luciano, so their exclusion for most of the match gives us a head start to score early.

Speaking of scoring, we need to score more often. Seeing Roncaglia and Romulo scoring gave us a bit of hope, but JoJo might I say has been a little off even despite his five goals, and Toni although strong and showing great game in the last few matches can't be alone. JoJo needs to be more of a team player, stop trying to take every shot from outside the area, and pass the ball when he can. With luck we'd never have to see the same situation that we've faced with one Adem Ljajic.

The Benegodi is no easy place, but Fiorentina are not the same team. It's time to take three points and solidify our place in the upper reaches of the table.

Facundo Fun Fact of the Day: Viviano once asked Roncaglia to "take care of the offense" for him - the bodies still haven't been located.