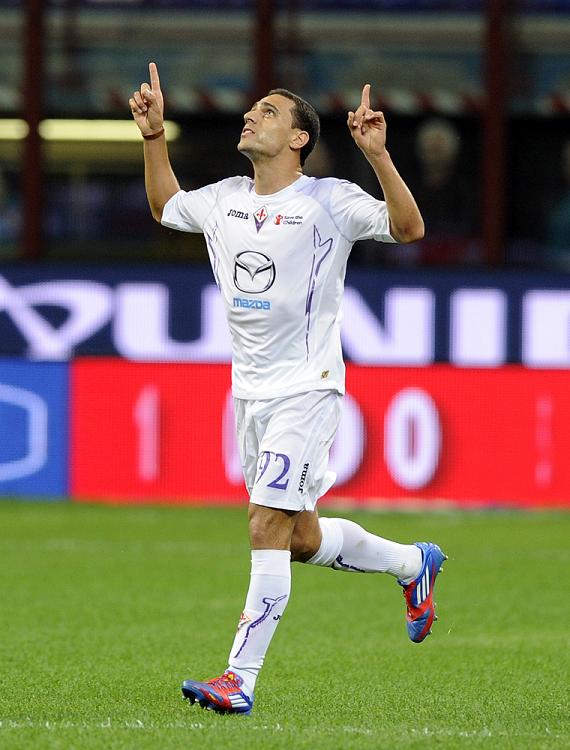 Romulo with a goal to give Viola fans hope, but it was not enough.

Well we've seen this before, and it's starting to look like a theme: Tons of Fiorentina possession and very little finishing.

Make it 11 straight trips to play Inter in Milan and 11 straight losses. Fiorentina had chances, but wasted all but one, while leaving their backs wide open to put stress on the defense and teams like Inter are more than glad to take advantage.

While scrambling, Gonzalo Rodriguez, put his arm into a ball in the box and Facundo Roncaglia left Antonio Cassano wide open for a one on one on Emiliano Viviano for the second and winning goal. Romulo managed to get a goal back before halftime, but Rodriguez made a silly tackle to get his second yellow and that was the match.

Fiorentina still managed to own possession for much of the rest of the match, but were never a threat after that.

The match ended with Inter leading in shots 15 to 14, with 6 on to Fior's 5. Inter were called for 19 fouls to La Viola's 15, but Fior were assessed 5 yellow cards, plus a red card for a second yellow, while Inter had 4 yellow cards. Fiorentina lead in possesion with 57% and had 10 corners to Inter's 7.

Report Cards
Viviano(6) - Made four saves, one or two which were great ones. Unable to create a miracle on the PK. Cassano's goal not his fault.
Roncaglia(5.5) - Perhaps a bit too committed to offense, nowhere to be seen on Cassano's goal
Rodriguez(4.5) - Ejected with two yellow cards. Puts his arm into the ball to give up the penalty (there are those who will argue he was two feet away and the ball played him rather than he playing the ball, but he raised his arm) and is nowhere to be seen on Milito's shot off the crossbar. Horribly stupid and unnecessary tackle on Nagatomo gets him tossed from the game and ends any chance of a point. He'll miss the next match and will be on his final warning for his next card.
Tomovic(6) - nearly lets an attacker past him for a one on one, but he recovers. All in all a bad day for the Fior defenders
Cuadrado(5.5) - met his match in Nagatomo, was neutralized for much of the match. Had a chance with Pasqual but couldn't get the pass right. Maybe a bit tired on a short turnaround. Subbed for Luca Toni at min 70; Toni(NA) - No effect, his big highlight was a shoving match.
Romulo(6.5) - One of the few positives in this match. Got the goal and had some great runs. Interacted well with Ljajic.
Pizarro(6.5) - The other positive in the match. Got the assist and nearly freed up Jovetic.
Valero(5.5) - Either he was up against tougher opposition or he was tired but today was a large step backwards for Valero. Gave up two or three balls that lead directly to Inter charges Subbed for Migliaccio late; Migliaccio(NA)
Pasqual(6) - Decent and hard working. took a free kick deep in Inter's zone and kicked it straight into the wall for some frustration for the writer.had a few good crosses but the weak Fiorentina offense could do nothing with it.
Ljajic(5) - He's just a fart: all wind and no result. This team needs a striker. Subbed for Fernandez at half time; Fernandez(5.5) - Not really the answer, had some nice runs and some nice passes but isn't a scorer and was obviously out of position. Once Fior went down a man, he had to cover the midfield.
Jovetic(5.5) - He looked tired and over matched. never dangerous.

Montella(6) - Had a good game plan, the team owned possession again but no one on this team wants to step up and put the damn ball in the back of the goal. Rodriguez getting tossed basically ended it for all intents and purposes. He'll have to
get this team back on the practice field, see who'll anchor the defense the next match and find out if anyone on this squad wants to be the scorer.

Quotes
Vincenzo Montella:
“The team did not do badly, even if there were more mistakes than usual. We always took the initiative, even after going down to 10 men. Unfortunately we don’t finish chances off well and all our possession doesn’t lead to that many shots on goal. It is important that we always take the game to our opponents, but we must also learn to be more effective in front of goal. On the other hand, Inter were very practical, but that was no surprise. We could’ve done something more and this match has to serve as a lesson for the future. There’s a long way to go and a lot of work to be done, but there are some promising signs. We are missing Alberto Aquilani in midfield, as he can give us something more there. We do need a player who can score. We’ve got players who could do that and are working on them to improve these skills.”

Yellow Card Situation
Disqualification of one game after the 4th, 8th, 12th, 15th and the 17th yellow card.
Past 17, every yellow card is equivalent to a one-match ban.

Looking Ahead
Fiorentina come back to the Franchi in 7th place and play 12th place Bologna. Fans will need a good performance to take the bad taste out of their mouth from this last match. Rodriguez will be disqualified, so it might be the debut of Ahmed Hegazy, or perhaps Roncaglia will move over and Savic might make his first appearance.