Novara 0-3 Fior; The Kids Are Alright

Share All sharing options for: Novara 0-3 Fior; The Kids Are Alright 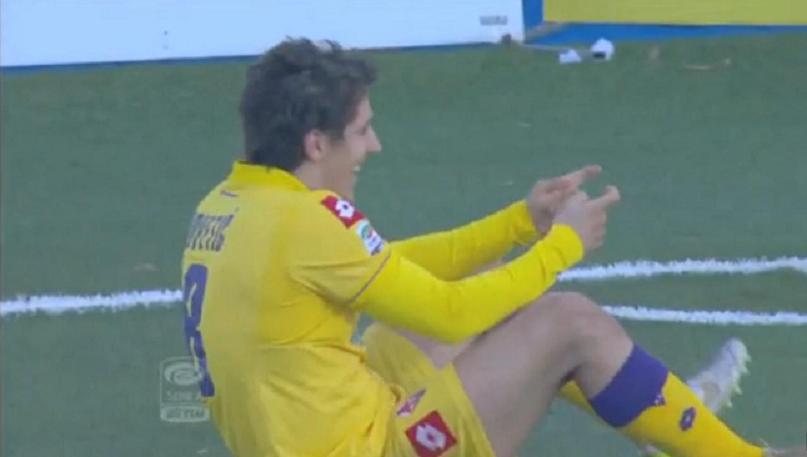 Stevan Jovetic celebrates his second goal, Nastasic came over later to join him.

Facing a new year, with a new coach, a new formation, with no strikers as Alberto Gilardino was sent to Genoa and Babacar and Silva were not available, on the road, where they had been win-less since April, with the relegation zone in sight, Stevan Jovetic and his Fiorentina boys went out and dominated play, winning 3-0 against lowly Novara Calcio at the Stadio Silvio Piola.

Recap
Fiorentina played with 3 men in front of Goalie Artur Boruc, Allesio Gamberini, Cesere Natali and Matija Nastasic and a 5 man midfield, Mattia Cassani back from injury played out right, with Valon Behrami next to him, Riccardo Montolivo in the middle with Amidu Salifu and Juan Manuel Vargas out right. Stevan Jovetic and newly inserted Adem Ljajic played forward.

The opening 20 minutes was a bit rusty for both sides, but a nice pass from Ljajic, sprung Jovetic free and the Novara defender had to drag him down in the box. Jovetic finished the PK for his 8th goal of the season.

Shortly before half, Juan Manuel Vargas let go a long pass that released Riccardo Montolivo who collected the ball and took it into the box, cut back and lost the defender and looped it over the top of the goalie who had charged him and it just brushed the inside of the pole and dropped in.

Shortly after halftime, Ljajic struck a laser to Jovetic who volleyed it in for the 3rd goal and the rout was on. In a, perhaps, not so subtle jibe at previous coach Sinisa Mihajlovic, Jovetic celebrated by pretending to play video games. Mihajlovic had been quoted as saying some young players, Adem Ljajic for one, "Like to eat too much choccolate and play too many video games."

The win, combined with other results put La Viola into 9th place with 21 points while Novara stayed at 18th.

If you subscribe to the theory that 40 points is, more or less, the accepted "target for safety," (ie: Teams with 40 points are not likely to be relegated,) then Fiorentina have reached the halfway mark to that target with two league matches left until the official halfway mark.

Report Cards
Boruc-(6) nice easy afternoon for Artur, no shots on, no real shaky moments and another clean sheet
Gamberini-(6) played well in his new role, had to give up a few too many corner kicks for my taste, but i think that will get better.
Natali-(6) looked fresh off the holiday, played his role well.
Nastasic-(7) very nice intervention to save a one on one situation, got a yellow, but is looking to be a fixture for quite some time
Cassani-(7) owned the right side for large stretches of the match, collapsed back when Fior were countered on, this squad missed him. subbed for LDS late,
Behrami-(6) I think this new system might free up Valon a bit too, i get the impression he's not 100% fit
Montolivo-(7) first half the midfield was a bit crowded, but vargas held back a bit and let rikita move forward and it made the difference. pretty goal, some nice passes.
Salifu-(6) Tried a bit too hard at times, but the effort was great. got cramps in the second half, Kharja subbed on
Vargas-(6) pressed forward early, played back more often later to let montolivo come forward, got the assist on montolivo's goal.
Ljajic-(7) like the rest of the team, he took a while to warm up, but his service set up the Penalty for Jovetic and he had a very nice cross on Jovetic's second, some nice give and go action, too. subbed for Lazzari, i think for resting purposes.
Jovetic-(8) jojo is looking more dangerous every time he touches the ball.

Rossi-(7) The new system worked, this time, against a bottom table team, but it remains to be seen how it will hold up against the stronger teams and the mid table teams that have individual studs, but all that being said, it was on the road, and getting that road win early is huge for morale.

Coach's Quotes
Delio Rossi is “very happy” with Fiorentina’s victory and their adoption of the new 3-5-2 tactical system.

“We knew this was a delicate encounter for us and wanted to start 2012 on the right foot,”

“We stepped on to the field with this new 3-5-2, which we worked very hard on during the winter break, and I am very happy with how it went.”

“It was a delicate game with a new tactical system. We were rewarded for our hard work and the lads deserved this result.”

“We do not need static centre-forwards. We need players who are good at movement on and off the ball,” continued Rossi.

“Of course it’s always difficult to find good players in the January transfer market, but the club know what we are looking for.”

Looking Ahead
At Roma for the Coppa Italia Wednesday afternoon.

Remains to be seen how seriously either squad take this. One would think it means more to Fior. as it could be the only road to Europe.

Roma are 7th in Serie A and have an away trip to 8th place Catania 3 days later, while Fior host relegation threatened Lecce.