Share All sharing options for: Fior 2-1 Siena; Wind Of Change 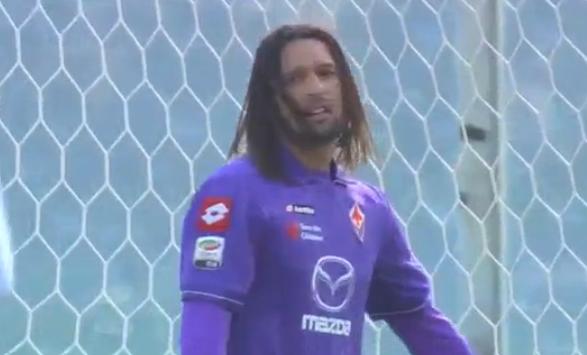 Newcomer Amauri made an immediate impact in a 2-1 victory.

A wind blew through Firenze this week, bringing with it a new striker force as Brazilian-born Italian Amarui was bought from Juventus for the rest of the season and out of favor Ajax striker, Mounir El Hamdaoui was brought in as well.

The change was felt immediately as Fiorentina came out with passion, playing harder for more of the match than can be remembered in recent memory. Stevan Jovetic scored early and Cesere Natali put another home to seal a 2-1 victory, the first at Stadio Artemio Franchi since December 4th of last year.

Amauri himself had several chances to score, but Siena's goalie stopped him on a nice bicycle kick and on another shot he struck, admittedly, straight at the goalie.

It wasn't all gelato and cream for the Viola, however, as Matija Nastasic was called for a handball late to give up a penalty kick and cut the lead to one goal. The one goal difference made an earlier call by Ref Bergonzi much larger as he declined to give a penalty kick to Siena when it appeared as if Manuel Pasqual had stepped on a Siena players foot in the box, but the ref gave a yellow for embellishment instead.

The win raised Fiorentina from 14th to 10th place, 9 points from relegation and 10 points from European Competition.
Hi Lights

Report Cards
Boruc - (6.5) Three saves, one of them of the spectacular variety. Guessed right on the PK, but had no chance.
Gamberini - (6.5) solid, never challenged.
Natali - (7) won all his headers, including one from Amauri to score a well deserved goal.
Nastasic - (6) Other than the handball had an excellent match. one small play in particular stands out for me, instead of wildly heading a cross anywhere, like we're used to, he aimed his header between two defenders up field and put it out of bounds exactly where he wanted it to go. calm, cool and unperturbed.
Behrami - (7) Animale. he was everywhere on the pitch. Thank the fat ninja for this guy.
Lazzari - (5.5) the fat man giveth and the fat man taketh away. This guy's a goat, couldn't make a header from 2 yards out with only the goalie on him. Hopefully Kharja will come back from Africa with a different mindset and take this dood's playing time away or perhaps another reinforcement.
Cassani - (6) Looked a lot more comfortable today than the last two matches, could also be because he's regaining his fitness.
Montolivo - (6.5) Actually gave what might have been his best effort of the season. he wasn't good early, but he was trying and he managed to get into the flow of the game. He took corner kicks and most of them were dangerous, got the assist on the second goal.
Pasqual - (6.5) Much better than Vargas, some good crosses, some bad, but generally a good effort. might have committed a foul in the box, bergonazi said no.
Jovetic - (7.5) nice trademark strike early, got just a bit more space and made Siena pay. just a bit off in his timing with Buddy Jesus, could be a sweet relationship.
Amauri - (7) determined. should have had a goal or three, but you can really see he knows where the net is. got a bit tired towards the end, but that's understandable.

Rossi - (7) didn't waste anytime getting the new guy in. Immediately had a game plan and it worked. I like this guy.

Coaches Quotes
“It was crucial to win today, although we have to improve the distances between areas of the team. We need to be less frenetic,” said the Coach.

“Amauri was coming off a long period of inactivity, but he is a great player and the mind can push on the legs even when they aren’t in peak condition.

“This morning I made the decision along with Amauri for him to start the game. Will he play against Bologna midweek? We’ll see.

“Fiorentina changed to a 3-5-2 system because I think it is better suited to the players at my disposal. I’m happy with the result, although of course we have to improve.”

Looking Ahead
Midweek match Wednesday at Bologna followed up by Udinese at the Franchi on Sunday. Fitness will probably be an issue for Amauri, maybe El Hamdaoui gets a shot, although there won't be much practice time for him.

The Winter market closes Tuesday, so there is still a chance for more action, both coming and maybe even going, with Cerci most likely to hit the road.