Share All sharing options for: Cag 0-0 Fior; Take The Money And Run 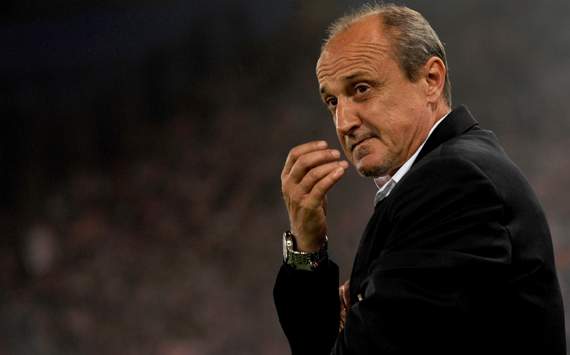 Without his star, Stevan Jovetic, or any other forwards, for that matter, Delio Rossi will gladly take his one point and get back home.

The signs were all there: Today was going to be a very bad day for Fiorentina.

Without Alessio Cerci, left off the roster because Delio Rossi felt he was distracted by the winter transfer market, without Stevan Jovetic, left off the squad as a precaution, so as not to aggravate a sore thigh muscle, being blocked from the stadium by striking Alcoa workers and having the match delayed a half an hour, with a mostly empty stadium and with an official, Gervasoni, who is notorious for erratic calls and letting matches get away, it appeared Fiorentina had no chance whatsoever.

Somehow though, through a combination, perhaps, of good defense and bad Cagliari offense, Fiorentina managed a point at nearly condemned Stadio San Elia, allowing only Palermo to pass them in the standings this week.

With this match being the end of the first half of the season, Fiorentina have 22 points, one point less than last seasons Sinisa Mihajlovic squad and are in 14th place, seven pts from relegation and ten points from 5th place.

Report Cards
(NOTE: I missed over half an hour of the first half, so these are based mostly on second half performances and from what I'm reading on the internet)
Boruc - (6) 3 saves, one with his shin early. not really a tough outing for Artur
Gamberini - (6.5) per firenzeviola.it "A Flawless Performance.
Natali - (6) won a lot of headers, only recall seeing him get beat once.
Nastasic - (6) got a yellow on a call i thought could've gone either way at the edge of the box, but was perfect every time else.
Cassani - (5) I'm still not convinced that the midfield is his role. It might be the lack of viable alternatives that keeps him there, but I think a back line of Mattia, Gamberini and Nastasic would be better.
Behrami - (7) Other than the brief appearance by Acosty, he was the guy most easy to watch. He just tries so hard. got into it late after Gervesoni lost control and got a yellow
Salifu - got a yellow early and had to be subbed early in the first half, either for a knock or to stop him from getting a second yellow. he's still rough, it totally doesn't help him that he's next to a black hole named Montolivo.Subbed for Munari(injury); Munari coming in signaled that 0-0 was most likely going to be the final result.
Montolivo - (5) one stretch of the second half, four straight turnovers. he got a 6 from one site because "he tried" I'm just so done with this dood.
Pasqual - (5.5) Typical Pasqual effort, lots of up and down and back and forth, one or two good crosses and one or two real bad crosses, but all in all, more positive than the rest of the midfield, sans Behrami. Subbed for Vargas late for an injury; Vargas - didn't make any impact really.
Lazzari - (5.5) actually didn't play as bad as last week, tried really hard, but way out of position and no help to, or for, anyone else. panic
Ljajic - (5) gave a lot of effort, but had no answers.Subbed for Acosty(tactical); Acosty - (6.5) stepped onto the field like he owned it, drove at a double team and didn't give up the ball (that's a big deal with this squad that can't hold the ball to save their lives)

Rossi - (6) On the road, with every conceivable distraction and got the point and even more important, a 100% effort from all the players for the whole match. a small victory, but the team needs to follow this effort up next week with an even greater effort. I would not be surprised to see the Franchi empty again and i would not be surprised to see what crowd is there turn against the team early, if the effort is not there.

Coaches Quotes
“It was a strange game, especially with that late start, but it was a civil protest from 500 people who are losing everything. I hope our presence can be a spotlight to let their story be heard,” said the Coach.

“It wasn’t a brilliant performance and the 0-0 result is right, even if there were some encouraging signs in terms of our hunger to win.

“We’ve got to improve our style of football and try to be more efficient in attack.

“Cerci is a wide attacker with certain characteristics, so he has been penalised by our change to a 3-5-2 system. If he gets the chance, it’s best he go express himself elsewhere, otherwise he’ll have to stay in Florence and try to adapt.”

However, Rossi was far harsher when asked about the Juventus bid for Behrami.

“I think the club needs to take steps in order to improve the squad and not sell one of the most positive players. We need those who fit the project that I am trying to build with the club.”

Looking Ahead
Siena come to the Franchi Sunday, (EARLY match Sunday morning, 6:30am Eastern) then a midweek tussle at Bologna Wednesday before Udinese comes to town the following Sunday.

Jovetic should be back, and who knows, maybe a replacement will show up. Munari will be disqualified for yellow card accumulation and Natali, Behrami, Lazzari and Cassani will be on their final warnings.