Midpoint of the Season: Cagliari-Fiorentina

Share All sharing options for: Midpoint of the Season: Cagliari-Fiorentina 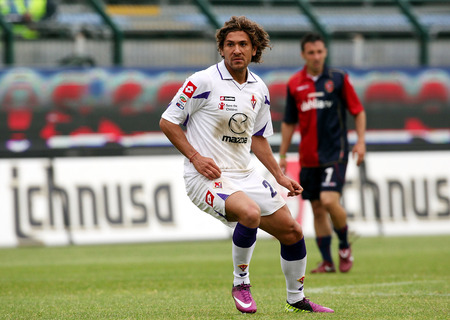 Fiorentina are off to the luscious island of Sardinia to face a resolute Cagliari side.

After yet another disappointing result last week against Lecce, a still incomplete viola side fly to Sardinia to face a Cagliari that is more than capable of surprising results when needed. The viola fell at the Franchi last weekend to a Lecce penalty while Cagliari held off Juventus in a ridiculously controversial 1-1 draw.

Fiorentina's week on the mercato saw El Tanque return to Argentina to ply his trade with Boca Junior, while they anxiously await Amauri, who is remaining in Turin for the moment with his pregnant wife but should hopefully sign and be available for next weeks Franchi game with Siena. Fiorentina are also chasing David Pizarro from Roma while deciding on the future of Alessio Cerci who was not called up this week on possibly in part of his raving lunatic girlfriend attacking viola fans and wild twitter account, and a late bid for Vargas to scrounge extra cash for summer buys. Corvino and Rossi both gave press conferences to say that they are frustrated with the winter crop and are eagerly awaiting June, but Rossi called for the viola faithful to keep their trust in the team.

Despite a late knock, JoJo looks set to feature tomorrow as scheduled, and Rossi has also surprisingly called up Acosty from the Primavera to fill in for Cerci. Rossi confirms the 3-5-2 with Boruc, Nastasic, Natali and Gamberini behind Vargas, Behrami, Salifu, Montolivo, and Cassani behind Ljajic and Jovetic. 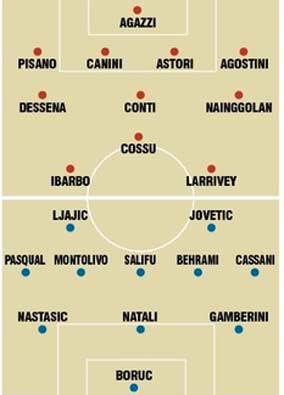 Rossi shows up with the same team he faced against Lecce. The 3-5-2 gives more dynamism to the team but we need to stop getting bogged down when we're overly covered by their defense. Dangers to watch this week include Cossu, Conti, and the highly rated Nainggolan.