Share All sharing options for: Fior 0-1 Lecce; Burn Down The Mission If We're Gonna Stay Alive... 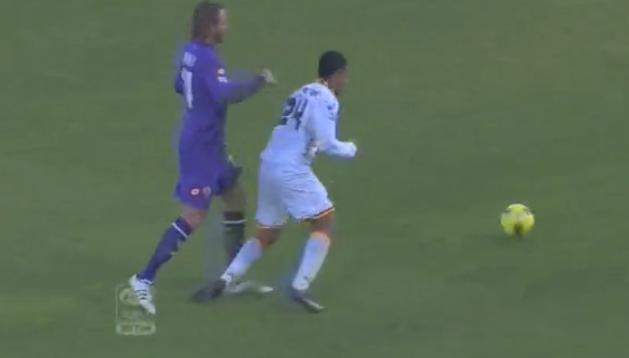 Fiorentina's House of Cards was once again exposed for all the world to see with another haphazard, lack-luster effort by the bulk of the squad in a horrible loss 1-0 to bottom dwelling Lecce at the Franchi and left fans wondering if tearing it all down might not be the answer. 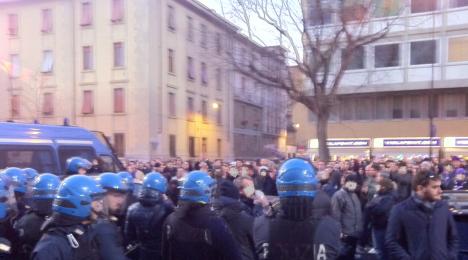 "behind four walls stone the rich man sleeps, it's time we put the flame torch to their keep..."

Several hundred Viola Tifosi protested at the Franchi after the match, clearly unhappy at the effort, or lack thereof. Singing anti player and management chants, the fans called on the Delle Valle's to spend money and the players to get to work. The protest got out of hand as fans tried to break into the locker rooms and team officials had to be escorted out.

Coach Delio Rossi had warned the squad by proclaiming this match the most important of the season, they chose not to listen as they played about 15 minutes of decent calcio and were booed and whistled loudly off the field. Prandelli-era holdovers Riccardo Montolivo and Juan Manuel Vargas, Mihajlovic-era flash in the pan Alessio Cerci and recent pickup Andrea Lazzari were especially pathetic, barely able to beat their men or make a decent pass to save themselves.

Adding to purple dismay was another awful job by the officials, granting a penalty kick on a dive (see pic above) and giving a yellow card to Romulo when there was absolutely no contact with the defender, while ignoring an elbow to the head of Natali, which put La Viola down to 10 men, as they had used all their subs.

Report Cards
Boruc - (6) had two good saves, no chance on the PK
Gamberini - (6) brought some steel to the back line, nearly had a tip in on a corner.
Natali - (4) If you're going to play a three man back line, you cannot have your anchor be an old, immobile Cesare Natali. Either commit to Camporese or bring in a better (younger) man. Maybe play Gamberini there instead and move Cassani back. Something. Don't ever want to see this guy start again.
Nastasic - (6) he's a stud, only complaint would be the yellow he picked up on a rash two footed dive.
Cassani - (5) third match in a week and he looked like he felt it. not really settled in his role yet either. subbed for Romulo late; Romulo - (NA) got a yellow for no contact. not his fault.
Behrami - (6) man of the match, just for effort, as usual. I wonder what he'd look like with real players out there with him.
Salifu - (5) tired. he's still the man. Lazzari subbed on at half; Lazzari - (3) worse than useless, every pass he made was wrong.
Montolivo - (3) should call this guy fantasma, because he's an effing ghost. doesn't want to be here, shouldn't be on the pitch, even if there's no one else. This team would be better if they just gave him away. 15 min of just barely acceptable play and the rest merde.
Vargas - (4.5) he's trying, but he just doesn't seem fit. Can't get around his guy, can't get decent crosses off, maybe it's time to move on.
Ljajic - (5.5) had a few chances he couldn't convert. Adem doesn't do well with pressure and not having any strikers is def putting pressure on him. if the midfield could get sorted, he'd have more of a chance. Cerci Subbed on; Cerci - (3) booed and whistled from the time he walked on the field for the report of his girlfriends facebook posts and his reaction afterwards. past time for him to leave.
Jovetic - (5.5) seemed like he was going at it one on the whole defense. no real team work

Rossi- (6) he tried to warn them, they just didn't listen. When I see Rossi on the sidelines, I think of this Tommy Lasorda quote. Without reinforcements the job may prove impossible.

Coaches Quotes
“This match could’ve been the turning point for our campaign, but instead it went against us. It is my fault because I am at the head of this group,” said the Coach.

“We’ve got to take responsibility and keep moving forward, even if we were unlucky on a couple of occasions.

“I have some doubts over the Lecce penalty, but the fact remains we’ve got to confront the situation that we are in.

“After last week’s Novara game I kidded myself that we had turned the light back on, but instead I understand now it is going to be a season of blood and tears.”