The Toughest Match of the Season: Fiorentina-Lecce

Share All sharing options for: The Toughest Match of the Season: Fiorentina-Lecce 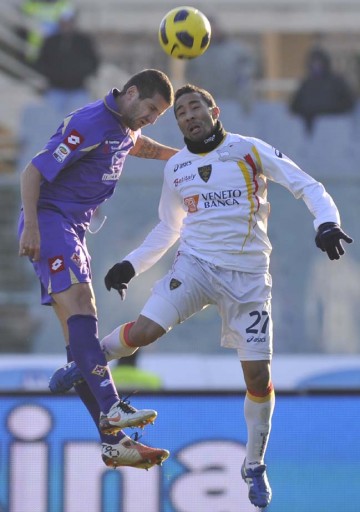 Fiorentina welcome a determined Lecce side that has frustrated the viola on more than one occasion.

A Fiorentina side, still struggling but finally finding a sense of team unity, welcomes a dead last Lecce side to the Franchi, in a match that has nearly always proved stalwart for the purple team. In the 2008-2009 season, Lecce managed to defeat Fiorentina in Florence, and then nearly kept them from the Champions League in the penultimate game of the season if it wasn't for last minute heroics from Martin Jorgensen. Missing the season after in Serie B, Lecce returned to the A last season, where they defeated the viola down south, partly due to a wrongly disallowed goal from the 6th best defender in Serie A, and then later held the viola to a frustrating draw at the Franchi.

Fiorentina are coming off a 3-0 win over Novara with goals from JoJo and Montolivo, and a 3-0 Coppa Italia knockout loss to Roma where the viola dominated the first half, while falling from their opportunistic lackluster finishes in front of goal. Yet the team showed spirit, and the 3-5-2 that Rossi has been favoring seems to be finally showing results. Lecce are coming off a 1-0 home loss to Juve last weekend and are in dead last with 9 points, but 8 of those points have been on the road.

Rossi will field his 3-5-2 much as he did against Novara with Boruc in goal covered by Gamberini, Natali and Nastasic. Cassani will be placed further up-field with counterpart Vargas on the other end, and Behrami, Salifu, and Montolivo covering JoJo and Cerci or Ljajic

Serse Cosmi will field a 4-3-3 with Benassi being covered by Mesbah, Esposito, Ferrario, and Tomovic, while Giacomazzi, Grossmuller, and Olivera cover Di Michele, Muriel, and Cuadrado.

The Tactical Key
What's worked so well with the 3-5-2 is that it liberates the offensive minded Vargas and Cassani into a greater amount of space while allowing more maneuvering space for Gamberini and Nastasic. It also provides depth and better passing for JoJo and Ljajic who have both enjoyed their recent forays deeper into the box. The obvious threats tomorrow are the always dangerous Di Michele and Olivera, both frequent viola poachers. However this is Lecce, and don't ever be fooled by their position on the table.